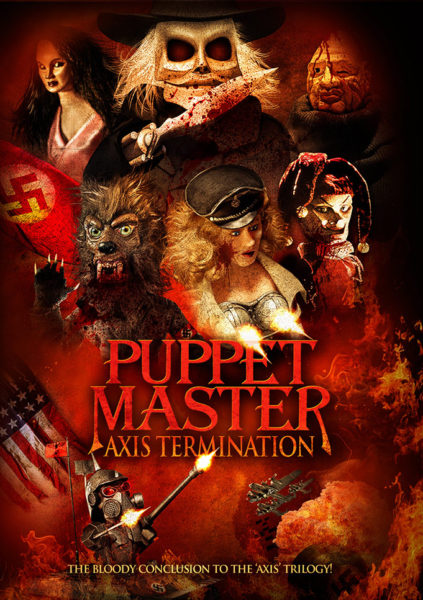 Plot: The ‘Axis Trilogy’ concludes, as the Puppets become the newest weapons in the war between the Nazi’s and the Allies.

If I seemed positive during my negative review of “Puppet Master: Axis of Evil“, it’s only because I made the life altering choice of binge watching the ENTIRE. F@CKING. FRANCHISE…and those wounds have not healed. They will never heal…After watching “Curse of the Puppet Master“, “Retro Puppet Master” and having to endure them all over again THANKS TO THAT F@CKING WHORE OF A CLIPSHOW CALLING ITSELF A FILM known as “Puppet Master: The Legacy“…all in short succession…I was yearning for the subpar quality that both “Puppet Master: Axis of Evil” and “Puppet Master: Axis Rising” offered. But enough time has passed to where I don’t feel like I’d view mere “bad” as an oasis in a sea of…well, “Puppet Master” sequels…I feel like I can accurately judge “Puppet Master: Axis Termination” as the PIECE OF SHIT IT REALLY IS…not? I’m a little confused here, because this actually received the worst reception within the ‘Axis’ trilogy, yet I’m not the one foaming at the mouth in rage? I can’t speak for anyone else, but I will say this…I’ve never been so happy to feel so alone!

“Puppet Master: Axis Termination” is bad, but its incompetence almost always made me laugh. The production values are minimal, so the majority of the scenes take place within a handful of rooms. The props and costumes are suitably phony looking, with creases being visible on the Nazi flag. Blade, Pinhead, Jester, Tunneler, Leach Woman, Blitzkrieg, Weremacht and Bombshell return, with Six Shooter being given a brief cameo, but the effects are a mixture of puppetry, and…get this…actors wearing masks, who are Chroma key’d into the shot… The effect is both surreal and horrible, but I was laughing my ass off and at least they didn’t resort to crappy CGI for bringing the puppets to life. “Axis Termination” is much gorier than its predecessors, but the kills are pretty unimaginative and sometimes do resort to crappy CGI…That’s unfortunate, but I’m glad this had a mean streak, as it’s something this franchise has been lacking for awhile. There are other things to mock though, such as some of the casting choices for the extras (morbidly obese Nazi’s…whom I swear I saw dying more than once) and the shitty presentation (the audio picks up a lot of background noise in one scene). Yet Charles Band does his best to overcome the low budget, with admirable attempts at building suspense and crafting a visual style. I’m not saying he succeeded, but I appreciated the effort. The cinematographer uses green, red and blue gels, giving the film a Giallo aesthetic, making it much more visually interesting than most of these films…at least until you remember that the filmmakers only had a few sets to work with, so they better make these rooms colorful! But the true heroes of “Puppet Master: Axis Termination” are the cast. I can’t call the acting good, but it’s the right kind of bad. Everyone is committed to the material, even though they have to put on ridiculous accents and say absurd dialogue. They know exactly what kind of schlock they’re performing in, so aren’t afraid to go over-the-top. But unlike “Axis Rising“, they don’t go so crazy to where they start becoming irritating. I especially enjoyed George Appleby (Doctor Ivanov) and Kevin Scott Allen (Sturmbahnfurher Krabke), although Tonya Kay (Doktor Gerde Ernst) has one amazing moment herself. They all look like they’re having a blast…and I had a blast watching them…Their characters are so quirky and fun that I ended up being perfectly cool with the previous protagonists getting unceremoniously killed off within the first 5 minutes. I usually hate that shit, but I quickly forgot about them as the new cast was established.

The story is pretty routine…which is strange because it surrounds a dwarf psychic in a battle of wits with psychic Nazi’s…You would think ‘routine’ would be the last word I’d use to describe such a story…and that isn’t even including the killer puppets! Unfortunately, the puppets seemed irrelevant in their own story, even though they have a decent amount of screen-time. They just can’t stand out in a movie where characters can torture people with their minds or rip out their souls. I was also very disappointed we didn’t get a rematch between Toulon’s puppets and their Nazi equivalents. The conclusion was surprisingly anti-climactic and unsatisfying, even though it’s clearly referencing one of the best climaxes of the franchise. Finally, did I miss something or did the female Nazi with ‘Freddy Kruger’ fingers just vanish from the narrative? I don’t recall a death scene, but maybe I wasn’t paying close enough attention…I can’t say I liked everything about “Puppet Master: Axis Termination“, but I did enjoy a lot of stuff that I normally would dislike. This is not a good movie by any stretch of the imagination, but I appreciated the effort that went into the project and was consistently amused. This must’ve been a strange and exciting time to be a ‘Puppet Master’ fan, as a reboot has also been in production. Shockingly, horror fans seem to like it in an unironic way, so I’m looking forward to seeing “Puppet Master: The Littlest Reich“! have to warn you though, ‘Puppet Master’ is probably never going to get its own ‘Compulsive Franchise Disorder‘ critique. I’m willing to keep up with the franchise, but I have absolutely no desire to go back and revisit it…Too many memories…Too much trauma…

Violence: Rated R- Definitely one of the bloodier entries.

Nudity: There is sex and nudity, enough to earn a solid R-rating on its own.

Overall: “Puppet Master: Axis Termination” is my ‘favorite’ of the Axis trilogy and provided the best ‘Puppet Master’ experience since…at least “Puppet Master IV“? That’s a bit of a back handed compliment as I didn’t like that either, but at this point, I take what I can get.