Plot: Tank (Josh Green) is an awkward, but gifted carver who falls in love with Jane (Emily Harrison), but has to contend with jackasses who want to rape her. Also, murderous puppets sometimes show up because Jane’s Father and Tank’s boss (George Peck) is the new Puppet Master. Also known as “Puppet Master 6“.

I have felt a variety of emotions regarding the Puppet Master franchise, some positive and others negative. It had a clumsy start, before finally finding its cinematic sea legs, only to lose its balance and fall harder than it ever had before. But “Curse of the Puppet Master“- which I shall simply refer to as “Puppet Master 6“- introduced me to a new feeling in regards to the franchise: Depression. I expected a piece of shit, but I did not expect to feel this strange need to apologize to and reconcile with “Puppet Master 5“, which I derided as “boring”. And by “boring”, I mean ‘high quality entertainment’ when placed next to “Puppet Master 6“. I comically kept referring to the sleek 79 minute running time of “Puppet Master 4” as a reason why I had no difficulty tolerating its badness. But “Puppet Master 6” is equally short and while I repeated ‘It’s only 79 minutes’ like some sort of mantra, that didn’t make viewing it any easier. Yet I endured this purgatory until I realized that the director was David DeCoteau, who for some reason is credited as Victoria Sloan. Why is this important? Because he had previously directed “Puppet Master 3“, which was good enough to restore my hope that this could be a worthy franchise. But just as he gives, he also takes away…”Curse of the Puppet Master” makes the previous shitty entries look good in comparison.

I was under the impression that this was supposed to be a remake, but that doesn’t make a lot of sense considering the opening credits uses footage from the previous movies. It doesn’t fit within the continuity of its predecessors but to be fair, “Puppet Master 2” practically made this a staple of the franchise. Fans speculate that this takes place between the first and second film, as Leach Woman is alive, while Torch is missing in action again. Pinhead actually gets the most prominent role, although it’s hard to take him seriously as he has been reduced to being the heroines personal Teddy bear. Blade is still important and actually seemed more menacing than usual (!!). Six Shooter Tunneler get one important moment each and Leach Woman doesn’t do anything. Why show Torch in the opening credits if he’s not going to be in the movie? I will admit that the burned puppet was a little creepy, but the new attraction…the one Tank has spent the entire movie building…is f@cking awful. Boring design, crappy effects and it leads to a giant plot hole as IT IS MADE OF STEAL. They talk about the special kind of wood that is required for it…they constantly show him carving into said wood…and yet apparently Tank is so talented that he can turn wood into metal. F@cking brilliant. The special effects in general suck, primarily because they have to rely on stock footage. It’s very distracting when the lighting and film-stock quality changes mid-scene…especially when the older material looks more polished. There is some new puppet footage, but there’s no stop motion animation or any real puppetry. It’s obvious that someone is holding the puppets off-screen and they aren’t even making it look like the props are walking. At least the previous director- who struggled with the SFX- ‘tried’ casting that illusion, but when Blade moves, he’s just being carried forward by an off-screen hand. I don’t know why I’m talking about the puppets though, as “Puppet Master 6” is more interested in the boring-as-f@ck drama. 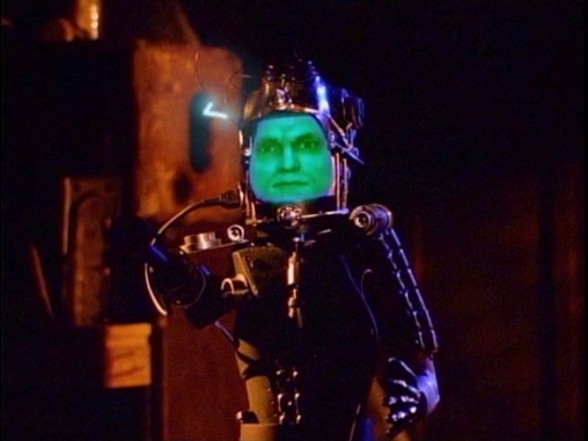 There is ONE horror-oriented scene before the finale, where most of the action and violence is contained. The rest is simply melodrama as Tank and Jane (Emily Harrison) fall in love in about two seconds and talk…and walk…and talk…and walk…and sometimes they will even perform the riveting action known as DRIVING! But just like in a soap opera, there are a handful of one-dimensional douchebags, who like to bully the guy and want to rape the girl. We’ve seen this angle many times before, but rarely do we see it done this poorly. The performances are all awful and it feels like the director couldn’t afford real actors, so recruited his neighbors. Everyone looks like they’re either trying to remember their lines or are waiting for their cues. Some of the actors are too over-the-top in their delivery, while others project no emotion at all. None of their actions come across as natural, so when someone tries to trip Tank, it looks like the offending foot missed and Tank fell down on his own accord. The dialogue is too on-the-nose with the ‘thematic’ material. The character interactions are so unpleasant because everyone seems rude for absolutely no reason…and rude in a cartoonish kind of way, which doesn’t really fit the darker tone of the movie.

I suppose I can place a lot of the blame on David DeCoteau, but it’s obvious he has no money or time to work with. I complained that the fourth and fifth entries seemed cheaper compared to the earlier entries, but at least it looked like they had professional equipment to work with. The camera quality gives the film almost a ‘home movie’ feel and I was very surprised when a boom mic fell into the shot as I would’ve presumed they wouldn’t be able to afford those. It’s easy to bash on the editing for sucking, but it’s nearly impossible to do much with stock footage. This does lead to some amusing continuity errors though. At one point Pinhead is smashed up and presumably dead, but then it cuts to Dr. Magrew who is conspiring with Blade to avenge his friend. The problem is that the stock footage of Blade shows Pinhead RIGHT NEXT TO HIM, before cutting to a scene where we see Tank beginning to repair Pinhead. That’s…really, really, really shitty editing guys. The pacing sucks because NOTHING HAPPENS FOR THE FIRST 50 MINUTES OF THIS 71 MINUTE MOVIE!!!!! Once again, can I blame the director, editor or writer? No, I have to blame the studio for not properly funding this piece of shit so that it can afford more puppet effects. “Puppet Master 6” isn’t trying to be character oriented- not that they were interesting or fleshed out anyway, it just only had enough money for a couple of effects.

There are a few things I must praise…slightly…grudgingly… The dream sequences where Tank imagines himself as a human puppet were alright, although the script never really explains how this works. Is he being drugged? Is it magic? Is Toulon warning him of danger? Everything else is so intolerable that honestly, I don’t even really feel like talking about the shit writing- which relies on coincidences to drive the plot and is too afraid to actually explain anything. Why do the Puppets turn on their Master? Wikipedia claims that it’s because they respected Tank, but shouldn’t they have done something to stop Magrew? I presume the filmmakers weren’t really thinking about that and just wanted to remind us of “Puppet Master“, as if the stock footage hadn’t done enough of this. Oh wait, I’m supposed to be praising the movie right now…While you have to wait for almost an hour, the first kill is pretty effective. I won’t call “Puppet Master 6” gory, but the (few) kills are very bloody and DeCoteau brings back the vicious edge that has been lost since “Puppet Master 2“. The puppets are anti-heroes, although we are reminded that they can- and will- kill anyone if their Master orders it. The rest of the violence occurs during the finale and it’s…alright. Not worth the wait, but at least subpar horror is better than awful melodrama. Finally, I really dug the use of the franchise’s trademark music. I’ve never really mentioned the score, which has that twisted carnival motif going on, probably because it usually only appears in the opening/closing credits. But “Puppet Master 6” relies a lot more on it, so that’s something. Yet any positive that can be mentioned drowns in a sea of negativity. “Curse of the Puppet Master” is irredeemably terrible and shouldn’t have been made, no matter how desperate Full Moon Entertainment was at the time. If I was a fan during 1998, I would sever all ties as a viewer with the company and the franchise. Even now, I’m dreading the rest of March Franchise Month…

Overall: “Puppet Master 6: Curse of the Puppet Master” is a new low for the franchise- which is already no stranger to lowering the bar. Even if you’re a completest, I wouldn’t waste time on it.