Plot: A young scientist (Gordon Currie) discovers and re-animates the demonic puppets, which turns out to be perfect timing as he has drawn the ire of a demon- who uses the same powers that gives the puppets life and wants him dead. This new antagonist sends his own demonic totems, which will lead to a battle of…not so epic proportions.

“Puppet Master 4” was such a step down from the shockingly good “Puppet Master 3” that it lost its balance on the cinematic staircase and somehow managed to fall beneath the ‘not very good’ original. I don’t believe that the movie is entirely to blame, as this entry was produced during an awkward time for the horror genre. The 90’s cliches were beginning to crystallize, which meant scientists would now be played by hip youngsters, even though that makes no f@cking sense- but that was the trend. Horror was becoming softer, not wanting to kill off potentially popular characters and for whatever reason, society was sneering at violence-in-film. This meant reduced gore and deaths, which was a death blow for the genre. Meanwhile, Jason Voorhees, Michael Myers and Freddy Krueger were suddenly getting commercialized, so why wouldn’t Full Moon Features wish the same for their own horror icons? While watching this movie, I kept feeling like this was one big marketing campaign for toys, which I probably would’ve bought as a kid. Finally, the golden era of B-movies had come to an end and horror features were no longer major cash draws, which meant drastically reduced budgets. “Puppet Master 4” seems cheaper than previous entries of the franchise, which is strange because it boasts such a high profile concept (killer puppets vs demons). But it’s also just a bad movie that finds any semblance of redemption by providing lots of unintentional hilarity. Plus, at least it’s very short.

From the opening scene, the viewer is torn between laughing at the special effects and groaning at the realization that these are the special effects. The set itself is far more ambitious than it should be, but that demon looks absurdly goofy and you will only be able to pay attention to his hammy antics and unconvincing suit/puppetry. The totems, which are his own demonic toys, definitely have cooler designs and look good when stationary. But when in motion, the phoniness really stands out and you won’t be able to take them seriously. What about our beloved demonic puppets? Blade, Pinhead, Jester, Tunneler and Six Shooter all return, boasting the same designs as before. Unfortunately, they don’t seem as mobile and the way Jeff Burr frames every shot makes it too obvious that a puppeteer is holding them off camera. The lowest point is oddly when they’re playing laser tag, as apparently the filmmakers forget to fill in some of the lasers. But while I have seen worse, the previous three films had much better effects, so the step down is noticeable. The fights between the puppets and totems reminded me a lot of a kid mashing his toys together and making grunting noises. The idea sounds cool, but I thought the battles were too one-sided in the puppets favor. There isn’t any tension because the Totems only seem really threatening to the disposable human characters, while they’re clumsy and weak when against anyone relevant. Decapitron is the newest puppet and I didn’t really understand how he worked. Does he contain Toulon’s soul? Why is he treated as the only hope against the Totems when the other puppets seem like they should be able to handle them easily? I love how the humans and other puppets just stand around watching as Blade fights during the finale. Why doesn’t Six Shooter shoot anything? What does Jester do? Why do they keep saying Toulon stole the power of the demons when the Egyptian Sorcerer was the one to do so? How come Blade is alive while the other puppets remain dormant? Why do the demons need the totems? Why don’t the Totems team up? WHY IS THIS SCREEN-PLAY SO DUMB?! *sigh*…At least it’s short. 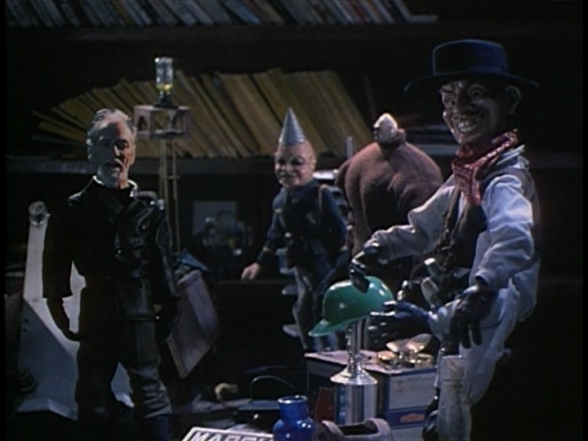 Jeff Burr’s attempts at style tended to back-fire, usually resulting in unpleasant or silly looking visuals. He tries his hand at building atmosphere and suspense, but they’re so over-dramatic that they also end up being unintentionally funny.  Whenever Guy Rolfe shows up as Toulon, it’s through Decapitron and this effect is rendered by superimposing his head on the puppets body. There is nothing about these moments that suggest I’m supposed to be laughing…but I am laughing…Laughing hard…If anything, Rolfe’s sincere performance while his head is attached to that body only makes it funnier. But I will say this, because I was laughing at “Puppet Master 4“, I was being entertained- if for the wrong reasons.

Fans might be pleased to know that Blade has finally taken the center stage of importance among his group, whereas before Jester played that role. Jester barely gets any screen-time here, but Pinhead gets a decent sized role. Six Shooter’s ‘yuk yuk’ laugh got on my nerves. Why did he have to replace Torch? Tunneler has one memorable scene, but barely registers. Decapitron has potential to become cool, but I doubt it will happen during the era of PC-horror. The human characters are cliches, but I have to admit that I found Gordon Currie to be endearing as the hero. I got giddy when he plays laser tag with Pinhead and Tunneler. I can’t stand characters like Cameron because it becomes obvious who will be victim #1. I think I would’ve liked “Puppet Master 4” as a kid, as I would’ve loved the good guy turn from the puppets. Make no mistake, this is a bad movie, but I can’t say it was a boring one. I began laughing at its failures immediately and never stopped. “Puppet Master” might deserve more praise, but its blunders tended to annoy and frustrate me a lot more- plus, it’s soooo slow. “Puppet Master 4” is vastly inferior, but was closer to being a ‘fun’ experience. Plus, at least it’s short. I have to confess though that I had a heated debate with myself over the rating, as I felt 2/4 stars was a bit generous. But then I watched “Puppet Master 5“…and I hear that is better than what comes later…I’ve seen “Puppet Master 5” and am about to watch the 6th entry, so something tells me that I’ll be longing for the badness of “Puppet Master 4” long before I’ve completed the franchise…

Note: What you have just read was my second review of “Puppet Master 4“. My original version had only been completed a few hours prior, but was deleted because of a glitch. It also seemed to be a much smoother read, so I apologize if this one seems rushed and sloppy compared to my other works. Re-writing the same review can be demoralizing, frustrating and exhausting- which this was.

Violence: Rated R. Not as violent though.

Overall: “Puppet Master 4” can be enjoyed on a ‘so bad, it’s good level’. At least it’s short.