(Directed by Everyone else and Charles Band)

(Written by Everyone else and C. Courtney Joyner)

Plot: An assassin (Kate Orsini) interrogates the newest Puppet Master (Jacob Witkin) about Toulon’s formula for transferring souls into puppets, so he tells her about the history of this franchise- via stock footage.

I was sure that this franchise could not go any lower than “Curse of the Puppet Master“, but here I am, in utter awe of the contempt that Charles Band must have for his fanbase. I’m aware that his studio had fallen on hard times, but there is never ANY excuse to cheat your target audience by relying almost ENTIRELY ON STOCK FOOTAGE. “Puppet Master: The Legacy” does not even deserve to be a recipient of my wrath, being far beneath “Retro Puppet Master” and “Curse of the Puppet Master“, because it’s not even a movie. It’s a clip show that markets itself as a movie. There’s 10-20 minutes of new footage, but that is merely an excuse to justify the use of clips from the previous flicks. During this time, we learn that Peter (the kid from “Puppet Master III“) has become the new Puppet Master, Rick Myers (protagonist from “Puppet Master 4” and “5“) has been murdered and…That’s it… There is a cliffhanger ending, but I’m still trying to understand what actually happened. I’m guessing that the Retro Puppets (“Retro Puppet Master“) were the ones behind all of this, which would admittedly lead to a pretty cool sequel if it was produced by anyone who hasn’t been involved in the death of this franchise. But it’s ambiguous to the point of giving me a headache and “Puppet Master: The Legacy” is not worth the train of thought. I guess I did like the debate as to whether Toulon was good or evil, but even that was probably only present so they could show footage from “Puppet Master 2“- where Toulon was the antagonist.

Despite attempting to tie up all the loose ends, I somehow ended up being even MORE confused than I was before. Instead of successfully explaining all of the unanswered questions, “Puppet Master: The Legacy” only manages to draw attention to how screwed up the overarching continuity is- although it is also certain to f@ck up its own continuity as well. When Peter (who goes under a new name for some reason) starts playing the tape, the scene fades to Toulon (Guy Rolfe) beginning his story from “Retro Puppet Master“, with the implication being that he recorded that entire conversation (for some reason). Yet whenever we hear Toulon’s voice from the tapes- which often plays over this stock footage, he doesn’t sound anything like Guy Rolfe. But this is merely the tip of the iceberg for this criticism, as Toulon somehow manages to be played by four different people over the course of this film because of the F@CKING STOCK FOOTAGE and that isn’t even including the voice over. At another point, Peter starts recapping from his own POV about the events of “Puppet Master 3“, but Toulon’s voice continues to narrate! When they reach the ‘Puppet Vs Totem’ battle of “Puppet Master 4“, Rick’s voice explains what happens, so does this mean he recorded over Toulon’s tapes? Because Toulon resumes the narration afterwards and he was supposed to be dead by the time Rick took over. See? THIS IS F@CKING CONFUSING! 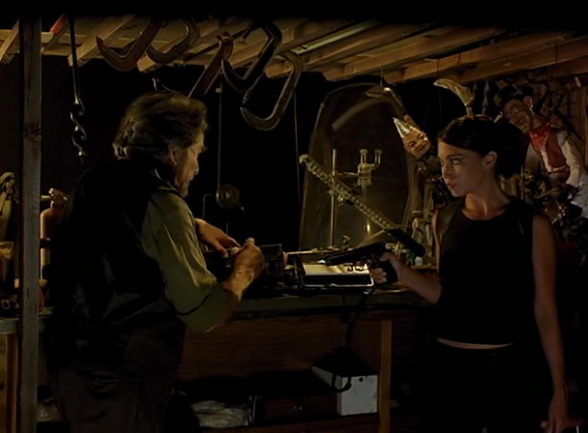 There is WAY too much time is spent on what occurs during “Curse of the Puppet Master” considering that it was a side-story, adding nothing new to the overarching plot. The context is Toulon complaining about how others have abused his research, which is a flimsy justification to recap what is essentially filler, but how does he know all of this? He wasn’t there! It’s commonly believed that “Curse of the Puppet Master” takes place before “Puppet Master 2” (because Leach Woman is still alive), so if we accept that the puppets can tell him what happened even though they can’t, does this imply that the insane, undead Toulon from “Puppet Master 2“) is doing the chronicle? That might explain why Toulon sounds more unhinged in contrasts to Rolfe’s soft delivery, but when would there have been time to do this? The 2nd film takes place almost immediately after the first, so- *sigh*. I feel like I am validating this as a movie by talking so much about it…But “Curse of the Puppet Master” could not have taken place between the first two movies and shouldn’t have been so prominent in this recap. Why would you want to even show so much of that piece of shit that is still not quite as shitty as “Puppet Master: The Legacy“? I thought it was odd that there was very little footage of the original “Puppet Master“, only confirming my claim that the primary storyline of that film was filler. They don’t show a lot of “Puppet Master 5” either, also confirming the worthlessness of 75% of that running-time, but they could’ve at least included the death of Sutekh. Yet both of these snubbed Puppet Master entries are far, far, far, far, far, far, far, far above “Puppet Master: The Legacy” in their 2/4 and 1.5/4 star glory.

You have to love the amazing editing skills on display. Using stock footage is bad enough, especially when the video quality changes between 35mm and shot-on-video (not to mention characters changing actors FOUR times), but they screw up the order of occurrences for absolutely no reason. During the “Puppet Master 3” segment, they show the Gestapo Officer ordering Toulon and his Puppets (including Pinhead) be thrown into the car, but then it cuts to one of those puppets (Pinhead) killing a doctor and then it cuts to Pinhead being with Toulon in the car. That is obviously how much Charles Band cares about his movie, if it can truly be called a movie since it’s more of a clip show. I can’t even say it’s a “best of” special because too many of them suck! If anything, the title is pretty fitting. This is the legacy of the Puppet Master franchise, which had already begun cutting corners to save money as early as “Puppet Master 4“. They got cheaper and shoddier to the point where “Puppet Master: The Legacy” simply had no more corners to cut . No budget, more stock footage, negative quality. Ugh, this is the shit that makes me question my life choices. I just realized that I’ve practically watched “Curse of the Puppet Master” and “Retro Puppet Master” twice…in one week…together…On second thought, my wrath cannot be contained. Fuck you. I’m not even going to censor that. Fuck you “Puppet Master: The Legacy” and fuck the franchise that allowed you to be created in the first place.

I still got three fucking more of these fucking pieces of shit to fucking get fucking through. FUCK!

Nudity: I don’t remember any, but there might’ve been form some of the stock footage. There is a lot of sucking and blowing though. Fuck.

Overall: Fuck “Puppet Master: The Legacy” and fuck myself for watching it.