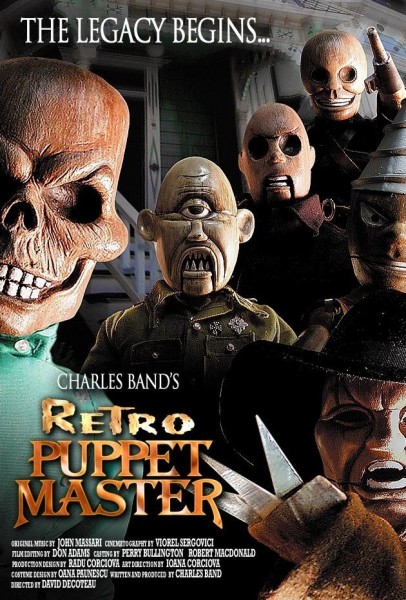 Plot: Andre Toulan (Guy Rolfe) recounts the story of how he acquired the ability to create living puppets. As a young man (now played by Greg Sestero), he encountered an old sorcerer named Afzel (Jack Donner) and inherited his powers…and his enemies…

“Curse of the Puppet Master” was soul crushingly bad and by soul crushing, I mean you could practically see Charles Band, David DeCoteau and their disposable screen-writer driving a steamroller over the franchise’s soul for 79 minutes…although watching that would probably be more entertaining than actually beholding “Curse of the Puppet Master“.  My viewing experience left me defeated, depressed and done with Puppet Master. I eyed my calendar with wariness as “Retro Puppet Master” loomed ahead- a film that has been sometimes argued as INFERIOR to the 6th, a prospect more terrifying than ANYTHING the franchise has produced- and found myself skipping the date. I just couldn’t muster up the strength to watch it. Yet I finally came to the conclusion that it’s better to castrate yourself quickly with a fork than slowly with a spoon, so finally pulled the stupid movie up on Hulu. Shockingly, I found myself feeling hopeful as Guy Rolfe reprised his role as Toulon one last time before he passed away. His warm interactions with the puppets were charming and just as a smile crept up on my face, he began telling a story of his origins….

and he was now being played by the asshole friend from Tommy Wiseau’s “The Room“.

“Retro Puppet Master” sucks, but I guess I have to concede that it’s a step up from its predecessor. Fans tend to hate it a lot more than I do, which REALLY says something as I hate this movie too, but I think they’re being a little biased. This is not intended to be horror, instead outright embracing the fantasy genre and maybe even being geared more for children. There’s no suspense, gore or anything to suggest we’re supposed to be scared. I found this a little baffling as the Retro Puppets have impressively creepy designs, but the atmosphere surrounding them is more whimsical. The real reason why “Retro Puppet Master” draws so much heat is that Blade, Pinhead, Jester and Leach Woman get insignificant cameos while their retro versions take the stage. Admittedly, despite having cool appearances, they’re nowhere near as memorable or interesting. But I think that the filmmakers were just experimenting with something different and while it backfired, this does imply that someone behind-the-scenes cared for the project- misguided as it was. The existence of “Curse of the Puppet Master” really does this movie a lot of favors, as while it fails in almost every regard, I kept thinking “at least it’s not “Curse of the Puppet Master“. The dialogue might be bad, but it’s not THAT bad. The production values might be very, very minimal, but at least this feels like a real production and not like a fan film calling itself a sequel. I can’t bring myself to praise the special effects, but I can call them special effects. What I saw in “Curse of the Puppet Master” was more akin to a child holding up his toy in front of the camera. And stock footage…We must not forget about the f@cking stock footage…But at least “Retro Puppet Master” never resorts to that! 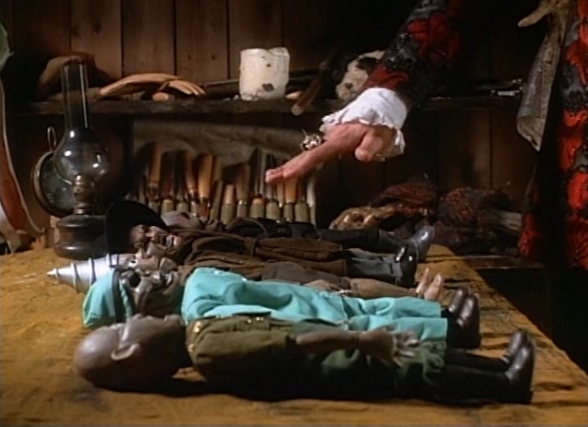 The acting is just as terrible though, maybe even worse. While the setting is Switzerland, I have no idea where this was filmed, but most of the supporting cast sound like they’re speaking a second language. Their delivery of dialogue is more wooden than those wooden puppets! Of the primary players, Rolfe is strong in his cameo and Jack Donner (Afzel) was acceptable in his limited screentime. Greg Sestero was horrid as young Toulon, although maybe the accent restricted him. Every line is delivered with the same amount of emotion- which is none- even when he’s reacting to love confessions, his friends dying and puppets coming to life. The man has no charisma as a leading actor and I think he did better in “The Room” *shudders*. The villains were also pretty terrible, but I blame the writing and directing because obviously they were told to act that way. They’re supposed to be Mummies with supernatural abilities, but you’ll forget their origins almost immediately because they don’t resemble mummies and the voice filter was corny. I also wasn’t fond of their tendency to parrot each-other. “Curse of the Puppet Master” had no redeeming performances, but at least the cast appeared to be enjoying themselves, even if their amusement is not contagious for the audience. The supporting cast of “Retro Puppet Master” looked like they did not want to be there and just mumbled their lines without enthusiasm or effort. While a technical improvement over “Curse of the Puppet Master“, I am sad to say that it is just as boring. You’ll have to wait 50 minutes before shit starts to happen and whereas the previous film at least had some decent kills, none of the action here ever really woke me up. It’s all…very lame. “Retro Puppet Master” relies too much on its leading actor to carry the film and obviously he was not up to the task. I got bored. I got drowsy. I had to rewind because I fell asleep.

Despite delivering the cool “Puppet Master 3“, I have come to the conclusion that director David DeCoteau had merely gotten lucky and is in fact…a hack- albeit one who presumably can work fast and cheap. I guess his direction is sharper here than it was in the last one, but it’s still not very impressive. I couldn’t tell whether certain scenes were supposed to be funny or not, but I can’t imagine anyone taking these new villains seriously. He lets awful performances slip through his fingers and has no interest in pacing. He shoots the first action sequence entirely in slow motion, probably just to stretch out the running-time as it adds nothing. The ‘Slo-Mo voices’ were unintentionally amusing though. The sorcery effects were crap, although maybe that was intentional because it makes the puppet SFX look significantly better. Neal Marshall Stevens (the writer) over-reached, opening with the love interest (Ilsa- played by Brigitta Dau) but seemingly forgetting about her for large chunks of the film. What was the point of the guards working for Ilsa’s Father? One is set up as a major antagonist to her, but that story-thread never goes anywhere and I’m not even sure if he’s one of the guys who was killed by the true villains. “Retro Puppet Master” teases us with ‘clues’ for the characterizations of Toulon’s troupe and their relationships with him, but they never go anywhere either. The continuity continues to be f@cked up, but at this point I simply don’t care. The franchise is f@cked. I guess I should be happy enough that this script has real content, but when said content doesn’t connect firmly to the narrative, then it might as well be filler. So yeah, “Retro Puppet Master” won’t plague my dreams, but it was a bad idea crossed with an even worse execution…

…I’d still take it over “Curse of the Puppet Master” though!

Violence: Even though people die, there isn’t much violence.