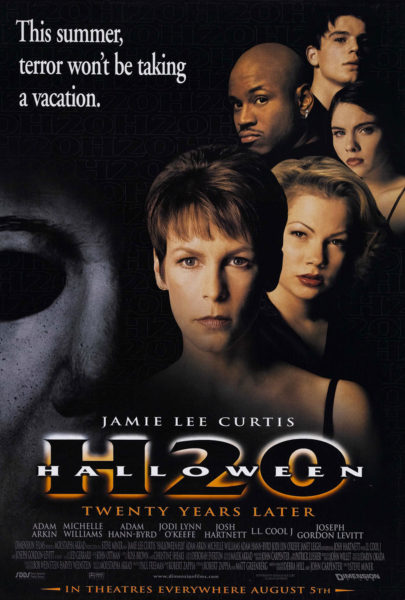 Plot: Scrubbing “Halloween 3” through “Halloween 6” from the canonical continuity, Laurie Strode (Jamie Lee Curtis) changed her identity following the events of “Halloween 2“, convinced that her maniacal, indestructible serial killer of a brother Michael Myers is still out there. Her paranoia creates tension with her son, John (Josh Hartnett), who thinks she needs to move on. But this being a slasher sequel…

“Halloween: H20” is the most divisive of the Halloween sequels, which is an impressive accomplishment considering how… seemingly every Halloween sequel is at least somewhat divisive… “Halloween II” is either as good as the original, an OK follow-up or just another slasher. “Halloween III” is either a travesty for not surrounding Michael Myers or an underappreciated gem that was unfairly maligned for not surrounding Michael Myers. “Halloween 4” is either the best of the sequels, or a bland slasher devoid of any inspiration. “Halloween 5” either sucks or… it sucks even worse… “Halloween 6” was either redeemed by its producers cut, or even worse because of its producers cut. Rob Zombie’s remakes are either disrespectful for doing their own thing, or deserve respect for doing their own thing. “Halloween: Resurrection” united the fanbase for the first time in years, albeit by drawing everyone’s ire, but is it the worst? Or is it merely among the worst? The only divisive element of “Halloween (2018)” was the knowledge that it was the third film within the same franchise to have the exact same title. Yet I’d argue that in most of these cases, there is a grudging respect amongst the conflicting sides, muting the noise they’d usually make. Fans of “Halloween III” understand why it’s so controversial, while its detractors acknowledge why it has fans. Yet depending on who you ask, “Halloween H20” deserves to be recognized as being one of the best of the sequels… or one of the worst of the sequels… I do not like this movie; never have, never probably will; yet admittedly my disdain for “Halloween: H20” isn’t really about the movie itself. I suppose when you look at its competition in the late 1990’s, it’s no worse than the vast majority of 1990’s slasher flicks, yet it somehow embodies everything I hated about the genre at the time. It embodies everything I hate about the Halloween franchise in general.

My problem with this brand is that despite the original “Halloween” being a trendsetter, the sequels mostly hopped on whatever bandwagon was popular at the time, sometimes even being derivative of movies that the first one probably helped inspire. Say what you will about the exploits of Freddy, Jason or even the lesser slasher icons, at least their franchises developed their own personalities over time. “Halloween: H20” was no different than the previous sequels, except this time it’s cashing in on the “Scream” craze and this marriage does not work in the slightest. I’m a pretty big fan of “Scream“, but I can’t stand any of its imitators, even the supposed better ones. The referential humor that “Scream” popularized can be funny, but most of these movies came across as smug, mocking tropes and cliches from the 1980’s, while being slaves to even dumber tropes and cliches from their own decade. I hate “Exposition 101” scenes, where characters will coincidentally be discussing the plot or the thematic material of the story during class. It’s lazy and yet the 1990’s loved using the classroom for exposition. Furthermore, constantly referencing superior movies just makes me want to watch those superior movies instead. Janet Leigh makes a cameo in “Halloween: H20” for two reasons — she’s the real life Mother of Jamie Lee Curtis and she starred in “Psycho“. When she appears and even shows off her iconic car from “Psycho“… complete with a musical cue from “Psycho“… it’s distracting because it doesn’t go anywhere and feels tacked on. If they wanted to do that, wouldn’t it have been cooler if she had some sort of confrontation with Michael? But nope, they have to sink a few minutes into this gratuitous reference, even though absolutely nothing comes of it. This is just so much of why I disliked this trend and it’s embarrassing watching “Halloween: H20” desperately try to look ‘hip’ by doing the same thing.

Director Steve Miner is a veteran of the horror genre. He helped define the “Friday the 13th” franchise, while also giving us cult favorites such as “House” and “Warlock“. Yet after seeing this again, I’ve come to the conclusion that his experience ended up being a disservice to the movie. He uses a lot of scare tactics from the 1980’s, even recycling one of his classics from “Friday the 13th Part 2“, but they seem very archaic when the movie itself is practically winking at the audience, as if mocking these scare tactics for being old fashioned. He relies a lot on Michael popping up in the background, unnoticed by his intended prey, accompanied by dramatic scare chords. This happens so often that it not only starts to get old, but it almost becomes comical, not helped by these scenes being interlaced with explicit humor — such as LL Cool J reading erotic fiction to his wife. The comedy deflates any sense of tension and quite frankly, isn’t that funny. The Halloween theme does play from time to time, but apparently the original score was scrapped because it was considered too old fashioned, but the more modern music ended up… guess what? Making the actual Halloween theme seem old fashioned. The visual style is lacking, but only because it’s aesthetically reminiscent of all 1990’s slashers, which wastes Miner’s abilities to create atmosphere and mood. The movie is too short and the pacing too swift to build up suspense or work in any eerie imagery. Miner’s horror flicks were usually gory too, but the kills here were few and lack teeth, because the late 1990’s frowned upon graphic violence. Michael Myers has definitely seen better days himself, as he’s wearing a mask that looks so lame it had to be altered via CGI for one scene because it was ruining the scare — which it does anyway, because the CGI stands out awkwardly. This Michael is neither as imposing as any of the other Michaels, nor is he as mysterious or creepy. This may have been intentional, as there was originally going to be a surprise reveal that this Michael was a phony copycat killer and “Halloween: H20” does sometimes foreshadow this twist; only to do absolutely nothing with it. To be fair though, it was a stupid idea that wouldn’t have worked for the same reasons it didn’t work for “Friday the 13th Part 5“.

The script isn’t all that helpful in being scary either, as most of the screen-time surrounds Michael stalking various supporting characters who we don’t care about. They build up John (Josh Hartnett) as Michael’s actual target, so it only makes sense to completely remove him from the finale. Because his character lacks any real pay-off, every scene with him and his friends seems superfluous in hindsight. The sad thing is… the cast is really trying their hardest to make this work. Jamie Lee Curtis might’ve called this a paycheck role, but she really commits to the material and to the writers credit, the script gives her plenty to work with. The scenes with Laurie and John showcase so much raw emotion that I actually think Jamie Lee Curtis and Josh Hartnett could’ve carried the movie on their shoulders if the focus was on their relationship. But they share like four scenes together and most of the screen-time is spent on either Laurie’s love life, her son’s circle of friends or LL Cool J”s hijinks… and references… So yeah, I’m obviously not a fan of “Halloween: H20”, but do I understand why it has passionate supporters? Kind of?

I think people appreciate “Halloween: H20” because it does make an earnest attempt to be something more than just a slasher. When you think about it, the majority of this genre doesn’t really go deep into the trauma their survivors face after the end credits role. The decision to make Laurie Strode an emotional wreck, a functional alcoholic whose paranoia is damaging the relationship with her son, was a bold one. In the context of 1998, slashers were known as superficial thrill rides that weren’t interested in such weighty material, so “Halloween: H20” does have some heart. It has some ambition and it deserves to be recognized for it, especially as Jamie Lee Curtis and Josh Hartnett do an exceptional job at selling the drama. But even under that context, I’d argue that “Halloween: H20” hasn’t aged well because over the years, many other slashers would adopt similar themes and explore them a lot more thoroughly — “Halloween (2018)” included. Nevertheless, I am glad “Halloween: H20” happened as it did keep the franchise from downgrading to the world of direct-to-video, which was the original plan before Curtis signed on. I can talk all the trash I want, but the fact of the matter is… the movie was successful at the box office and even gained decent reviews from critics, even if it’s very divisive amongst us fans.

Violence: Rated R, but it’s not that graphic.

Nudity: None, although characters talk about sex.

Overall: “Halloween H20” is a misfire, but it has enough fans that one shouldn’t immediately dismiss it. Just because I don’t like it, it doesn’t mean you will share my feelings.