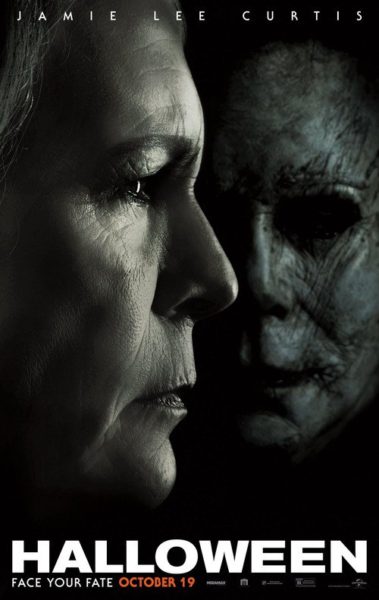 I’ve always felt that Michael Myers was at his scariest when his motivations were too abstract for the sane mind to truly comprehend, so when “Halloween II (1981)” revealed that Laurie Strode (Jamie Lee Curtis) had been his sister all along, it…probably guaranteed that “Halloween” would have a long shelf life as a franchise…For what it’s worth, I did begin this sentence with the intention of criticizing the infamous creative decision, as it strips away the mysteriousness of Michael’s actions. But considering that the sequels focused on him terrorizing his nephews, nieces and Busta Rhymes, it’s safe to say that the bloodline gave the franchise something to explore…even if it meant the deterioration of the “Halloween” namesake. Yet the saga had run out of steam twice over, so I think this was the right time for the franchise to get a little bold. I was enthusiastic when I learned that this 2018 soft reboot was ignoring the events of ALL of the sequels, meaning there was no relation between the protagonist and antagonist, returning Michael to the humanoid puzzle whose ‘reasons’ are just as unclear as they are irrelevant. I might have been a little confused when Danny McBride and David Gordon Green were attached to do the writing and directing, as they specialize in comedy, but they were saying all of the right things to appease my inner-fanboy. Their involvement suggested that the studio believed in their vision and were willing to take risks for it. Even John Carpenter seemed passionate about this project, agreeing to provide the score, something he hasn’t done in a long time. I never thought I’d see Jamie Lee Curtis back for a “Halloween” sequel either and when you think about all of the continuities within this franchise, Laurie Strode has probably died and been resurrected enough to become a slasher icon herself. Just as my excitement seemed like it could soar no higher, the trailers were released AND…I was a little underwhelmed…Unfortunately, this ended up reflecting my feelings towards the film itself, as I left the theaters feeling pretty underwh-Oh, I’m just kidding. “Halloween (2018)” is my new favorite sequel, defeating “Halloween 4” in knife-to-knife combat.

I will say that there were a few creative decisions I’m not entirely sure I liked. There’s one twist in particular shortly before the third act that I’m still not sold on and another character whose existence lacked a good pay-off. I’m not condemning these elements as bad writing, as the filmmakers were clearly playing with our expectations in a way that might be clever. I’m simply still debating with myself whether I was satisfied with these deviations from the formula. I also feel like the narrative was inherently flawed, as the POV characters were shifting between too many people, so the supporting cast weren’t on-screen enough to be fleshed out. WITH THAT SAID, it’s fine because I thought the cast was likable and entertaining enough to overcome their limited screen-time. Whenever they said something funny, I would smile- if not laugh- and a few times even surprised me by defying their usual characterizations. I was not expecting certain people to risk their lives for someone else, so when they themselves are in peril, I was concerned for them. Tonally, “Halloween (2018)” is the closest of the sequels to recapture the atmosphere and mood of the original classic. The cinematography is very voyeuristic and David Gordon Green devises some interesting, unconventional visuals to get under the audience’s skin. We briefly see Michael killing someone in a reflection, but the filmmakers do little to draw our attention to the murder, making it a creepy background event. The subtlety there got me more than a jump scare would have, although it should be noted that the film still has plenty of jump scares too, which were more than earned. I loved how there was always a reliable source of light, completely surrounded by darkness. This made Michael’s sudden appearances scarier, as you really feel like he can be anywhere. Even though there are a lot of visual nods to the original film…and they’re often good and spooky, a rarity for films that rely on nostalgia…the filmmakers also come up with their own techniques to build tension and provide thrills. The scene where Michael is first confronted with his mask, only for the rest of the inmates to start freaking out, was creepy in a completely unique way. The opening credit sequence is brilliant, as we see a flattened Pumpkin slowly inflate to its original form, accompanied by the iconic theme and classic orange text. There’s also a phenomenal tracking shot that alone is more polished than the entirety of the sequels. The music is a recreation of the original score, hitting all of the familiar beats, while adding its own flavor. As memorable and awesome as the “Halloween” theme has always been, this is the first time in a long time where its intended effect was to be unnerving, not exciting. “Halloween (2018)” is very violent, but in a more subdued way than you might expect. I found the kills to be more unsettling and brutal than disgusting, so the graphic violence serves as a strong pay-off to the suspenseful build up.

The cast is exceptional overall, but I really appreciated what they did with Laurie Strode. Jamie Lee Curtis gives an intense, yet very emotional and vulnerable performance. I thought it was really compelling how it’s suggested that she has dealt with the trauma of “Halloween (1978)” by becoming a monster herself. Both Michael and Laurie are determined to settle who the predator of their relationship truly is, which is a fascinating idea that the filmmakers utilized effectively. There are some call-backs to their encounters in the original film, except this time Laurie gets to be in Michael’s shoes, even though this never makes Michael seem any less threatening. Furthermore, Michael is not the machine the sequels presented him as. He’s still unnaturally strong, but you can tell age has limited him, so he has to be craftier than he was before. The final shot did leave me a little unsatisfied though, especially when you consider that the original left behind some of the most haunting final images of all time. This ending is just sort of abrupt, lacking any real sense of closure or even a sequel hook. Yet “Halloween (2018)” is what I want most of these soft reboots to be. It doesn’t spend all of its time reminding us of how great the original was, but instead recreates much of what made the original work…while also creating new memories, new thrills and new chills, so that it can stand on its own. The only thing it needs is a more distinguishable title…There are now three movies within the same franchise that share the exact same title and that’s just unnecessarily confusing.

Violence: It’s not the goriest of the franchise, but in some ways it’s the most disturbing and brutal.

Nudity: A little bit, taken from footage of the original film.