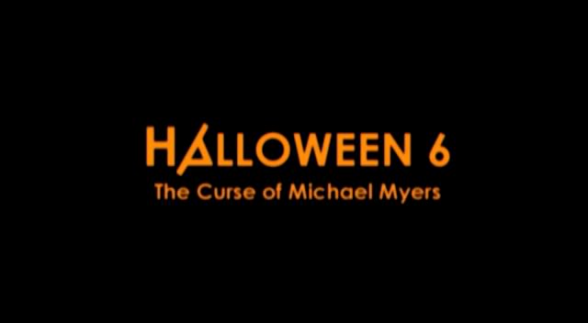 When I heard that the infamous Producer’s cut of “Halloween (6): The Curse of Michael Myers” was finally being released, I was so happy that I practically skipped to ebay, which lead to me trampling my computer screen. My excitement dimmed when I saw the price-tag. You see, the copy was only being released as part of the limited collector’s edition for the Blu-Ray, which goes for around $100.00. I swore I would wait until someone uploaded it to the internet, but my curiosity was constantly peering at me through my window, while dramatic lightning flashes appeared in the background. It was that spooky time of the year when I feel compelled to visit the house of Michael Myers and when the Man in Black told me to ‘kill for him’, I took it as a sign to make the purchase. For those unaware of the controversy which surrounded this project, the final, theatrical cut of “Halloween: The Curse of Michael Myers” was very different from the original workprint. Unfortunately, the combination of poor test screenings, the death of Donald Pleasant and the clashing egos and growing insecurities of those involved with the production lead to it being completely repackaged. New footage was shot, a new score was composed, the kills were gorier and everything was re-edited- which many felt contributed to the poor reception of the theatrical version. The original cut of the movie promptly became an urban legend until it made a few sporadic appearances as a VHS bootleg, but only a lucky few (and presumably wealthy) viewers would get the opportunity to sample it…Until now…As much as I want to say I just viewed a classic, I found myself a little disappointed. “Halloween 6: The Producer’s Cut” fixes a lot of the problems which plagued the final version and the suspense is much more effective. Yet the behind-the-scenes drama was far more intriguing than the actual product. I thought it was kind of underwhelming, even if the film is a pretty solid slasher-thriller.

If you haven’t read my review of “Halloween 6: The Curse of Michael Myers“, you should know that I don’t share the vitriol of my colleagues. I agree with the majority of their complaints, especially when it comes to the script, but I enjoyed its unique visual style and brutal kills enough to keep me reasonably satisfied. It doesn’t fit my definition of ‘good’, but I believe people exaggerate when calling it ‘bad’. “Halloween 6: The Producer’s Cut” lacks the flashy editing, electric score and heavy gore- which can either be a praise or criticism, depending on YOU. That might be a re-occurring theme of this review, because my reactions had less to do with what was better or worse and what I merely preferred. The Producer’s cut is definitely paced more like the original, having a slow burn style of suspense. Various shots tend to linger a lot longer, which helped create a stronger mood. I agree with those fans who claim that the atmosphere is much more effective, even though we’re seeing a lot of the same footage. Once again, I am reminded of the importance of editing and how it’s not just about connecting the scenes. Every stalk sequence had me shivering in my boots, which is especially impressive considering I wasn’t wearing anything. Is it as scary as the 1978 classic? No, but the suspense is on par with the better sequels, for what it’s worth. The downside is that the actual kills can be rather limp and the director missed some ample opportunities when providing scares. For example, when Michael claims his first victim, I think it would’ve been more chilling for Michael’s mask to simply appear in the darkness…which would also work as a call-back to “Halloween” and “Halloween 2“, which had similar shots. Instead, it transitions into a predictable POV which spoils Michael’s presence without being especially creepy. When we finally see him emerge from the shadows, it cuts to another angle. This wasn’t the only time I felt this way either, as I found the attack on Jamie to be surprisingly uninspired- especially considering how it followed an intense chase sequence. So the build up is good, but the pay-offs are weak. The flashy editing of “Halloween 6: The Curse of Michael Myers” sometimes was appealing, but I prefer the simplicity of “Halloween 6: The Producer’s Cut“. I found this style to be less distracting, which helped the suspense breathe. I might be in the minority, but I preferred the cool, updated score of the theatrical version though because it helped give its movie a more memorable identity. By using the classic Halloween theme, “Halloween 6” doesn’t differentiate itself from “Halloween” and “Halloween 4” enough- sometimes even feeling like a lesser version of those. But the music in the theatrical version was something which stayed with me even after the story and thrills dissipated from my memory, so I prefer that apple over the orange. 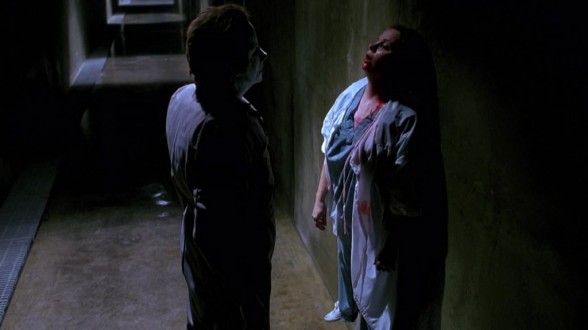 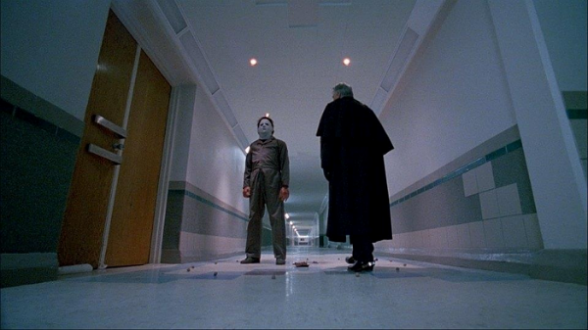 Nearly everyone agrees that “Halloween 6: The Producer’s Cut” made a LOT more sense than its…do I say predecessor or successor because the theatrical cut can be argued as both? The plot flows more smoothly and I didn’t find myself as confused. We learn the back-story involving the baby and while the motivations of the villains are vague, they aren’t so contradictory. Even eye brow raising moments such as the body being hanged in the tree could possibly be explained if you believe that the cult members did that. The problem is while I understood everything more clearly, that didn’t change the fact that we’re working with a pretty f@cking stupid storyline. I’ve already complained about how revealing Michael’s origins only diminishes the fear he inspires, but his origins are very difficult to take seriously. Even Jason and Freddy had better back-stories, which is a very frightening prospect! Everyone points out how the entire third act of the producer’s cut is comprised of totally different footage, but do you know what? The theatrical cut delivered a much better finale. I thought Michael’s attacks were much more intense and the ‘massacre’ scene was pretty cool. The Producer’s cut has an action-less third act involving the cultists looking goofy in those suits and Michael being stopped in the MOST RETARDED WAY IMAGINABLE. It seems oddly anti-climactic, tying into my complaint regarding the weak pay-offs. Nevertheless, there are some improvements surrounding the ending. The Producer’s cut makes better use of its characters as everyone has stronger roles within the overarching story- whereas before (or after), they didn’t need to be there. I was happy that Dr. Loomis (Donald Pleasence) and Dr. Wynn (Mitch Ryan) had more screen-time. The ending itself was superior, although this is one of those cases where ‘better’ should not be confused with ‘good’. While some of the imagery was haunting, Pleasence overacts while Ryan underacts. It raises more questions than it answers, but at least I wasn’t tearing at my scalp in unspeakable rage.

Strangely, I thought the acting was a little bit better in the theatrical cut. Everyone has off moments in this movie, where they are either too hammy or too wooden and I am sad to say that Pleasence could’ve used some restraint at times. His best scenes- which are very good- tended to be in the theatrical cut. Paul Rudd doesn’t make any funny faces, but he’s trying too hard to be bad-ass and…well, he’s Paul Rudd. In the theatrical cut, despite being socially awkward, I bought him more as just a normal guy. Marianne Hagan defies this complaint by standing out much more in the producer’s cut though. I really liked her and thought she gave the most consistent performance. Another topic: Jaimie’s fate is MUCH better for this version as it serves a purpose within the story while not being as mean spirited. “Halloween 6: The Producer’s Cut” might’ve been a lukewarm experience for me, but it never inspired the anger I felt whenever “Halloween 6: The Curse of Michael Myers” did something INFURIATING. If you were not a fan of the theatrical cut, I think you will definitely prefer this version as it is the more fleshed out movie- both in suspense and story. Even as someone who got a kick out of the theatrical cut, I do believe that it is technically the better version, even if I prefer various aspects of the theatrical cut.  But I do believe that the reputation of the producer’s cut will diminish once more people start checking it out. Part of its appeal is that it’s so rare. Those who watch it feel like they just had an exclusive experience, which makes the movie seem better than it is. But it’s definitely pretty good, even if it’s in danger of being incredibly overrated.

Violence: Rated R. Not as graphic as the theatrical cut, but it’s still pretty violent.

Nudity: Some breasts, a post-sex scene and an implied rape.

Overall: “Halloween 6: The Producer’s Cut” Vs “Halloween: The Curse of Michael Myers” is like comparing apples to oranges. The apple in this case is certainly fresher, but if you prefer the tanginess of the orange, the quality of the fruit isn’t going to matter as much.