“Halloween IV: The Return of Michael Myers” didn’t upstage the competition at the box office, but it was well received and financially successful enough to continue to saga of Michael Myers. Unfortunately, Moustapha Akkad was blinded by greed and demanded that the fifth entry be finished in time for the following Halloween, a decision he later admitted was a mistake. “Halloween 5” wasn’t just a critical and financial misfire, it damaged the brand enough that it might even be partially responsible for the troubled production of “Halloween 6“. I’ve always hated this movie, but learning about the behind-the-scenes problems helped me understand why it’s so boring. There was simply no time for the filmmakers to come up with any creative content, so they were forced to rely on the tactics of their predecessors. “Halloween 5” is devoid of inspiration or energy, most certainly because everyone was desperately trying to get it done in time for an unreasonable deadline. I don’t even think I’d call the director, cinematographer or editor incompetent considering these circumstances, but I…kind of wish they were? I would much rather be amused or angered than outright bored.

Every visual, from the camera angles to the lighting to the edits, are so dull, as if they were designed to evoke feelings of disinterest. There is absolutely no style and Dominique Othenin-Girard only draws attention to this by opening his movie with the much flashier footage from “Halloween 4“. There isn’t any suspense either for a variety of reasons, ranging from Michaels’ presence being prematurely telegraphed to an overuse of false scares to awkward staging. I guess the ventilation set piece was decent, but Othenin-Girards’ inability to build tension keeps it from reaching its full potential. When Michael sticks his head down the chute to find Jamie, accompanied by a scare chord, it would’ve been a good scare…if they hadn’t already included a prior shot of Michael noticing her- giving away what’s about to happen. The kills themselves are pretty weak, neither being gory or intense enough to satisfy the cravings of anyone. I was surprised at how anti-climactic they were, especially considering some of these deaths belong to important characters from the previous film. During the climax when Loomis is wailing on Michael with a wooden plank, it should be an intense and emotionally exhausting scene, but the awkward choreography, subpar editing, lack of good sound mixing and a surprisingly uninvolving performance from Donald Pleasence make it come across as silly and lame…and derivative of “Friday the 13th Part 4: The not-so Final Chapter“. Even the soundtrack fails to liven up these dull scenes, with the ominous cues and the scare chords feeling kind of tired at this point. Then again, the music is fighting an uphill battle, as it’s kind of difficult to unnerve your audience when the score is attached to shots of Michael flailing in the water or crawling away from a lost battle. The “Halloween” theme is iconic and arguably the best horror score of all time, but introducing it alongside images of Michael in positions of vulnerability only makes the music less frightening when it appears later on. I do want to thank the composer for adding those stupid, comical zingers whenever the bumbling cops showed up though, as I would’ve had no idea they were supposed to be funny…I would also like to tell the composer to go f@ck himself for those comical zingers, because they murdered the tone and were just…bad…I certainly was not laughing when I apparently was supposed to…although I was laughing when it seemed like Jamie was going to describe the ‘big’ breasts of the woman on the store logo. I also was amused when Michael Myers disguises himself as one of his victims…who is also named Michael. Sometimes the acting is pretty laughable too, whether it’s some of the absurd lines Donald Pleasence has to deliver (“COOKIE WOMAN!?“) or Danielle Harris’ over-the-top sign language. To her credit though, she invests herself in the role and the movie has no problem beating Jamie up. In my opinion, if the protagonist of your horror flick has to be a kid, they need to take some physical damage to sell the audience on the possibility that they might not survive. “Halloween 5” gets most wrong, but I respect it for putting its young heroine through the ringer. 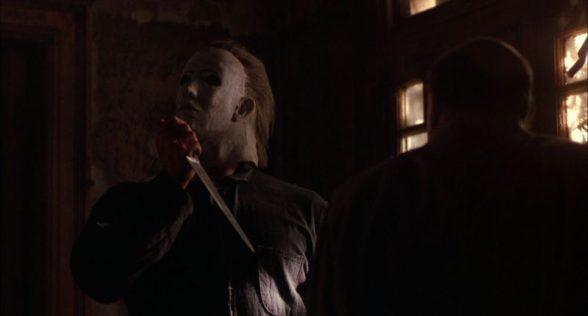 The script also likes to suck the life out of the movie and that is when it’s at its best…The plot is surprisingly confusing, possibly because not even the writers had any idea where they were going with the storyline…something that has been acknowledged in interviews. I don’t mind that they tell us nothing about ‘The Man in Black’, but I was often wondering about other characters’ motivations. I get that Michael is after Jamie and I could accept him targeting Rachael (Ellie Cornell), but why is he harassing Tina (Wendy Foxworth) and her friends? They aren’t getting in the way of his mission and most of them are blatant stock victims…f@cking annoying blatant stock victims…Why should I care when any of them die? Why should I care when they even might be in peril? Also, why did Michael (pretending to be another Michael) stop the car to let Tina go to the store? What was his plan? Why didn’t he just kill her? Yet paralleling Michael’s muddied motivations, did they ever clarify why Jamie seemed to be protecting him? They draw attention to this, only to never give us an answer. Even Dr. Loomis does some bizarre stuff, like stopping a deputy from calling for back-up…Why?! Every interaction is either unpleasant or annoying. Dr. Loomis has been unhinged for awhile, but he spends most of his screen-time yelling, ranting about the same ole shit and getting up in peoples’ personal space. It grew tiresome quickly. Some of the shots of him and Jamie together are uncomfortable for all the wrong reasons. Maybe the cinematographer couldn’t figure out how to include them both in the same shot without having him practically smother her, but either way, it was awkward. Yet while Loomis is at his most unlikable here, you hate everyone else for not heeding his warnings.

Tina is…f@cking cancer to this movie. For what it’s worth, I think Wendy Foxworth did a pretty good job in the role, but she’s written to be annoyingly bubbly…all…the f@cking…time! I completely turned on the character when…okay, I’m lying. I was against her from the beginning…but I turned on her character EVEN MORE when she starts making light of Michael Myers. I get that she feels Dr. Loomis has brainwashed Jamie, but wasn’t there just a murder spree a year ago, where neighbors and possibly her friends were killed at Michael’s hands? WASN’T HER BEST FRIEND AT THE CENTER OF THIS!? This insensitivity made her more of an asshole than her intentionally unlikable, asshole boyfriend, yet “Halloween 5” wants us to root for her. We’re supposed to find her charming and the filmmakers must’ve been enamored with her, because she’s practically the main character throughout a large portion of the film. Most of the script sidelines Loomis and Jamie, with Michael not bothering with either of them until later on, so Tina is the one at the focus of the action…Also, apparently Jamie’s relationship with Tina is more important than her relationship with Rachel, even though Rachel is her sister and their relationship WAS THE HEART OF THE ENTIRE LAST MOVIE!!! Ugh, there are some poorly thought out moments from a writing perspective, like how the cops plan a sting operation at Michael’s old…mansion? When did this happen??? Anyway…they apparently overlooked the room with all of those lit candles and dead bodies…Whoops? Anyway, “Halloween 5” is mostly just killing time until it reaches a subpar finale, so unless you enjoy rushed horror flicks which rely on annoying stock characters and false scares, stay away.

Nudity: There is some sex and nudity.

Overall: “Halloween 5: The Revenge of Michael Myers” is boring and in my opinion, deserves the mantle of ‘Worst of the Franchise’.