HALLOWEEN: THE CURSE OF MICHAEL MYERS (1995) 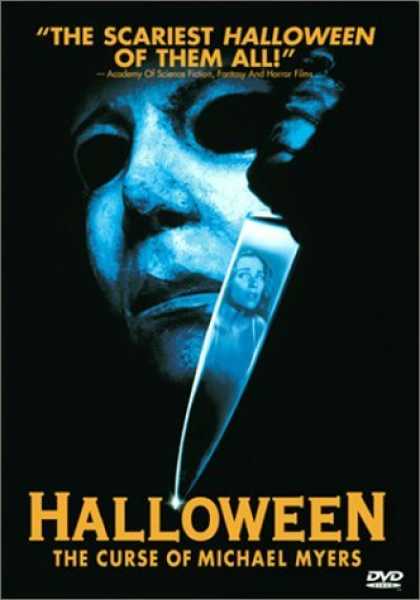 The last time we saw Michael Myers in “Halloween 5”, he had escaped from the authorities with the assistance of the mysterious Man in Black, most of Jamie’s allies were dead and I was tearing at whatever hair I had left in boredom. God, I hated that movie. Apparently most viewers tended to agree with me, even if they weren’t as vehement as I was. It wasn’t very well received- financially or critically- so producing a “Halloween 6” would be riskier. What followed was one of the most notorious behind-the-scenes travesties ever to haunt a horror film. The producers, writer, director and even the actors all drew kitchen knives of their own and began stabbing each-other. In the end, the only real victim was the movie itself. Yet I look at “Halloween 6” with some fondness. While burdened with plot holes, filler and one of the worst endings of all time, it is still a reasonably entertaining slasher that tried something new.

When it comes to horror films, there are usually two opposing sides that fight for the attention of the viewer. Generally, a slasher fan will embrace the carnage, while detractors will glare at the (usually shoddy) script or production values. I enjoyed “Halloween 6″ because I appreciated its strengths more than I frown upon its weaknesses, although those are hard to ignore. The first thing you should know about this sequel is that it is incredibly mean spirited. It opens with the death of Jamie Lloyd, the protagonist of the previous two entries. This is bad enough, as the fans liked her and she has already gone through a lot. What makes her demise worse is that she’s impaled by farming equipment. Ouch! But if this wasn’t bad enough, Michael proceeds to push her deeper into the blades after a psych-out hug. Yet because that’s still not  on the level of cruelty they’re aiming for, they can’t just let her die then. He has to TURN THE MACHINE ON, so her final moments are in excruciating pain. That’s pretty depressing and I haven’t even brought up her implied rape. Harsh! While the film never comes close to topping that, it makes sure that all of its victims- and there are a lot of them- die in demented and brutal ways. Sometimes the kills are pretty absurd, such as when a dude’s head explodes during electrocution. But they’re always cringe inducing thanks to the spectacular gore effects.  Even the more mundane deaths, such as neck snapping, end up being grotesque. Many will be put off by the mean spirited tone and I can see why. Didn’t I dislike Rob Zombie’s “Halloween II” for being too dark? Maybe I don’t mind because it was placed between “Halloween 5” and “Halloween H20“, two movies with no bite? The brutality present in “Halloween 6” gave the suspense an edge, because I knew each attack would leave me wincing. Plus, Rob’s film might’ve been dark, but it’s hard not to be when the lighting is so dim. So I’m not sure if that really counts.

Joe Chappelle’s direction is often referred too as ‘poor’, but I disagree. It’s different and I’m lead to believe that Halloween fans don’t like ‘different’. I mean, people still bitch about Michael’s absence in “Halloween III“, even though there are plenty of other shitty Michael Myers movies that have since been released. With that said, Chappelle probably is primarily responsible for the scripts deterioration. So he does deserve some of the failure. “Halloween 6” has a more flashy style. The blue tints, strobe lights and hyperactive editing are at least unique when compared to the previous films. To complete the transition, the score is completely altered, sounding more electric. It’s not as iconic as Carpenter’s original tune, but I still thought it had an appeal. Once again, fans of the previous films might consider this a betrayal to the original. But after the bland “Halloween 5“, the franchise needed to start experimenting with other ways of delivering fear. Had “Halloween 6” been made at any other time, it’s possible I would’ve agreed with the detractors. Nevertheless, some old school chills do sneak its way into the feature. Characters will be having a conversation and we’ll see Michael peering at them through the window. I wouldn’t call “Halloween 6” scary, but it had moments where it got under my skin. Moments…The acting is okay. It’s hard watching Donald Pleasence (Dr. Loomis) knowing that this was to be his last movie before his death. He looks frail and sickly, but seems to be giving it his all. There is a warmth to his performance, that was lacking in his previous portrayal of Dr. Loomis. His chemistry with Mitch Ryan (Wynn) was a lot of fun and I wish both had more screen-time. It’s strange seeing Paul Rudd (Tommy) in a horror movie. He does fine at first, but his comedic side begins to dominate his later scenes. Just look at his goofy facial expressions when he confronts Michael for the first time. Everyone else does…eh. This franchise has never been renown for its acting amongst the supporting cast. Some do good, some do bad and everyone else is in the middle.

So I paid more attention to the spectacle, while the detractors concentrate on the flimsy screen-play. Apparently Daniel Farrands had a very ambitious script that won the hearts of Pleasence and the producer. Was his original vision a masterpiece? I’m not sure. Personally, I disagree with the direction he wanted to take the franchise. I always felt Michael was at his creepiest when his motivations were abstract and his origins were unknown. How can he survive being shot, stabbed and knocked from high places? Who cares! Explaining it is only going to cheapen the thrills, a trend that began with the second movie. But despite this misdirection, the revisions and reshoots only served to make the whole concept more confusing. I’d hope that Farrands original screenplay tied everything together more effectively, because the final cut is painfully disjointed. Half of the cast is irrelevant. They’re only there to give Michael more victims, but couldn’t they have made it less fillery? The narrative is supposed to be focus on Michael hunting for the baby, yet so much time is dedicated to him hunting the Strode’s. There is barely even a reaction to their deaths. What about the radio host? Why was that necessary? Or hell, there’s this subplot involving some kid who is having violent dreams. They’re setting him up as the next Michael Myers, but this storyline is never resolved. The whole cult aspect was sort of interesting, but their motivations are vague and one characters fate is left unresolved (the Man in Black). The original script was clearly too complex to cut down without careful consideration, so there are large gaps in the story that make no sense. This leads to an ending that made me angry. It doesn’t end, it just stops. We hear what we presume is the death of Dr. Loomis, which is ironically followed by the “In memory of Donald Pleasence” caption. I think that might be crueler than Jamie’s fate.

When I said that everyone picked up kitchen knives and went at each-other in the opening paragraph, I was being pretty serious. Everyone blames everyone else for the failure of “Halloween 6“. Danielle Farrands had a script that was apparently very good, but it is possible we are presuming a bit too much. I don’t know what Chappelle retained from his re-writes, but I dislike the whole origins story in general. If Farrands was responsible for some of the shit present in the Producers cut, I’d be a little worried. Michael being stopped by stones and is a puppet for some cult? Lame. But I imagine the story would’ve been far more coherent than the theatrical version. Chappelle removed the plot for the sake of mayhem, suggesting he wanted a bolder slasher. I am forced to choose between a superior cut that makes more sense or an inferior version that appeals more to my tastes. But the producers had ideas of their own, so even Chappelle didn’t have control. In the end, the producers, writer, directors and actors disagreed on the content and how it should be executed. This has been an issue that has plagued the series since “Halloween 2“, when Carpenter and Rosenthal clashed in regards to the level of violence. It is the franchise’s “curse”. Yet what Farrands, Chappelle, Akkad and everyone else had forgotten is that a movie is never made by a single person. It is not the script, direction, acting or cinematography that determines whether a film is a success. It is all of the above. It is when every aspect of film-making has chemistry with every other aspect, working in unison. It’s when the script boosts the direction, which in turn gives the story life. “Halloween 6” struggles because everyones ego created a rift in the quality. Luckily, at the forefront, “Halloween: The Curse of Michael Myers” is a pretty hardcore slasher and I will enjoy it as such.

Note: Couldn’t think of a place to put this, but Michael had some mad teleportation skills, rivaling Jason in “Friday the 13th Part 8“. Also, my favorite scene had to be when the little girl is dancing in blood. It’s just so weird and surreal.

Violence: Rated R. Michael has never been this psychotic.

Overall: “Halloween: The Curse of Michael Myers” is my 4th favorite entry in the franchise, but it’s not for everyone.