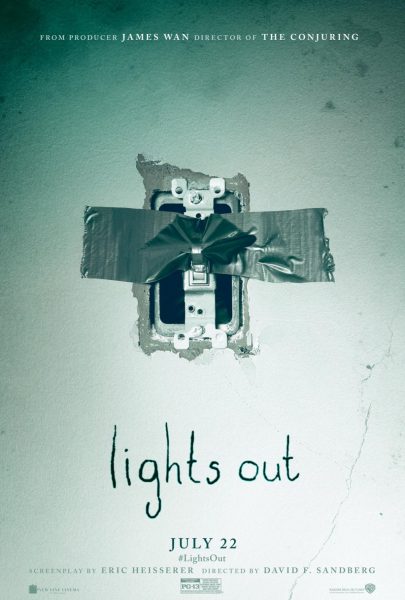 Plot: Rebecca (Teresa Palmer) is reluctantly dragged back into her dysfunctional family when her younger half-brother (Gabriel Bateman) starts witnessing their Mother (Maria Bello) talking to herself. It turns out that she’s really conversing with a malicious entity that lurks in the darkness, incapable of existing in the light, who will kill anyone who gets in the way of it and their Mother.

If there was ever a horror movie that could be called the cinematic equivalent of fast food, “Lights Out” would be a fat, juicy cheeseburger. You savor every delicious morsel as you consume it, but afterwards you’re self conscious about what you just allowed into your body. David F. Sandberg entered perilous territory when he decided to expand his short film (“Lights Out“) into a full length feature of the same name, as the gimmick didn’t seem to have a lot of room for exploration. Yet to his credit, he crafted a fun little frightfest which goes by so quickly that your mind almost doesn’t process the experience. Is that a criticism or a praise? I guess that depends on your viewpoint. On one hand, the marriage of a short runningtime (81 minutes) and fast pacing means that “Lights Out” likely won’t bore you. This will certainly appeal to younger audiences, who might be too impatient for any kind of slow burn build up. On the other hand, “Lights Out” is too short for any kind of moodiness or unease to really sink in, meaning that none of the scares will be able to haunt you after you’ve left the theater. Financial gain aside- I highly doubt this will leave an impact on the genre or general audiences, because it only strives for short term chills. Despite the critical acclaim, “Lights Out” is cut from the same cloth as the likes of “The Possession“, “Annabelle“, “The Woman in Black 2” and other ‘low brow’ horror flicks that prefer utilizing jump scares over atmosphere or suspense. But is this a bad thing when “Lights Out” is so much better than they are?

“Lights Out” boasts a spooky ghost, which provides lots of creepy imagery whenever we see its silhouette waiting in the darkness. The lighting and cinematography are excellent, showing us just enough without obscuring our vision too much. I liked the glowing eyes and how the visuals were designed to draw attention to them, as they are arguably the scariest part about the specter. The sound design is over-the-top, maybe even campy, but it was fun and enhanced the style that “Lights Out” had embraced. There are two different kinds of horror films and there is a misconception that one is inherently superior to the other, even though it’s more about the intended impact. The first is usually soaked in dread, focusing on unsettling or upsetting its viewers as much as possible, ideally haunting them even after the ending credits have finished- with some recent examples being “It Follows“and “The VVitch“. The second is more about entertaining audiences, eliciting shrieks followed by laughter, or simply just being a fun kind of scary- with some examples being “The Conjuring” (and its sequel) and “The Shallows“. I believe “Lights Out” was firmly hanging out with the latter, as the scares simultaneously made me jolt and giggle and I don’t think there is anything wrong with that (it’s fun!) as long as it’s intentional. Considering that the film always maintained a sense of humor about itself (the headlights bit was amusing), I firmly believe this was the point. Yes, there are a lot of jumps and I’m aware that there is a stigma surrounding jump scares, even though most viewers don’t seem to know why. What makes this a better example than the majority of its brethren is-

-There is a solid balance of jump scares and spooky imagery, so at least there were two different kinds of scare tactics.

– The attacks often come from different directions, sometimes from the front, back, above and beneath, so they don’t feel as telegraphed and can catch you off guard.

The problem with jump scares is your mind adjusts to what the film is doing, so they gradually lose their bite as you get used to them, but “Lights Out” has enough variety to keep itself from becoming stale. In essence- this is a ‘jump scare’ flick done right! “Lights Out” also benefits from a strong cast, who succeed in making their characters likable. The writer even avoids some of the stereotypes which plague these characterizations. Rebecca (Teresa Palmer) is the type of character who would usually be whining about everything and being annoyingly hostile, but while she certainly has her personality flaws, she spends most of her time being concerned for her little brother. Speaking of whom, how in the hell did Martin (Gabriel Bateman) manage to go through the entire movie without getting on my nerves? He’s such a good kid that it’s…actually kind of phony, but I will pay that price! Horror adores the ‘bitchy rebellious sister and her obnoxious little sibling’ dynamic, so thank God “Lights Out” made their interactions sweet and charming. Sophie (Maria Bello) might be unhinged, but at no point did I ever feel that she was a danger to her children (a common cliche in this genre), even though this arguably diminished some of the tension. I didn’t want these people to die, so from that alone, “Lights Out” struck a gold mine in keeping me invested. 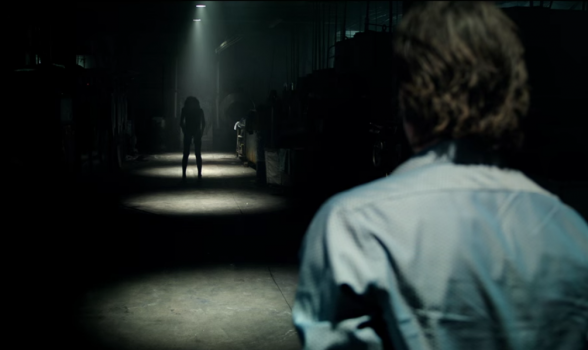 But there is a more cynical interpretation of “Lights Out“, which does contain at least some validity, in that it’s a dumbed down compilation of superior movies. It’s common to see a ghost story which forms a relationship between the supernatural and mental illness, whether it’s intended to be metaphorical or part of a mystery. “Lights Out” seems to want to explore such a concept, but it’s very half-assed in doing so. Even though characters ask themselves if they are crazy, it’s never presented as an actual possibility. We know that the ghost can’t be a hallucination or the Mother suffering from an identity disorder because independent characters can see it in the very first scene. Even the motivation of the entity seems easy to deduce early on, so we can’t ask ourselves if she represents the mothers’ repressed hatred or anything like that. I have a feeling that the writer probably just saw “The Babadook“, liked it and decided to incorporate that template into “Lights Out“, without understanding why it worked to begin with. The exposition and thematic material surrounding the family unit were all so blunt that it really seems like the filmmakers just wanted to get the story out of the way, so they can get to the scary stuff. But at least there was a lot of inspiration to be found within the films scarier moments, so I chose to give the film an optimistic outlook. There is no substance and the story lacks any kind of weight, but the film offered enough thrills and chills to keep me entertained. There are some other problems, like the characters tendencies to split up during the finale and how come no one questioned the gruesome death of their (Step)Father (Billy Burke in a cameo), but it’s too short for any of these flaws to really resonate, although it’s also too short for anything else to resonate as well. I feel like this should’ve been a J-horror production, as I think the filmmakers would’ve been more patient, focusing on creepy background imagery and mood until building up to a terrifying finale. I believe this COULD have been a lot more memorable and effective, but I still enjoyed what I got anyway. I do like myself a tasty cheeseburger, after all, even if every bite makes me feel a little bit fatter.

Violence: PG-13, the opening scene was pretty gruesome though.

Nudity: None, although sex is talked about.

Overall: “Lights Out” is a solid rental, as nothing about it really stands out, even though it provides 81 minutes of entertainment. If you see it in the theaters, I would recommend you check it out with friends, as this is the ‘fun’ kind of horror intended to be enjoyed with a crowd.