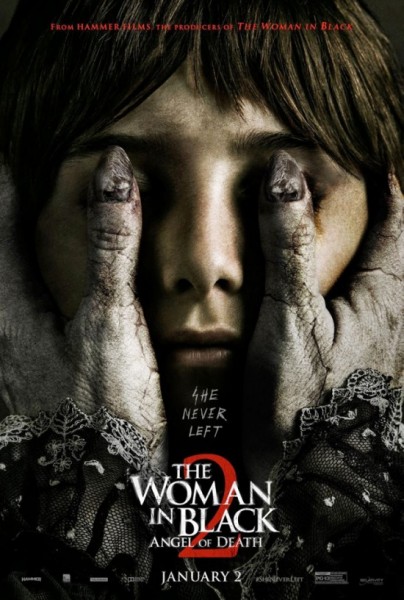 Plot: Eve Parkins (Phoebe Fox) and Jean Hogg (Helen McCrory) evacuate a group of children from London when World War 2 starts and plans on spending the duration of the war at the Eel Marsh House…which is still haunted by the Woman in Black.

I thought “The Woman in Black” was a good fright fest that I almost feel deserves to be called great, except I keep forgetting that its existence. I can’t seem to push shit like “The Possession” out of my memory, but the one that does deserve to make its home in my mind always seems to be lurking outside the front door. Beyond simply being a well crafted gothic horror piece, it boasted an amazing location, spooky atmosphere and unconventional scares that did get under my skin. When I put my mind to it, I can recall the majority of the content, so it’s too bad that I often forget to put my mind to it. Yet when I learned that a sequel was finally being made, I shrugged indifferently. Good or not, “The Woman in Black” was not franchise material. We learned everything there was to learn about the spectre in the first movie, so what else can be explored? Are they just going to recycle the events of its predecessor? “The Woman in Black 2: Angel of Death” wasn’t a good idea to begin with and the final product confirmed my initial suspicions. It’s thinner in story, scares and even the originally impressive Marsh no longer seems very impressive.

I always hate it when sequels will have characters trying to solve a mystery that was already completed in the previous film, as it means relying on regurgitated material. We know the origins and motivations of the woman in black already, so when the first half of the feature is dedicated to exploring this, that means I’m going to be kind of bored. When the characters wise up and decide to flee the Marsh, we know that they aren’t safe because the titular villain had no limitations where she could go in the previous movie. We know that nothing will satisfy the woman, so it’s hard to breath a sigh of relief when the characters think that she’ll finally leave them alone during the ending. They literally revealed nothing new about the character and the attempts at trying something different felt accidental. Eve has a dark secret that the woman in black apparently knows…somehow…and she’s tormenting our heroine for it. Or is she? If the Woman in black is a telepathic, this raises the question of whether her sons death was really an accident. She might have a legit reason to hate her sister. But that idea is never explored. I honestly interpreted this as Eve potentially going insane, as the woman doesn’t harass her anymore than she did the previous protagonist and Eve was acting pretty damn cazy. But Eve seems to think that then woman is specifically targeting her, even though that idea is never followed through with and Eve’s apparent madness never goes anywhere. Were these potential storythreads figments of the imagination or was I supposed to consider them? I don’t know, but “The Woman in Black 2” doesn’t do anything with them, so it doesn’t matter. There is very little plot, other than coasting off of material that originated from “The Woman in Black“.

The acting bothered me too, although this is a tricky thing to discuss as I didn’t think the actors themselves were terrible. Everyone mostly does fine, but they tend to oversell various facets of their personalities. Phoebe Fox just seems too angelic to be believable and when she emotes despair, I thought she was very over-the-top. Jeremy Irvine is fine and even shows traces of charisma, but when he is being distressed, he’s a bit heavy with the tears and mannerisms. Helen McCrory probably gives the most consistent performance, but when she starts to lose it near the end, her fear seemed unnatural. But I blame the character writing- and possibly the direction- because the dialogue was pretty awkward. Characters will spout off exposition tying into the various themes and it’s too on-the-nose. Who says “This room…it feels sad.“? Or who responds with “Rooms aren’t sad, people are.“. The cheesy lines like “What lies beyond that smile?” make the characters feel like they belong in a soap opera. Then you have the horror cliches, such as Eve acting all crazy when she’s trying to claim that someone else might be on the island- which is why I thought she was potentially going insane, but it probably was just lazy horror writing. Naturally, the listener will respond with “Keep your visions to yourself“. Wasn’t she talking to a doctor? Is that how they’d respond? Why is it so hard to believe that some homeless person might’ve wandered onto the property? CHECK and then dismiss her claims as hallucinations. We also must deal with the cliches of evil children who bully orphans. You’ll know who the first to die will be based on that alone. “The Woman in Black 2” at least tries to get us to care about the characters by throwing LOTS of back-story, but it was executed in such a heavy handed way that I just rolled my eyes.

But what about the scares? The atmosphere? The suspense? “The Woman in Black 2” is 90% jump scare in content. The ‘hanging’ jump scare did admittedly startle me, although I can’t help but feel it was breaking the fourth wall as no one in the movie noticed it. The ending jolt wasn’t bad either. But how many boo scares or scary faces suddenly appearing can you take within a single film before it gets old? Everyone is sick of jump scares anyway, so that shouldn’t be your anchor. The scare tactics are so pedestrian that I’m convinced that the director doesn’t really know how ‘horror’ works. There is this one scene where a character hears creepy noises, so starts to investigate. The build up is okay, but you think it’s leading to something terrifying when then source of the noise is revealed to be coming from…a rocking chair. That was really f@cking lame. “The Woman in Black” had awesome bits like where the boy rose from the Marsh and starts pounding on the door. “The Woman in Black 2” has…a scary face suddenly popping into frame. That’s it. The director does such an inept job at utilizing the location that I wasn’t entirely sure if they were filming at the same place. What happened to those awesome wide shots of the marsh? Or the mansion? There are too many medium shots and everything looks so bland in comparison. The house has dilapidated within the past forty years, which should make it creepier, but this just means it resembles every ‘scary’ haunted house to appear in every movie ever. In the first film, it had a unique look which made it both gorgeous and spooky. Now it looks bland and even the marsh has lost its sense of awe. Gone is the feeling of isolation, when characters would be trapped in the house thanks to the tide. While said tide is mentioned, it never comes into play. In the first film, the fog, brilliant cinematography and perfect lighting gave the location a haunting aura that has stayed with me. Now there isn’t any fog, everything is darkly lit to where it becomes hard to make out the details and the cinematography was standard. There was nothing to differentiate these aesthetics from every other horror film being released these days. The ending sucked too and raised a potential continuity error. In the ending of its predecessor, there was a lot more mud and it didn’t seem very deep. Now it’s pure water and seems to be a lot deeper. Sometimes. It’s inconsistent as characters will be able to stand when the camera is filming from outside, but once they’re pulled under it’s suddenly a bottomless pit. Speaking of inconsistent, when characters are exploring the village, it appears to be night. But back at the house, the lighting suggests that it’s day. Whoops. 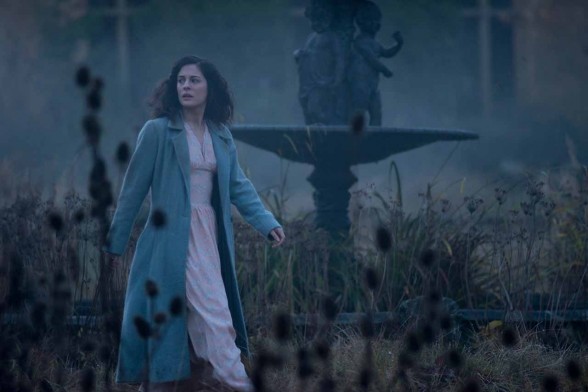 “The Woman in Black 2” is bad, but the funny thing is that I was so emotionally divorced from it that I never got angry. I was never frustrated, annoyed and the short running time didn’t make my viewing experience a chore.- even if I wasn’t enjoying myself “Annabelle” was around the same level in terms of quality, perhaps even a little better as it has two good scenes within that ocean of tedium, but “The Woman in Black 2” didn’t piss me off like that one did. Why? I think the difference is that “Annabelle” was a soulless product that felt like it was generated by a cliche producing machine. “The Woman in Black 2“, for all of its suckitude, does feel like actual people were developing it. The writer did try to connect with the audience by fleshing out its characters, even if the attempts ultimately did not work. I sincerely believe that the writer and director simply do not understand how the horror genre works and probably would be more comfortable with drama, especially of the soap opera variety. Or maybe Hammer Studios is panicking since none of their movies are making money and chose to quickly churn out a sequel to their only real hit (since their revival), focusing more on meeting the deadline than quality. “The Woman in Black 2” fails on too many levels to be worth watching and there’s nothing concretely positive I can say about it, but this project was a bad idea to begin with. When you combine a bad idea with the desire for a quick buck and inexperienced filmmakers who might be out of their element, failure will be the only result. I’m disappointed with Hammer Studios, but I felt nothing- positive or negative- towards the movie.

Violence: PG-13. Some disturbing content, considering it deals with the supernatural murders of children.

Overall: “The Woman in Black 2” is a bad movie, so why bother with an unsatisfying experience? Watch the first one instead.