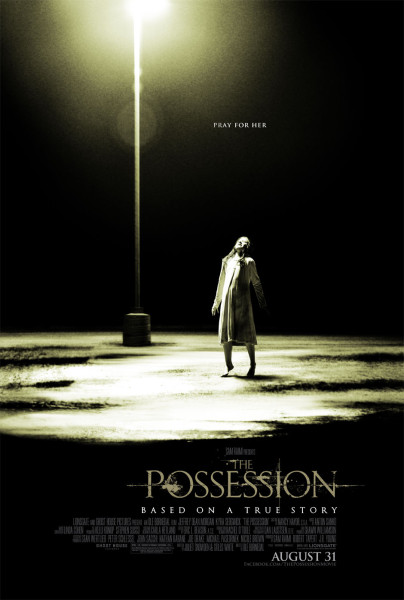 Plot: While a family is facing various tensions due to Clyde (Jeffrey Dean Morgan) and Stephanie (Kyra Sedgwick) recently being divorced, they must band together when it becomes apparent that the youngest daughter, Em (Natasha Calis), is being possessed by an evil Jewish box…But by band together, I mean yell at each-other a lot…

If you have not had the…pleasure…of viewing “The Possession”, don’t fret. If you’ve seen “Mama”, “Dark Mirror”, “Mirrors”, “The Orphanage”, “Poltergeist” (or its sequels), “Dark Skies”, “Insidious” (or its sequel), “Sinister”, “A Haunting in Connecticut”, “Don’t be Afraid of the Dark” or any of the “Paranormal Activity” movies…you’ve seen “The Possession”, a film so derivative and uninspired that even its gimmick- which is supposed to be what separates it from the pack- has been done before. Yeah, the whole idea of a Jewish possession/exorcism story might sound unique when you say it aloud, but then you’ll likely remember that “The Unborn” did it first…So add that one to the above list, although to be fair, the only people who probably remember “The Unborn” were the ones who produced it. Words cannot describe how much I hated “The Possession”…even though I am technically describing how much I hated “The Possession” using words…Shut up. I’m so tired of this possession/haunting formula, which has been used so much that I almost feel they should start referring to these films as remakes. It’s not objectively terrible, but it’s boring because it’s so familiar and it’s annoying because it follows some of the most obnoxious characters in the history of the genre.

Ugh, why do I even need to write a review? If you’ve read my reviews of any of the above films, I’m just going to be repeating myself…meaning, I’m just as unoriginal as this f@cking movie! F@CK! As always, a kid starts a connection with a ghost, referring to them as an imaginary friend. As always, the kids really like to bitch at their parents. As always, one parent begins to suspect the supernatural while the other is in denial- oooh, you’re so daring “The Possession” by gender flipping the norm. As always, the family must band together in order to repel this menace. As always, any third wheel (boyfriend of divorcee) is ‘removed’ from the equation and we’re supposed to dislike them because they’re the third wheel. As always, people yell at eachother a lot. As always, there is some sort of economical issue, whether the family is broke or have been offered the position of a lifetime. This subplot just stops around the half way point though. As always, there is someone who knows about the demonic entity so they can deliver exposition. I will admit that the blatant self parody of this scene was kind of amusing. As always, the hauntings get mistaken for child abuse. As always, there are boo scares and “The Possession” is especially fond of using animals to accomplish this. As always, there is nothing new. They might as well just be using the same script of past possession films. Come on writers, you guys did “Knowing” and while that wasn’t great, at least it was different.

But its unoriginality merely explains why I dislike it, why I LOATHE it can be traced to the characters. I hated pretty much everyone. The kids are bratty, always complaining and bitching about this and that. They’re hostile towards their Father for some reason, but seem cool to their Mother, even though I didn’t understand why everyone kept saying the Dad destroyed their Family. It’s never explained, so it just made everyone else thoroughly unpleasant while you have to presume the Dad is unpleasant too based on how they treat him. But the worst offender has to be Stephanie, the true villain of the picture. She’s so smug, demanding and everything she says just seems to vile. I wanted to smack the bitch when she calls the Father oblivious because at that point, SHE is the one who is oblivious. He’s noticed his daughters emotional problems’, but when he tries to bring it up, she dismisses him and CALLS HIM FUCKING OBLIVIOUS! I hated her so much that one of my favorite scenes is when she’s walking through glass. SUFFER, BITCH! SUFFER! The boyfriend thing makes it worse, as she acknowledges how the divorce is effecting her kids, but lets this guy move in even though all of this has barely happened? Were we supposed to hate the boyfriend? The father seemed unreasonably hostile towards him and he has only one jerkish moment, which is directed at the daughter who is acting like a bitch herself (due to being possessed). Then when he’s non-fatally victimized, the mother apparently forgets about him. I can’t stress enough how awkward and unpleasant EVERY interaction is. It’s also redundant because at first, the kids and the Dad will get along fine until someone says something and a fight breaks out. Every scene within the first half is like this. Getting along, something stupid is said, now everyone is angry. Oi, I’ve grown to dislike downer endings because they’ve become too cliché, but I was praying for one to happen because with this family- a happy ending will be my downer ending.

While some reviewers conceded that “The Possession” was creepy and had some scary moments, none of them really worked on me. They often cut away during the more visceral parts, presumably so it cold have a PG-13 rating, which diminished the tension. The standout scares were more unintentionally funny than scary (the fingers coming out of the throat, the kitchen bit). While I did like some of the music chords and the director does set up a few spooky shots, most of the suspense or jolts fell flat for me. With that said, I will concede that “The Possession” was competently made and the acting was strong. Jeffrey Dean Morgan looks like Javier Bardem crossed with Robert Downy Jr, which I think overshadows his talent, but he is a skilled actor and I’ve always liked him in his movies- which just happen to usually suck. “The Possession” isn’t the worst of its ilk on a technical level, but I disliked the characters too much to make a connection and I’ve seen this story told before. Annoying+boring= Very unhappy time for MartialHorror. “The Possession” is about as creative as its title, which should’ve been changed to “A Possession“, because it’s just another possession movie.

Overall: If you want to see more of the same shit produced from this exhausted trend, give “The Possession” a look. If you’re indifferent or are like me (hostile) regarding this subgenre of horror, avoid. You might not feel my vehemence against the feature, but you’re unlikely to get anything out of it either.