(Written by Chad and Carey Hayes) 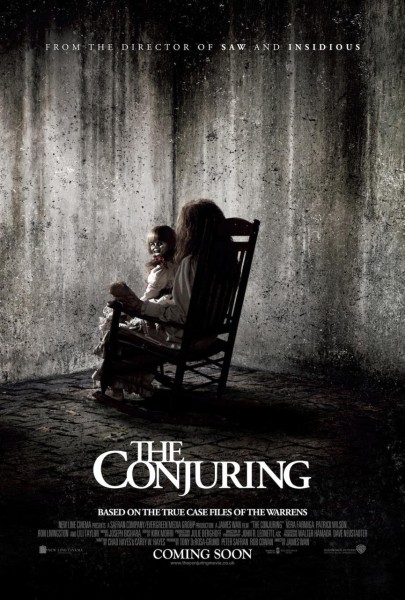 Plot: A pair of paranormal investigators (Patrick Wilson and Vera Farmiga) investigate the haunting of a large family.

“The Conjuring” made me giddy, excited, scared and caused me to yell “Bring me my brown pants!”, much to the consternation of my fellow viewers. When I reviewed “Mama”, I was pretty depressed because monotony is the death of horror. I’m so sick of these post-“Paranormal Activity” scare flicks recycling the same story, the same characters and the same kinds of thrills. Enter James Wan, who is known primarily for “Saw“, which spawned the ‘now dead’ torture porn subgenre. He had already helmed “Insidious”, another paranormal flick, so why continue to roll around in this overcrowded trend? That’s because he wanted to give us “The Conjuring”, which doesn’t rely on overused clichés and managed to freak me out. This isn’t just the best horror flick of 2013 (so far), it might be the best movie of the Summer. “Man of Steel”, “Iron Man 3”, “Pacific Rim” and all of you other blockbusters? You should be ashamed of yourselves.

Even though I wouldn’t call “The Conjuring” original, it’s pretty creative with how its toys with conventions and twists the formula. At its core, you have a family who moves into a new home and is then haunted by a demon. You have the youngest child apparently being possessed, the eldest being a hostile brat due to the move and the parents being rather poor. But the movie doesn’t linger on all of this for very long, because it prefers spending time with the paranormal investigators. Besides speeding up the pace, it creates a nice balance so the usual clichés don’t have time to wrap their claws around our throats before it cuts to a different perspective. I also like how quickly everyone realizes that they aren’t ‘alone’. At first, they dismiss certain things as having a rational explanation, but that’s only because those incidents are so minor. Once the demon becomes ambitious, they immediately acknowledge that they are being haunted. Speaking of playing with clichés though, there is a funny moment where the door slowly opens. The characters, music, etc suggests something scary is about to happen…but the reason for the door opening has a more amusing explanation. I also thought the characters were well written and their dilemmas made me care for them that much more. The actors deserve credit for bringing a sense of warmth to them too.

Whereas “Insidious” was very flashy in its presentation of horror, “The Conjuring” is more akin to “Paranormal Activity” in that it’s very subtle. But before you detractors start groaning, that’s not all it is. I assure you the extent of the scares Is not a door slamming shut. The cinematography, the lighting, editing and sound all work in unison to create an epic feeling of dread. You see, “The Conjuring” might be nearly two hours long, but it moves incredibly quickly compared to the majority of these kinds of films. The little stuff maybe takes up 30 minutes or so. The rest of the movie deals with haunting imagery, intense encounters and edgy suspense. There aren’t many jump scares, but there are many moments where I jumped because of how Wan staged and framed the scene. Yet I also liked how the tone wasn’t overly grim. It balances horror with a natural sense of humor, but not to the extent where it becomes a horror-comedy. It just happens to have a handful of funny moments. It also has some warm and uplifting scenes, which emphasize what is on the line for these people.

Violence: Rated R, but its not very violent.

Nudity: None, just the occasional talk of sex.

Overall: “The Conjuring” was Rated-R for being too scary. That is the greatest compliment a horror flick can get and it deserves that.