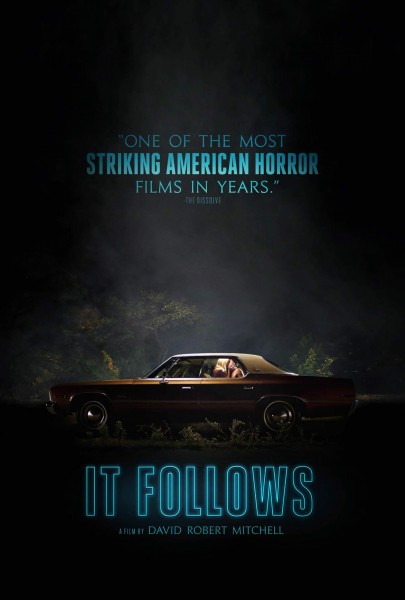 Plot: Jay (Maika Monroe) is a normal girl who has sex with her mysterious, new boyfriend- who totally ruins the mood by informing her that he passed a curse on to her. Now she will be hunted by a relentless demon who can take any form- stranger, friend or even monster. Her only salvation is giving the curse to someone else through sex.

“It Follows“…frightened me…It- and I mean the movie, not the creature which is often referred to as ‘it’- sunk its claws so deep in me that when I went home…alone…at night…I was flinching at every single little noise that came through my walls. I even started to look over my shoulder, almost as if I was convinced that It- and I mean the creature, not the movie this time- was about to sink its claws into me. In my eyes, that is the mark of a great horror film, but I am somewhat reluctant to sing such praises as I fear I’m setting up inevitable ‘hype backlash’. There are aspects that can be derided as flaws and many might consider the walking speed of ‘It’ to practically be a metaphor for the films pacing: SLOW. There are only a few majorly frightening moments, with the rest being about building up to said moments. I can see many viewers rejecting this flick for these reasons, especially considering all the circle jerking surrounding it. Yet I love “It Follows” for its individuality, as it has a unique story, visual style and even the character writing and scare tactics were somewhat unconventional. But above everything, I thought it was pretty damn scary!

So…where shall I begin?

I found the mythos and mystery surrounding the character of ‘It’ to be fascinating. I’ve heard complaints about how the boyfriend seems to know way too much, considering he got cursed through a one night stand, but that’s part of the ambiguity. As the demon does seem to enjoy toying with its prey, it’s possible that it did explain the rules to the original victim as part of a game. As it does occasionally break its own rules, I have to presume that they’re only present for sporting reasons. Without spoiling anything, I’ll explain the basic gimmick. ‘It’ can only briskly walk, apparently not being able to run, drive or fly, but it never stops for even a piss break. It can take the form of a loved one, a complete stranger, or something that’s not even human. Those who are cursed can see it, but no one else can. The beast can be wounded, but it will quickly regenerate and apparently cannot die. If you have sex with ‘the cursed’, you are now its primary target and must pass the curse to someone else- also using sex. However, if they are killed, then the demon will resume stalking you until it has presumably returned to the beginning. Once again, I like how different and unusual this concept is. The idea alone will have you keeping an eye in the background for any wanderers and never knowing what bizarre appearance ‘it’ will take on next only adds to the suspense.

Yet this story also provides lots of room for character development, as the protagonists are faced with an incredible moral dilemma. If they pass it along, they are practically ruining other peoples lives- if not outright killing them- and if they don’t, they’re likely dooming themselves as well as their predecessors. Either way, you and others will suffer regardless of your decision- and that sucks. The characters are all very endearing, resembling real people without feeling too generic. They all have their quirks that give them fresh personalities, but by the end of the movie, they have obviously. It’s rather depressing seeing their hopes, ideals and innocence replaced with terror, paranoia and callousness- but with the same ‘quirks’ intact just you remind you that these are the same characters. The ‘boat scene’ has drawn a lot of criticism for seemingly being pointless, but I understood what the director was going for. Did Jay, in a moment of weakness, pass the curse without taking any kind of responsibility for it? The film never confirms or denies and leaves it to the viewers interpretation. I personally think she backed out before going that far, but who knows? The possibility alone is unsettling. The actors do a great job at selling their emotional turmoil and I did not want to see these characters get hurt…especially as the implications for ‘how’ they will die are TERRIFYING. 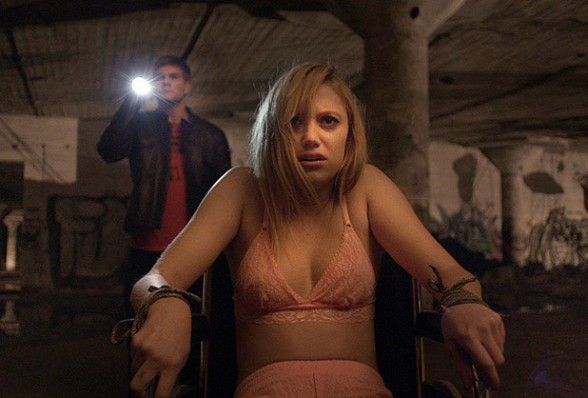 The opening ‘kill’ is pretty gory, enough to trick some viewers into thinking that the film is more violent than it really is. We don’t see it occur, but the aftermath makes the event scarier because so much is left to the imagination. What in the unholy hell could’ve caused…that!? When we actually do see ‘something’ later on, the opening kill somehow manages to become even MORE disturbing- even though it was already pretty f@cked up. The director uses sound design and a heavy hitting score to warn the audience that something might be happening soon, pulling us to the edge of our seats because we’re never sure if ‘it’ is going to suddenly appear around the corner. Yet the music also works as a great red herring, as sometimes nothing happens. We’re always looking towards the backgrounds, waiting to see someone or something emerge and when someone does, our hearts stop as we won’t know if this person is real or not. The director uses very inventive camerawork to manipulate what we can and cannot see and every shot is framed in such a way that it genuinely feels like we’re only a second away from danger. I remember making fun of a movie called “The Pyramid” for telegraphing a scare by using an odd angle that made it too obvious someone was about to be impaled from behind. You couldn’t be scared because it was obvious- and awkwardly filmed, in contrast to the stunning cinematography present here. In “It Follows“, every scene is designed to telegraph a scare, except they won’t often come. There will be a medium shot where a door is open or a pathway is noticeable in the background and I’d expect the demon to emerge from one of these areas- especially as its theme song might be playing- but then it never arrives. Many will deride this as being the horror equivalent to blue balls, but for me, this meant that I never completely knew when something could happen. There isn’t a single moment where the characters feel safe for this reason and this made for a troubled viewing as I really had to pee. But I was convinced that if I went to the bathroom, the demon would show up and kill everyone without me being there to watch it. That is true suspense!

Speaking of which, “It Follows” is a very slow paced movie. Many will probably whine about how they got bored- I didn’t- and how there needed to be more action. While I do understand the complaint, I thought the methodical pacing heightened the tension, making the scary sequences stand out more. While David Robert Mitchell focuses primarily on suspense and atmosphere, he does deliver some really effective jump scares. They’re well earned and succeeded in freaking me out. There is a lot of symbolism and thematic material for those who like that kind of stuff, but while I could care less, I did find the artsy camerawork to be rather appealing. There are a lot of shots involving nature, whether it’s bugs crawling or animals frolicking and many might find this to be self indulgent. Yet this made me think of the deceitful boyfriend and this game he plays with Jay. He has to pick a person from the crowd whom he would want to change lives with and he selects a young boy- because the kid has his entire life in front of him. I doubt he would’ve picked the boy if he wasn’t going to be looking over his shoulder for the rest of his life, which he likely took for granted. In contrast, Jay seems to have a healthy appreciation for life from the beginning, taking in all the beauty of the world (ie, artsy cinematography, many of these shots coming from her POV). This makes her character arc that much more tragic, as the visual style becomes increasingly more bleak along with her mental state…and eventually this wonderful side of her is lost to despair. Honestly, this level of depth from the director impresses me more than the symbolism everyone will talk about- as if it takes any real mental powers to ‘get’ the meaning behind a demon bleeding profusely from its vagina. This level of artistry effects how we perceive the characters and made me care about them…while admiring the nice scenery. As a side note, the lighting was very moody as well, being very old school in its use of grim colors.

Anything else I can say? I will admit to taking issue with the finale, as I wasn’t really sure what the plan was. Why did they think water would make a difference? Why didn’t anyone ever consider moving out of the country? I’d be interested in seeing ‘It’ cross an Ocean. I did find it odd that considering how important sex is here and how there is a significant amount of nudity, the sex scenes were very tame…They do realize they need to take their underwear and pants off, right? The ending is…either brilliant or frustrating, or maybe it’s brilliant because it’s so frustrating. The lack of resolution made me groan, but the more I think about it, the more I believe that was the perfect way to resolve things. I’m a little worried that based on my description, you might leave this review thinking that this is some sort of arthouse experiment. “It Follows” might be slow and offers the opportunity to explore it beneath the surface level, but this is a definitive horror flick. There are a lot of terrifying moments and spooky imagery, but I wanted to stress these unconventional strengths because they added so much to the overall impact. The character writing, the mystery surrounding the demon, what we know of the demon, the slow burn suspense, the implications of unseen terrors and the directors creative style elevated this beyond just another horror picture. If you’re into the genre, go and see this movie ASAP. But expect a ‘good’ film, so you’re less likely to set yourself up for disappointment. Every viewer will have a different reaction and you may think this is a strong flick, but not necessarily a scary one. Or you might fall asleep. But I do believe “It Follows” is worth the risk.

Overall: I thought “It Follows” was great, but I can see it polarizing modern horror fans due to its ambiguous nature and slow pace.