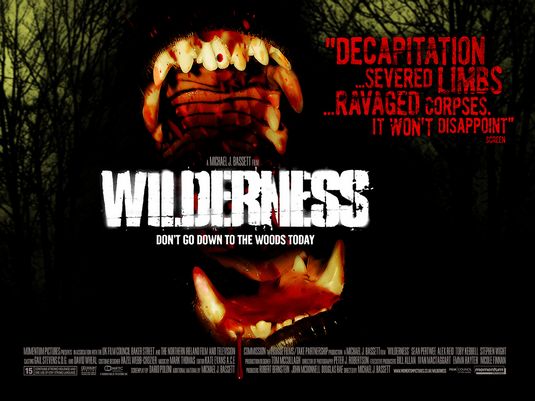 Plot: A group of juvenile delinquents get sent to a small island for team building exercises after one of their own commits suicide, but someone begins hunting them down.

I’m pretty sure I had already seen “Wilderness” when I had previously watched “Paintball“, although the former was released in 2006 and the latter was a 2009 movie. Hmmm, that must mean that the filmmakers behind “Wilderness” had travelled back in time in order to steal from “Paintball“. Time travel plagiarism is a topic that needs to be discussed more! I was interested in this feature because even though it might not be original, the ‘group of people being hunted by a menace on a small island’ scenario has always been a favorite of mine. Plus, you have Michael J. Bassett at the helm when he was still known as the director of “Deathwatch” and not as the director of “Silent Hill: Revelation 3D“. Even though I was expecting a horror movie, “Wilderness” is actually a slasher/ survival thriller hybrid with plenty of action. It offers nothing I haven’t seen before, except maybe its adoration of asshole characters, but it’s packaged nicely in a briskly paced, gory, thrill ride. That is enough to satisfy my questionable tastes.

It’s easy to condemn the characterizations as unlikable, because they are. Everyone is portrayed as pissy or pussy, with no middle ground. Even the characters whom are supposed to be nicer and more reasonable still come across as incredibly hostile in the majority of their interactions. What makes this complaint more complicated is that the movie knows this. They are SUPPOSED to be detestable. That is what drives the majority of the plot. Plus, they’re juvenile delinquents who are regarded as being the worst of the worst in their facility and the actors do a great job at making you despise the characters they are playing. So I’m not sure I can really criticize this, as that is the point. What I can criticize is how stupid every single character becomes in response to the threat. They waste time arguing, fighting with each-other and making illogical decisions for the sake of furthering their own fates. Even worse, everyone is kind of boring and interchangeable. The only two characters who stand out as intriguing are Lewis (Luke Neal) and Callum (Toby Kebbell). Lewis actually has a character arc, even though he’s not one of the primary players. Callum only made an impression because he is the protagonist, but his characterization is hard to describe. He had good attributes- he’s not as sadistic as his companions, has a lifelong plan and showcases some leadership abilities. But he also can be cold, mean spirited and violent. I believe the filmmakers wanted to make an ambiguous character out of him, as you never knew what he was going to do next (will he be a hero or villain?), but I felt total detachment from him in the process. I never understood who he was or why I should care for his survival. But in general, the characters either bored me or annoyed me. Even if that was the purpose, it made their interactions unpleasant to watch. 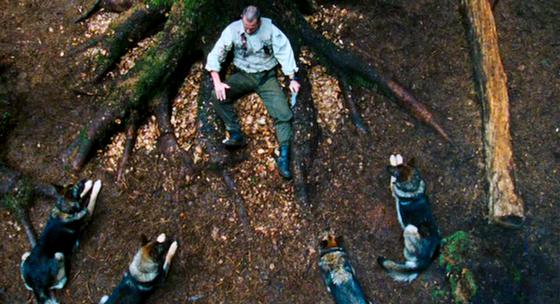 But at least “Wilderness” has fun in systematically destroying its unlikable cast and I had fun watching them get torn apart- and in some cases, literally getting torn apart. Although I was always annoyed at how the worst of them got the easiest deaths, the kills tended to be vicious. The gore was awesome and there are a few shots that are just hard to watch because the violence is so extreme. Don’t get me wrong, we’re not talking “The Untold Story“, “Cannibal Holocaust” or “Martyrs” level of graphicness, but that doesn’t take away from the brutal punches “Wilderness” packs. Some kills are fairly standard, but when something grotesque happens, it got under my skin. I thought the settings provided plenty of nice cinematography and while Bassett is more restrained compared to his work on “Solomon Kane” and “Deathwatch” (or even “Silent Hill: Revelation 3D“), he does showcase some style. I love how the blood is bright red, which makes a nice contrast to the otherwise bleakly colored visuals. But Bassett isn’t going for atmosphere, which is a disappointment because that’s where he excels. He focuses on a fast paced, intense narrative and he succeeds. I felt the tension, even if I didn’t care for the characters. The villain is an off-screen menace and his use of camouflage was pretty creative. I wouldn’t call “Wilderness” scary, but it was pretty exciting.

I do believe that certain reviewers play up the ‘survival thriller’ angle. I’d say “Wilderness” is a slasher that has a few survival thriller traits, which gives the movie a different flavor, even if it’s the same kind of food that most slashers are.  It’s primarily about the characters running, hiding and arguing as the villain hunts them down with his murderous dogs. I didn’t mind this, as anything else would’ve probably slowed the movie down and its fast pace is arguably “Wilderness“‘s best attribute. But if you want to be entertained, you must contend with the fact that you’re going to be following a bunch of insufferable wankers whom won’t command any sympathy. But “Wilderness” wants you to want everyone to die, so…mission accomplished? Yet it has another underlining flaw that will keep the movie down. I doubt I’m going to remember it. It’s fun and I enjoyed myself while watching it, but nothing stood out as especially unique or exceptional. It’s the quintessential ‘watch once, have a good time watching it and never watch it again’. However, I do stress that horror fans should watch it at least once. I’d say it’s somewhere between a 2.5/4 and a 3/4 star rating, but I guess I will be more generous because it succeeds at its goal.

Violence: Rated R. It can get pretty nasty.

Nudity: There is a sex scene, but you don’t see any actual nudity.