“Deathwatch” dared to explore territory within the horror genre that most filmmakers tend to shy away from. What happens if you take some sort of War story, but then turn it into a horror film? That has to be one of the most underused concepts with either genre. Why? It’s possibly because of tastes. Isn’t war horrific enough without zombies or ghosts attacking people? I personally suspect that budget restrictions are the real reason, however. War movies cost a lot and horror movies don’t. yet here comes “Deathwatch“, a war/horror film that I can swoon over. 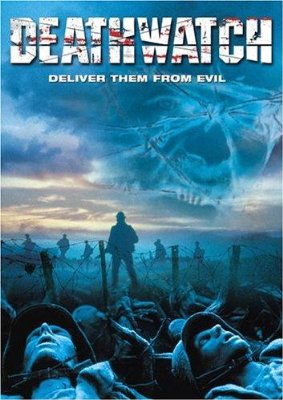 Plot: A battle on the western front goes poorly for the soldiers of British Company Y and they are mostly wiped out, the remaining troops trapped behind enemy lines. The survivors traverse through a misty fog when they come across a German trench. Only three Germans remain and two are immediately killed off, but all three were terrified of something. As they investigate the trench, they discover that the place is piled with bodies. Soon, mysterious events begin to plague the survivors and they begin to suspect that the trench is being haunted by…something. Or are they just going mad?

The first thing one notices about “Deathwatch” is its thick, morbid atmosphere. The film opens with a battle sequence that is surprisingly well executed for a film with such a small budget. But what stands out the most about it is the claustrophobia. All around the protagonist, Shakespeare (Jamie Bell), bombs are going off, bullets are whizzing past him and people are dying left and right. His cowardice that follows is understandable because there’s something suffocating about it. The morning after leaves the survivors wandering a fog filled land and we wonder if they are in purgatory. Yet the fog provides an interesting aesthetic as we watch the soldiers try and figure out where to go. Then there is a gorgeous shot of the trench being revealed.

It’s here that the movie goes all out on us. A great scene that foreshadows what we’re about to get is when a character steps IN a dead soldier. It’s disgusting, creative but it doesn’t fall into the realm of exploitation. What we imagine is far more disturbing than what we see. The trench is full of dead bodies that adds to our sense of unease and we wallow in the muck with the characters as they struggle with rain, mud, rats and the occasional bout with barbwire. The loud and pulse pounding noises are maddening. Then the characters must endure total darkness at night, which means something evil is most definitely lurking out there. Director Michael J. Bassett does an excellent job when it comes to using the foreground and the background, making sure we see plenty of shadowy figures that seem to merge with the scenery. But he also allows for some breathtaking wide shots, showing the trench in all its glory. These moments are still haunting, but in a more beautiful way. My only complaint is that the lighting is a bit too dark during the night scenes, making a few moments sort of incomprehensible. 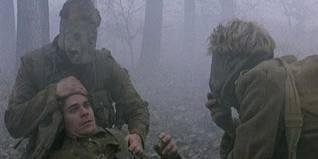 “Deathwatch” might be a little bit too ambiguous for its own good, as even I was scratching my head profusely by the ending. But I also like a little ambiguity with my endings. One thing I appreciated about the movie is that you spend the film wondering if the characters are being plagued by something supernatural or if they are hallucinating from gas. I also respect that the movie was never fully resolved, but I do have to admit that they may have gone too far with it. I can’t tell if the movie was just so intelligent that you have to use your brain to put the pieces together or if the film just wasn’t sure how it wanted to end, so merely made the riddle impossible to solve. The pacing is slow, but it’s in a way that builds suspense, which makes the pay-offs more satisfying. This paragraph really is about the things that you might like or dislike. I personally dug the confusion and the carefully calculated pacing. But I won’t deny that sometimes I was eying my watch and blinking in confusion.

So “Deathwatch” provided everything I wanted out of a war-horror film. But it’s not perfect. In fact, the flaws are rather depressing.

While the actors do a stellar job, as I would expect from British veterans, the characters themselves are cliches at best. Indistinguishable at worst. Bell’s character is the developing hero and Andy Serkis (yes, as in Gollum) is the psychopath. There is a religious character, a pitiful wounded guy, a pervert, a respectable Sergeant, an inexperienced officer and the dude who’s always freaking out. But the truth is, it’s hard to tell any of these people apart when they are covered with mud in the heavy rain. What little fleshing out we get only adds to the stereotypes, but good luck telling who is who during the horror/action sequences. Hell, good luck telling who is who during the more calm moments. The weak characterizations made me care less for them and makes their gradual descent into insanity hard to swallow. It keeps the film from reaching its full potential.

Still, I liked the atmosphere, suspense and aesthetics present in “Deathwatch”. It looks great, it suitably creepy and it’s different, using its superb location to maximum effect. I enjoy watching movies with unusual and eccentric concepts, such as when hybrids are born from different genres. Some movies have toyed with combining war and horror, such as “Shutter Island” and “Hellraiser 3“. I have since learned of other films that have exploited the gimmick to its fullest, but “Deathwatch” was the first of its kind that I’ve watched, making the premise seem even more innovative. It’s failures are frustrating, but it’s successes make up for them.

Violence: Rated R worthy. It can be pretty nasty, with one scene involving barb wire that felt like it belonged in a “Hellraiser” movie.

Overall: “Deathwatch” is one of the few war/horror combinations out there and it does a good job as such.