As an American, I’ve heard many of the “French are pussies” statements among my fellow countryman, especially around the time of the Iraq War. Yet whenever I’d listen to these rants- maybe even reluctantly joining in myself- I would look around in fear. For what my fellow Americans don’t know is that the French are the most terrifying and wrathful people in the entire world. My evidence? I’ve seen their horror films and they scare me. I, of course, have to presume that a countries horror genre represents the peoples mentality as a whole. Just look at today’s subject, “Martyrs”. It is one of the darkest and most harrowing horror films I’ve ever had to experience.

(Written and Directed by Pascal Laugier)

Plot: The film opens with a battered, little girl running down the streets. We soon learn that she was abducted and tortured until she escaped, but that her captors were never found. The girl in question- Lucie (Mylene Jampanoi as the adult version)- grows up to be bitter and traumatized. She’s being plagued by a creepy specter who might just be in her subconscious. Her only possibility of moving on is finding the people who did this and make them SUFFER. So she, and her friend Anna (Morjana Alaoui) decide to hunt them down. That’s all I’ll say because I don’t want to reveal too much.

I’ve actually spent three days mulling over what I witnessed in “Martyrs”-which sounds like a pun now that I think about it- because this is a very tricky movie to review. To just classify the film as a very subjective experience is a bit lazy and cheap, but it’s also true. So let’s begin with this. “Martyrs”, whether you like it or not, is a stunningly well made genre piece. The director knows how to set up horror sequences and there are plenty of shocking and startling jumps. The make-up effects are phenomenal, adding a whole new level of grotesque body horror to the proceedings. The cinematography is moody and the editing is cruel in its patience. I kept itching to see what was behind every corner, a sure sign that the films building dread is working. The somber music is haunting but beautiful, with a few moments sticking out as true cinematic art. In America, the horror genre is comprised of enthusiastic but inexperienced or untalented filmmakers who deliver entertaining, low budget affairs (at best). French horror has a lot more ambition and effort put into it. There is better cinematography, direction, lighting, writing, acting and music in their films. I mean, does anyone even remember the music in contemporary American horror films anymore? The acting in this movie is superb too, but I want to wait a bit before I go into that. My point is, “Martyrs” is horror cinema at its finest in terms of technical achievements. But it will spawn many detractors who won’t care about any of that.

I’m not sure if I can call myself an expert on French horror as the only examples I’ve seen are “Inside”, “Them”, “Deep in the Woods”, “High Tension” and now “Martyrs”. The difference between France and America when it comes to the genre is that we bow to the taboos, they don’t. The French can bring a whole new meaning to the word ‘utter downer’, as they just don’t have any limitations. Our gore is cleaner and the targets are acceptable. Their gore is uglier and harsher and their targets can be children, pregnant women, etc. There are far less hope spots and on a less depressing note, “Deep in the Woods” is the only non-homosexually driven movie I’ve seen where the protagonist happens to be a lesbian. I like that kind of stuff, as it makes these films unpredictable and that is arguably what “Martyrs” thrives upon the most.

Good or bad, I usually can tell what’s going to happen during a horror film. For example, the whole subplot involving Lucie being haunted by a crazy, creepy old woman is pretty easy to deduce. We know it’s probably going to be in her head, so I’m presuming that this is a psychological thriller. It should be noted that this creature is incredibly creepy and the direction manages to make her scary so I wasn’t even complaining about the predictability. But it resolves that rather quickly in a very effective manner. I also simply wondered if it was going to be a revenge type of movie, where the victims torture their tormenters, but once again I was wrong. Half way through the film, I realized that I had no idea what “Martyrs” was or where it would go.

Yet the movie also makes sure that we care for the girls. When we see them interact as children, it’s so adorable and heartwarming. I don’t know why, but when we see them as kids, it makes them seem more like real people than film caricatures. Maybe it’s because the characters in most horror films just feel like they are made to die, so showing them in another time adds dimension? Who knows, but it worked and my heart really went out to these ladies. Most splatter/torture porn features like this aren’t so emotionally charged. This is carried by the two actresses playing the roles, whose brave performances deserved Oscars. They also add to the realism that made their characters so sympathetic. There reaches a point where in my mind, they ceased being actresses and became genuine people who were suffering right in front of my eyes. 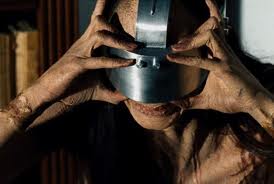 But now we get to the more difficult elements of the film. A lot of people are going to hate this for the brutality and violence, which is kind of a stupid complaint if you know you’re watching a gore film. But I think the tone of the film is going to upset people even more than that. Even “Hostel”- a grim and violent piece in itself (that feels like a Disney movie in comparison to this)- gave us some moments of humor and relaxation. With this, it’s all devastation. There’s never a feeling of light at the end of the tunnel and it just might be too suffocating for you. The whole last act is another potential problem. It is a bit redundant and I was a little miffed that it almost ceases being a horror film for the sake of being horrific (if that makes sense). People might think it’s pointless, or that the revelation as to ‘why’ is odd and stupid. Or the ending in general might just be a little too baffling. I can see these complaints, but I think the point was that the director was going against all conventions. It’s frustrating because it destroys our comfort zone. A lot of people are seeing something deeper within the movie, which I personally don’t buy, but the genius about it is that people are arguing about the hidden messages. Do people argue about thematic material when it comes to most American horror films? Nope! On the other hand, many viewers have leveled this movie with “misogynistic”, which I strongly disagree with. I’d call the movie fatalistic or nihilistic, but it never takes any enjoyment out of tormenting its females. It’s just…sad.

“Martyrs” was not an enjoyable experience, but it is an effective one. I was startled at how bold French horror is. But I was also impressed at how…respectful…the technical aspects of the film are. Their horror films go much farther than ours, but they also have actual talent behind (and in front of) the screen. I think I prefer “Inside” because that is a more traditional horror film in that it relies on framing and lighting to scare us. In fact, I also prefer the first half of “Martyrs” than the second because it’s more of a horror film than an endurance of human suffering. But I think that this is the most ambitious and horrific of the French horror movement. The French are easily the most dangerous people in the world based on their horror films. Well, second to the Serbs anyway.

Violence: NC-17 worthy. This isn’t technically the goriest movie I’ve seen, but the context surrounding the violence and the bleakness of it somehow makes it seem worse than it is.

Nudity: There is a lot of it, but it’s never EVER pleasant. There is a lesbian kiss though that the pervy side of me enjoyed.

Overall: Watch “Martyrs” if you want to see a depressing, unsettling horror movie that happens to be well made. If this doesn’t excite you, AVOID.