Plot: Haunted by the abduction of his son, which occurred 10 years ago by a serial abductor, Officer Dwayne Hopper (Patrick O’Kane) has let his despair and obsession ruin his home life. But he begins to suspect that a prisoner from the holding cell, the mysterious and creepy pharmacist named Perkins (Richard Brake), is the man responsible. Little does he know, the pharmacist has brainwashed the kids to be mindless murderers and once they are unleashed, they will prey upon their little town.

“Perkins’ 14” is a complicated situation. It had rather curious origins in that the movie was developed by Massify.com, where writers would upload their story concepts and actors would send in audition videos. It would then become part of the “After Dark Horrorfest” festival, which tends to distribute and produce films which are okay enough to be watchable, but not necessarily good enough to pursue. I’ve spent quite some time pondering “Perkins’ 14”, trying to decide if I should be more negative or positive. There is both so much that could be said about it, yet at the same time, so little. It’s a mess of good, bad and a lot of mediocre. But if I could sum the project up as anything, I’d say this: “Perkins’ 14” is too absurd to take seriously, but too bleak to be entertaining. Yet sometimes- and I stress sometimes- the film strikes gold. But then again, sometimes that gold turns out to be feces…metaphorical feces…there isn’t any actual feces in this movie…so…yeah…

Speaking of feces, within the first five minutes, I felt my bowels cry out in despair. One of the first things we have to endure is a daughter (Shayla Beesley) bitching at her Father- the protagonist. Ugh, when will filmmakers learn that they probably aren’t talented enough to successfully pull off this dynamic?! But just before I want to see him slap her, his wife (Mihaela Mihut) makes a reasonable request and he acts like a douchebag. While he’s not abusive, there are shades of that possibility which linger based on their interactions. We’re supposed to feel sorry for him due to the loss of his son, but his attitude makes him pretty unlikable. Yet the daughter is bitchy and the wife turns out to be having an affair, so I can’t sympathize with them either. When we meet Perkins (Richard Brake), we’re not entirely sure whether he’s a killer or if Hopper is going crazy. Well, that would be the intent, except we know from the title alone that he will be the villain…Plus, the guy looks like someone who would be watching children at a park, offering them candy and luring them into his van. Seriously, one glance at him and you will immediately profile this guy as some sort of child molester. The thing about “Perkins 14” is that the filmmakers seem intent on making us hate everyone. Often, new characters will be introduced (to be victim fodder) and will do something horrendous, presumably so we won’t be sad when they are devoured by the 14 (you only see like four) children. Ironically, the only character who wasn’t detestable was the druggie guitar player, who fusses over his hands and wants to plow the virginal daughter. In a strange subversion of the norm, she is the one trying to seduce him and he’s just going along with it. When his hand is inevitably mangled, it’s actually sort of tragic. 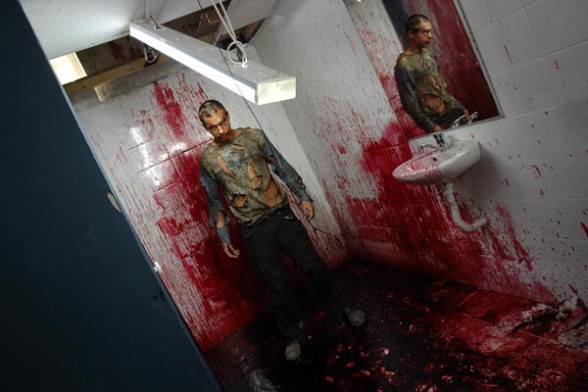 Yet there is a reason for this. “Perkins’ 14” is trying to tell a deeper story, about the fall of the family unit. It stresses the characters flaws to show that once the son was taken, their happiness was taken with him and they’ve retreated into their own selves, finding a twisted comfort in their selfish indulgences. “Perkins’ 14” deserves credit for trying and it does have some pretty interesting ideas, like how despite everyone’s despair, people tend to move on rather quickly and unceremoniously. Yet I just didn’t feel it was handled properly. The writer needed to somehow find a way to utilize all of this for maximum dramatic impact, while not making the viewers want to personally disembowel these characters and eat their intestines…I can’t be the only one who was tempted to do that…okay, apparently I was. Let’s move on! The acting is pretty uneven. Characters accents’ tend to change sporadically and sometimes they over-act, ruining the tension of the scene. Patrick O’Kane is probably the worst offender. He’s solid when he’s being low key, but when he expresses rage or sorrow, he’s unintentionally amusing. Richard Brake is also over the top, but in a Jeffrey Combs kind of way, so he’s pretty fascinating to watch. Special mention goes to Shayla Beesley, who was shockingly good, despite playing an annoying role. Still, the actors do occasionally make certain scenes work. I might’ve criticized O’Kane, but he helped sell the scene where he confronts his son at the end. That was surprisingly heart wrenching…even if it ended just as I thought it would. Without spoiling anything, “Perkins’ 14” is one of those movies that’s predictable in its attempt to be unpredictable.

The first half is a rather moody thriller, focusing on Hopper’s obsession with Perkins. Hopper’s reasoning for suspecting Perkins is flimsy, but at least the movie acknowledges this by having other cops call him out on his claims. Still, we definitely get the impression that Hopper is on the edge of a nervous breakdown and Perkins seems awfully determined to press his buttons. Their interactions are pretty engaging, although I wouldn’t say “Perkins’ 14” was riveting. This is definitely no “Silence of the Lambs”. I like how the director uses lighting, obscuring Perkins’ face in the shadows. Unfortunately, the first half is undermined by some blatant padding. There are a lot of quick-cut flashbacks to previous scenes, as if we need to be reminded of events which occurred two minutes prior.

When Perkins’ 14 abductees who have been brainwashed, drugged and turned psychotic are released, the film reaches its highest point and its lowest point. On one hand, I loved the apocalyptic hues which came with this reveal. When Hopper is hearing all of these distress calls about the various attacks and enters the town, only to see the aftereffects of their chaos, I thought it was chilling. Unfortunately, due to the low budget, most of the mayhem occurs on-screen and the characters quickly board themselves into a police station. There are also some gaping plot holes, like how could 14 teenagers overrun an entire town. Based on what is said, the drugs would minimize their pain- but that shouldn’t mean they are indestructible. Furthermore, they say they’re minds are now mush, but that doesn’t stop them from using their brains whenever the plot calls for it. Finally, while there are some artsy moments with the cinematography, the majority of the attacks are brought down by awkward staging, murky lighting, jittery camerawork, erratic editing and the irritating presence of flickering lights. Filmmakers need to study “Psycho” more to understand how disorienting the viewer could work. The first rule is don’t make the entire finale like that, just restrict it to a single scene. However, I do suspect that whereas “Psycho” used disorientation for artistic reasons, “Perkins’ 14” is using it to cover up the low budget. The pacing becomes incredibly uneven too. One minute, it’s fast paced. Then characters will find shelter and talk for awhile, which slows things down too much. The first half was methodically slow, but the second half keeps speeding up and then slowing down, which is exhausting.

The first half, while flawed, at least was consistent. It was intended to be depressing and grim, emphasizing the characters troubled emotions over the carnage. But that was when it was about a heartbroken Father confronting the monster who may have caused that heartbreak in the first place. But then the story becomes about Perkins’ brainwashed victims,, who are hopped up on PSP, which turns them into super strong, mindless killers who act like the infected from “28 Days Later”. Then the previously established dark tone starts feeling out of place. It’s never intended to be silly or conventionally entertaining. It’s grim up until the very end. But by having characters do stupid things so they can die without problem, or by relying on the ridiculousness of the 14 killers somehow doing all of this damage, the film seems like it shouldn’t be taking itself so seriously. As I said, it’s too absurd to be tragic, yet too bleak to be fun. This has to be balanced with the occasional flashes of inspiration, mixed in with the occasional bad movie moment, where it’s hard not to facepalm. In the end, both sides kind of cancelled each-other out, leaving me neither angry or happy. But at least it was better than my previous internet-produced movie experience, “Smiley” and I would watch “Perkins’ 14” twice in a row before enduring “Wicked Little Things” or “Penny Dreadful” again.

Violence: Rated R. It does have some gory moments.

Overall: If “Perkins’ 14” sounds interesting to you, I’d say go ahead and give it a look as long as you’re not paying a lot of money for it. If not, don’t bother.