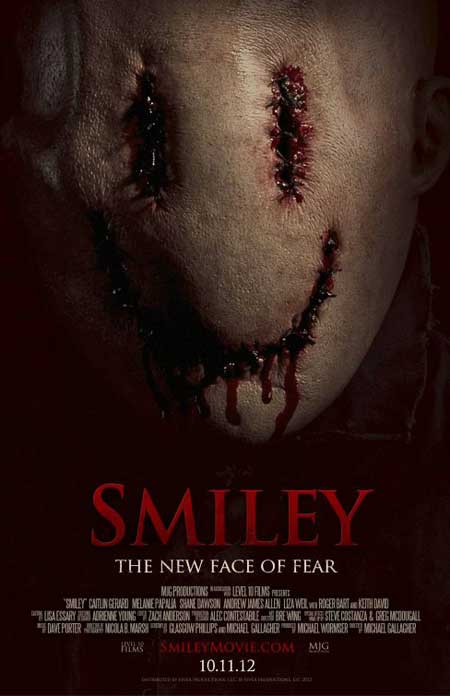 Plot: Ashley (Caitlin Gerard) begins her first College Semester away from home, despite having a troubled past. Unfortunately, she’s going to have a troubled future too, as she becomes embroiled in an Urban legend that might actually be real. If you type ‘I did it for the lulz’ three times in a chat-room, a mysterious killer will appear and murder the person you’re chatting with. But then the killer will also target the person who summoned him. When Ashley foolishly tests this theory…what do you think happens? If you answered: “A shitty movie will occur”, you get an A+.

I remember “Smiley” briefly taking the internet by storm due to starring some internet celebrities (whom I’ve never heard of) and boasting a few admittedly creepy stills, prior to its release. Then it came out and was pretty much hated by everyone. “Smiley” suddenly found itself being opposed by the combined forces of critics- professional and amateur-, general audiences and even internet prowlers, who all metaphorical held hands as they faced a common enemy together. The poor movie was forced to retreat in obscurity, waiting in the darkness until the collective evil of the web could gather once more, giving it the strength to live again. But is the film that terrible? I suppose. You see, disguised underneath the heavy handed dialogue, internet lingo, gimmicky casting choices, bizarre performances and the ridiculous plot lies something far worse than a bad movie: A conventionally bad movie. Actually, this is only partially true. While the flick is ripe with cliches, it reeks of self importance. It’s as if the filmmakers wanted to make this generations version of “Scream“, but lacked the competence to even make this generations version of “Urban Legends 2“. “Smiley” isn’t JUST a conventionally bad movie. It’s a conventionally bad movie that thinks it’s good.

I have to give some credit to the filmmakers for dreaming up a semi-intriguing plot, but they lacked the skill to make the screenplay intriguing. Beyond the premise, everything is messily predictable and cliched. Ashley has a history of mental problems, so one of the key threads of the story is how you aren’t sure whether or not everything is just in her head. I’m a sucker for ambiguity, but how do they treat this? Expect a lot of nightmare sequences. Hell, during the second half, “Smiley” stops even trying to pretend that these scenes are actually happening. I mean, come on, they even have nightmare scares occur WHILE SHE IS IN BED! Of course she will wake up, revealing that it was all just a dream. Ultimately, these ‘scares’ became quite repetitive. There’s also plenty of boo scares, the most familiar being when Ashley bumps into someone in the Library. Why does this always happen in Libraries? Ooh wait, there’s even more! I haven’t had to deal with “Exposition 101” in awhile! This is when there will be a scene (or scenes) that take place in a classroom, where the teacher discusses the current topic…which just happens to have something to do with the actual story- either thematically or literally. I hope you like that kind of stuff, because there’s a lot of it here. What else? The police don’t take the crazy girl seriously, although this is semi-justified. But we’ve seen the same scene before, just with different actors. There’s the usual hope spot near the end, where it looks like everything is going to be okay, only for the characters to realize that there is still 20 minutes of screen-time left. It’s even stranger as this hope spot comes out of nowhere. One moment, Ashley continues her descent into madness. The next, she’s telling her psychiatrist that she’s fine and suddenly everything seems sunnier. The lighting isn’t as bleak, everyone acts cheerier and we’re supposed to think everything has worked out. Quite the asspull. Actually, this is followed by a retarded twist ending- which I saw coming- which in turn is followed by ANOTHER retarded twist ending- which I also saw coming. Quite the asspulls. Maybe if “Smiley” was made during the 70’s, I would’ve been shocked. But since these twists have been executed so many times before, the only joy that came from them was the satisfaction that I was right. 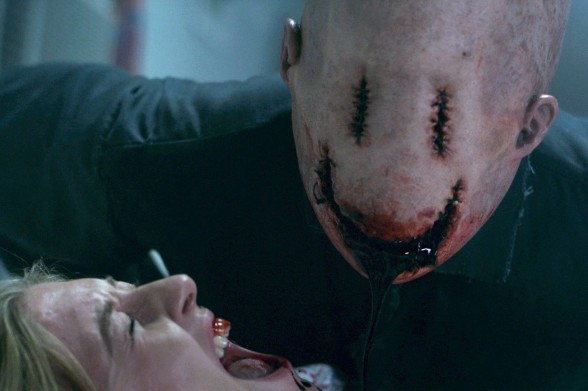 Yet most reviews probably won’t stress that “Smiley” is a conventional slasher. Instead, they will talk about- and by that, I mean ‘make fun of’- the acting. Honestly, this didn’t bother me as much as I thought it would. Is the acting bad? Yeah, but at least everyone is trying. The performances are wild and lack restraint, for which I blame the director, but at least everyone has a lot of energy. I can see why these youtube celebrities are popular, because they have memorable personalities. This kept them from being boring, but they also seem to think they’re in some sort of parody. Their over-the-top mannerisms would’ve felt more at home in one of those “Scary Movie” sequels. While this occasionally provided some unintentional amusement, it also diminished the suspense. The opening sequence alone felt so phoney that I was sure I was watching a comedy that happened to forget the jokes. In essence, I couldn’t take “Smiley” seriously, but I wasn’t laughing either. Everyone has panned Caitlin Gerard, but I didn’t think she was any worse than anyone else. I think she can become a good actress, but needs a better director. Since the acting was off all around, even by epic veterans such as Keith David, I think the director needed to do a better job at ‘directing’ them. The only actor who shined was Roger Bart, who actually made the ‘Exposition 101’ scenes fairly compelling. Another reason why the acting might be off is that the dialogue is just too heavy handed. Characters are constantly philosophizing and use lots of internet terminology that I couldn’t always follow. There is one funny line where a character interrupts his own monologue to say something along the lines of: “We should drop acid and continue this discussion“. That made me smile. On another note, I also love how “Smiley” takes place in an alternate world where internet trolls are attractive people with social lives. Yeah…That’s really believable…

But “Smiley” committed the worst possible sin that a slasher can fall victim too: It’s boring. The suspenseful moments aren’t really suspenseful because there was a lack of diversity. Too many boo scares, too many jump scares, too many dream sequences. You’re just watching the same jolt over and over again. After the first 12,000 of those, I was more than a little numb to it. The overly dramatic zingers were supposed to make me flinch, but they only added to the unfunny parody aspects. There’s a lot of screen-time dedicated to the characters and while I applaud the attempt at fleshing them out, EVERY SINGLE INTERACTION IS UNPLEASANT TO WATCH. Why is it that every character-oriented scene is so awkward? Almost every character is an asshole and that is their dominant trait throughout all of the screen-time. When Ashley meets up with these people, they are rude, sarcastic and even a bit cruel. When Ashley meets the slightly more sympathetic people, either she will act like a goofball or the person she’s talking too will act uncomfortable. Even the exchanges with her Father make you feel sort of embarrassed, because the convo is just awkward. There isn’t a normal conversation throughout the duration of the film. Someone is always being weird or cruel to someone else. 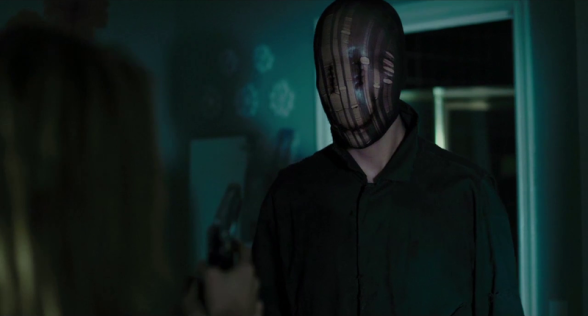 That’s really all I have to say. “Smiley” is annoying whenever it’s not trying to be scary and it’s dull whenever it is trying to be scary. The filmmakers had some big ideas, but packaged them in a conventional slasher. I have to admit though, I’m actually glad for some of the badness. These days, there’s nothing I hate more than mediocrity. I dislike movies that can be summed up as ‘by-the-numbers’, ‘cliched’ and ‘conventional,’ because it’s obvious that no one is trying. My time is then wasted. “Smiley” might be the same, but at least its lesser pleasant quirks sometimes distracted me from the blandness. The acting might be bad, but had the director hired legit actors, they likely would’ve been competently lifeless. With the cast we got, at least they’re giving it their all and their performances aren’t dull. The dialogue might be hilariously pretentious, but at least there’s some color to the lines. Even the stupid twists suggests that the filmmakers did want to make an engaging flick. I suspect that there was an attempt at being subversive, like “Scream” was, where it would use the conventions to its advantage. But then it backfired. It’s funny seeing them try to make a slasher that’s more than just a slasher, but then fall hard on their face in the process. Granted, this doesn’t stop “Smiley” from sucking. But at least it sucks with style.

Note: By the way, writers and director, please learn the difference between homage and plagiarism. “Smiley” definitely blurs the line between the two.

Nudity: Some sex-oriented dialogue, but nothing else.