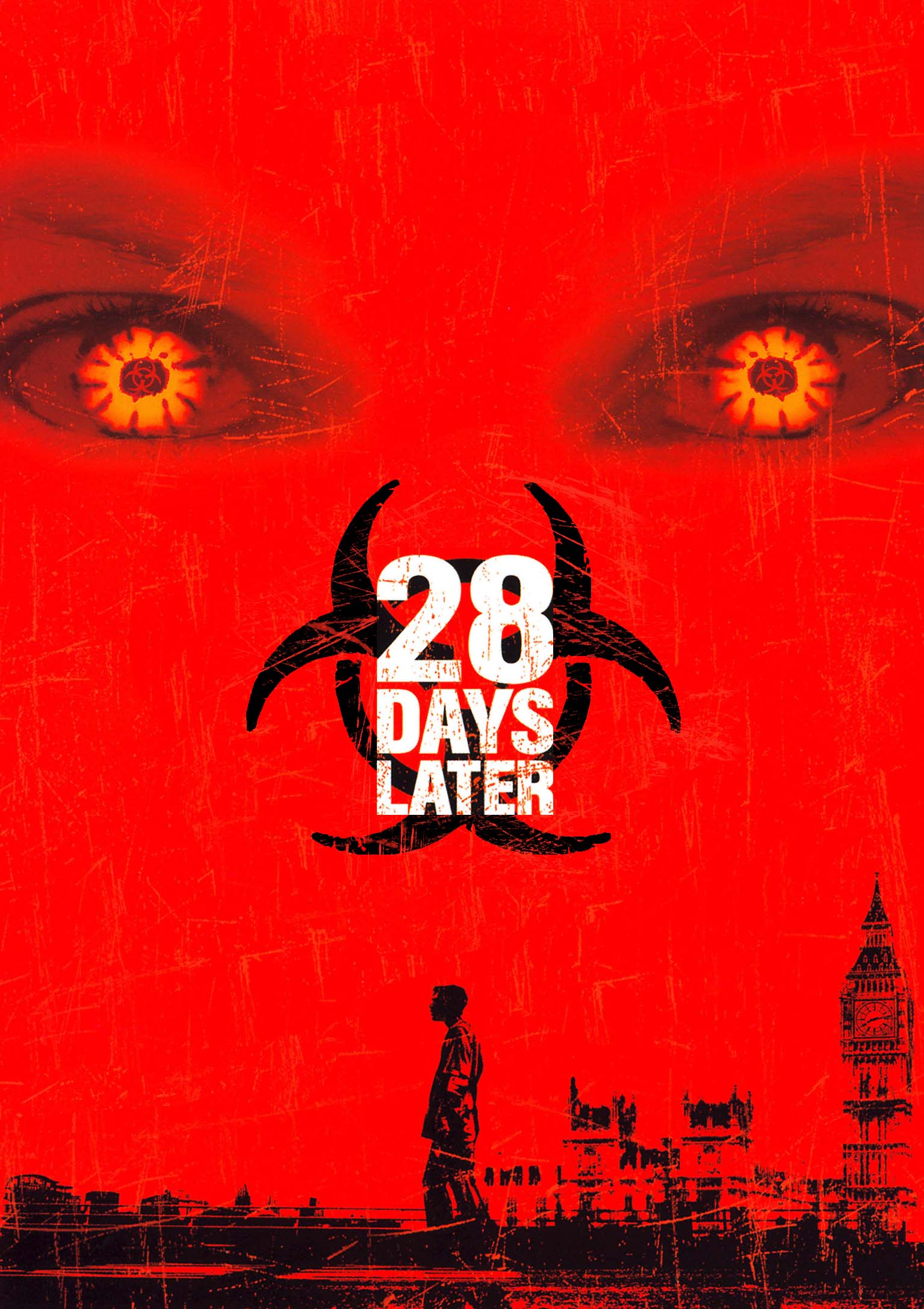 Plot: A mysterious virus spreads throughout Britain, turning the infected into rabid, murderous psychopaths. Jim (Cillian Murphy) has been in a coma since before the outbreak occurred and 28 days later, he finally wakes up. Now his country is a desolate wasteland and he teams up with a small band of survivors in order to find a possible military base.

I remember when “28 Days Later” came out, everyone was lauding it as one of the best zombie movies of all time. This immediately got my attention, as I had recently just viewed Romero’s “Dawn of the Dead” and Fulci’s “Zombie” for the first time and had fallen in love with that subgenre of horror. I dived headfirst in the theaters, the brain damage likely being responsible for me giving “Dragonball Evolution” and “The Last Airbender” passable reviews, but left a little disapponted. Sure, it was a solid effort, but I was underwhelmed. I had no intention of seeing it again until someone requested that I review it, so I gave it another look. Is “28 Days Later” a zombie classic? Well, no…because it’s not even a zombie movie. I do still believe that it’s overrated, but as an adult, I can appreciate the substance within the story and the artistry put in every frame. When I was a kid, I just wanted carnage and chaos.

The first thing you need to know is that despite often being lumped with the zombie subgenre, it is not really a zombie movie. The ‘infected’ are still technically living, but their minds are no longer the same. Even though it does follow a lot of the conventions belonging to the zombie movement, it also makes up its own rules. I’d actually classify “28 Days Later” as a post apocalyptic thriller/drama with some horror/zombie elements. This didn’t really bother me at the time, but I think I expected much more gore. Back in 2002, I was an even more shallow viewer than I am now and couldn’t admire the films finer points, which is strange because I did still like it. What’s ironic is that despite making every effort not to be a zombie film, it actually temporarily became a major inspiration for them. Running zombies suddenly were commonplace, as nonsensical as that sounds and that isn’t even counting the movies that embraced the ‘infected people’ concept. So like “28 Days Later” or not, there’s no denying its importance among the zombie subgenre, even if it’s not an actual zombie film.

For the sake of writing a (somewhat) coherent review, I am going to break “28 Days Later” into its three acts. It opens with some Eco-terrorists being morons and accidentally releasing the virus. I’d like to think that this is a satirical reference to the cliched ‘terrorists steal zombie virus’ premise that sets up the end of the world, but who knows what Boyle’s intentions were. 28 Days later, if the world hasn’t ended, then at least Britain has. Jim (Cillian Murphy) has no knowledge of the virus and has woken up to an empty London. The wide shots of the empty streets and landscape are stunning. Each visual is chilling, almost every shot telling a story of its own. The gradually building music is catchy and eccentric, not quite fitting in with what is happening on-screen, but it works anyway. The first act- even after he meets two survivors- emphasizes a feeling of isolation and claustrophobia. Despite being moody, it also contains the most interactions with the infected. So it’s not devoid of action either.

Despite not being a zombie movie, the first act is more-or-less playing out as one. The second half is where it transitions into a post apocalyptic thriller/drama. The infected play less of a role as Jim’s crew meets more survivors and together, they try to find an army base. Our protagonists evolve into a bizarre family unit and the cast starts to develop. Jim’s good nature is tested as he is forced to do some things that haunt him and the cynical Selena (Naomie Harris) begins to warm up to the strange family unit that they have created. “28 Days Later” becomes less about the infected and more about how the infection has effected our heroes. It also gives Boyle an excuse to show off some gorgeous cinematography as they explore the countryside. Every once in awhile they will be attacked, but the pacing slows down considerably. Please do not confuse ‘slow’ with ‘boring’. Because the characters are intriguing, I was perfectly fine following them as they talked and goofed around. 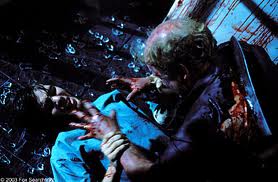 Then they find the soldiers and realize that the real terror has just begun. This is where “28 Days Later” starts to really borrow from George Romero, as the ghouls only seem present to set up the conflict between man and his fellow man. It will make you ask: “I wonder who the crazies really are?“. Up until now, we’ve seen humanity at its most triumphant, but now we see it at its most vile. It’s a fascinating finale that emphasizes the characters moral devolution over the mayhem, but it’s not short of that either. The action is masterfully staged, being comprehensible despite the shaky camerawork and heavy rain. I generally can’t stand erratic camerawork, but Danny Boyle uses it to enhance the action. It’s fairly creepy and suspenseful, but the music makes it intense and exciting. “28 Days Later” has a well crafted finale to a well crafted movie, so why am I not in love with it?

“28 Days Later” has an episodic structure and that is very difficult to pull off. It starts off slow, then speeds up, then slows down for the long time before speeding up once more. I’m always reminding my readers that being fast paced doesn’t necessarily mean it will be entertaining and having a slow pace doesn’t automatically make it boring. It’s a creative decision by the filmmaker, but in my opinion, fast and slow don’t always go well together. Personally, I believe it disrupts the mood. It also feels like three different movies being combined into one. But more importantly, when the pacing is all over the place, it makes the overall experience sort of exhausting. I presume the more die hard fans don’t agree with me, but this is why I’m not sure I’d call “28 Days Later” great. If you disagree with me, then you disagree with me. Congratulations.

Still, is there anything wrong with being really good? “28 Days Later” had a lot of talent both behind and in front of the camera and it’s no surprise that everybody would go on to achieve some level of respectability and fame. Cillian Murphy went on to play the Scarecrow in “Batman Begins”, Naomie Harris appeared in both “Skyfall” and the “Pirates of the Caribbean” sequels, Brendan Gleeson expanded his fame from England to England and America, Christopher Eccleston became a popular TV star and was in that stupid “G.I Joe” movie. The writer also wrote “Dredd”, which was pretty good. Of course, Danny Boyle became a ‘respectable’ filmmaker, helming other (overrated) works such as “127 Hours” and “Slumdog Millionaire”. I did like “Sunshine” a lot though. “28 Days Later” won’t likely be remembered as anyone’s greatest work, but it was a good start. It was followed by “28 Weeks Later”, which I thought was more exciting, but also more flawed.

Violence: Rated R. It’s not that gory, but it has some grisly moments.

Nudity: A fair amount by Cillian Murphy, some naked infected people and there is the threat of rape.

Overall: I think everybody should watch “28 Days Later”, but should expect a stellar movie instead of hoping for an exceptional one. If you end up loving it, then good for you!