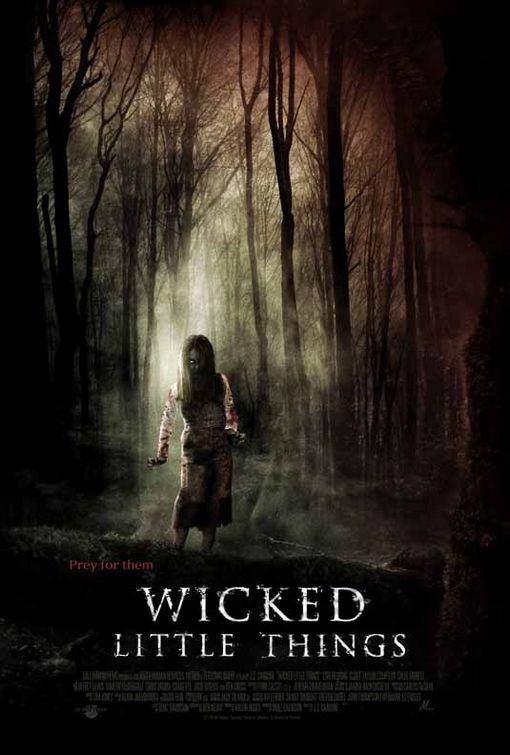 Plot: Karen (Lori Heuring) is a young widower with two daughters, Sarah (Scout Taylor-Compton) and Emma (Chloe Grace Moretz). Her husbands death left the family destitute emotionally and financially, his will only leaving them a house up in the mountains. So they move, but once they arrive they learn that zombie, ghost children plague these mountains. zombie, ghost children…

“Wicked Little Things” is another “After Dark” horror film, a studio dedicated to providing quality horror features. Sometimes they fail (“Penny Dreadful“) and other times they succeed (“The Final“), but “Wicked Little Things” can be chalked up as one of the failures. What’s sad is that it ultimately had talent behind and in front of the screen, along with a reasonably interesting premise too. But the movie ultimately ends up being padded, uninspired and VERY conventional.

The first thing we notice about the film is how predictably annoying all of the characters are. Sarah is an utter bitch, complaining about everything for the first 30 minutes of the film. Seriously, every line of dialogue seems to be whining! Emma sees the ghost of a dead girl and befriends her, wandering off when she’s not supposed too. Naturally, no one believes her and we have to endure characters constantly either scolding her or trying to find her when she gets lost. Karen is the closest thing to a sympathetic person here, but even then, that’s only because everyone else is that irritating. Actually wait, Hanks (Ben Cross) was sort of interesting. But everybody else is brutally one dimensional to the point that you wonder if the movie is being satirical. Even worse, so many of these characters don’t feel necessary and because you know they stand no chance of living, why should we care? The acting is slightly below average which is odd because the actors usually are pretty good. I guess they just had little to work with.

The second thing we notice is how by the numbers the movie is. It walks the path that you expect it to, whether it’s from the story or direction. When a character touches a door and it ominously opens, what do they do? They trespass onto private property to investigate. Then when the home owner returns, he presumably decided to sneak up on the person as quietly as possible so when they turn around, they will walk right into a jump scare. What’s funny is that the movie DOES THIS CLICHE TWICE! TWICE! There are literally no surprises within the story, so when the twist happens, I wasn’t even sure if it was a twist. The story comprises of people being rude to each other, characters searching for other characters and characters being victim to conventional scare tactics. It’s also funny when the protagonist spends the bulk of the movie investigating what we already know from the opening scenes. BORING!

Does the directing have anything to offer? I will give the movie this, some of the cinematography is really good. They have a nice location to exploit and when it’s drenched in fog, it does create a nicely, oppressive atmosphere. There are a few cool shots in general, suggesting that Cardone is a better director than he is a writer (he’d later go on to pen even more uninspired films like “Prom Night” and “The Stepfather“, both remakes). But he fails at building any real suspense because we know what’s going to happen and when they shall happen. He reveals the zombie children too early, so they don’t leave an impact. It also doesn’t help that the script has the characters die in the most dumb ways possible. One character is trying to push their car out from the mud while the girls press on the gas. When peril strikes, they try to warn him but he can’t hear them. Do they think of stopping the gas for a minute? Nope. It’s hard to take any supposedly scary sequence seriously when the script is just that stupid. Maybe Cardone is a pretty good director, but the writers gave him nothing to work with either.

“Wicked Little Things” sucks but not because it’s an awful movie. It sucks because it has no real ambitions to be anything but a mediocre flick. I am sick of movies that only desire to be mediocre! The script is devoid of any originality or creativity, instead of relying on the most blatant cliches possible. Sure, the film looks nice, so the cinematographer deserves a lot of praise. But it’s not enough to redeem such a dull experience. “Wicked Little Things” is the type of bad movie that doesn’t stick with you. It dissipates in your mind until you start to wonder if you’ve really seen it. So really, you’re just wasting time if you decide to watch it.

Violence: Rated R. It has its moments, but it’s not enough to make the movie worth watching.

Overall: Don’t bother watching “Wicked Little Things“. You probably will have already forgotten about it by the time the credits roll.