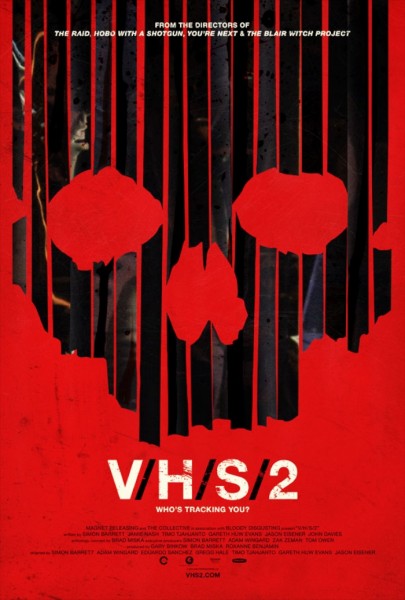 I wasn’t the biggest fan of “V/H/S”, the found footage anthology that garnered a lot of attention despite being dumped straight to DVD. It was an interesting experiment, but I saw it as a misfire. Sure, two of the six shorts were effective, but I disagreed with the narratives framing device, the placement of the films and the bi-polar tone. Of course, when the stories sucked, they sucked pretty hard, so that didn’t win “V/H/S” any points. But it has achieved a respectable following, so why wouldn’t they make a sequel? And because the first one did showcase a lot of potential, why wouldn’t I watch the sequel? So I put my copy of “V/H/S 2” in my DVD player (typing that makes me laugh) and begin my viewing. So was it an improvement? Read to find out!

As a tribute to my first review, I won’t use any stills…Although it doesn’t take much to give me an excuse to be lazy…

Plot: A pair of private investigators hunt for a missing College Student, but instead discover a large group of television sets, VCRs and VHS tapes- which they begin to go through. Each tape is the focus of the screen-time, as this is the frame story.

The one thing going for “Tape 49” was that all it had to do is be better than “Tape 51”, the wraparound story for its predecessor. Did it accomplish that? I’m not sure. The characters aren’t very likable, but they’re FAR less obnoxious than the assholes from “Tape 51”. “Tape 49” also was kind enough to at least feel significantly shorter, as it didn’t seem to wear out its welcome. Yet the problem was that it was never scary. Every once in awhile, you’ll see a mysterious figure appear in the background, but it didn’t give me any chills or thrills. I’m not really sure why the filmmakers want us to hate the cast so much, because we should be fearing for them, which is hard to do when they’re intended to be despicable. Director Simon Barrett has potential as a writer, but is a novice director whom I just felt was out wasn’t ready to helm such an important part of the project. At least his writing was competent and it lacked the self fellating bullshit of “You’re Next”. But even “Tape 51” had some standout moments, so while this one isn’t as annoying, it’s just sort of flat in comparison. I felt nothing while watching it.

Plot: Herman (Adam Wingard) is the victim of a nasty car accident that cost him his eye, so scientists implant an experimental, robotic eye which records everything he sees. It seems to work fine, but then he starts seeing ghostly images.

“Phase 1 Clinical Trials” isn’t bad, but I felt like we were missing key parts of the story. It’s suggested that the protagonist might have done something to piss the specters off, but they never elaborate. I’ve heard they were supposed to be victims of the car accident, but unless I missed something (always a possibility), it’s never stated there were casualties. This is where the black comedy elements are introduced, as some of the deadpan reactions to the supernatural are just downright hilarious. When it comes to the scares, “Phase 1 Clinical Trials” does have some solid buildup and decent jumps, but it’s never terrifying. I think part of the problem is that while Adam Wingard showed off his comedic timing as the hero, he never really seems that scared of these occurrences. He acts like being haunted is a nuisance, when he should be pissing his pants. That sort of undermined the scares, but I guess they were good enough. “Phase 1 Clinical Trials” is an adequate horror flick, but is more successful as a comedy.

A RIDE IN THE PARK– (Directed by Eduardo Sánchez and Gregg Hale, written by Jamie Nash, starring Jay Saunders)

Plot: A bike rider (Jay Saunders) goes out for some mountain biking, only to stumble upon a zombie uprising.

If “Phase 1 Clinical Trials” was a horror film that had a strange humorous side, “A Ride in the Park” is a very gory comedy. It’s also a nice comeback for Eduardo Sanchez (“The Blair Witch Project”), as this is the best entry SO FAR. I don’t want to spoil anything, but let me say that “A Ride in the Park” takes something familiar (zombie apocalypse) and gives us…well, a unique perspective on it. It’s thoroughly creative, the gore effects are awesome and it also made me laugh. It’s not scary, but it’s also not really trying to be. Yet it was still intense because once the zombies stumble upon a little girls birthday, we can’t help but wonder how f@cked up “A Ride in the Park” will be. Part of what makes it work as a comedy is how the actors take their roles very seriously. No one acts like they’re in a comedy, but the content itself is very amusing, albeit in a very screwed up kind of way. Example: A zombie tries eating itself, only to realize that undead flesh is disgusting. That makes me laugh. “A Ride in the Park” also deserves credit for offering the most sympathetic protagonist in all of “V/H/S/2”. He’s the only one I could fully root for, which in itself is pretty funny. “A Ride in the Park” was a lot of fun, being different from the others while not betraying the tone (unlike “Tuesday the 17th” from the previous “V/H/S”).

Plot: A News Crew convinces the leader of a cult (Epy Kusnandar) to let them into his sanctuary, where they can investigate their actions while giving him the opportunity to explain his side of things. Unfortunately, they arrive on the worst possible day.

Strangely, this was directed by the guy who gave us “The Raid: Redemption” and “Merantau”, two martial arts movies. Part of me was hoping that this would be a martial arts/horror hybrid, but I guess I was hoping for too much. At first, I wasn’t really liking this segment. It wasn’t really scary or funny, instead opting to be just…strange. It relies on the surreal performances of the cult members, but that finale…damn! When everything goes to hell- which isn’t just a saying this time around- the film takes a bizarre turn and suddenly “Safe Haven” became my favorite of the stories. It’s unpredictable, INSANELY INTENSE and Gareth Evans delivers nonstop incredibly freaky imagery. There was a lot of effort put into framing every chase scene and every scare, so we see just the right amount of the horror, the hand held camera never getting in the way of the action. The black comedy resurfaces and I credit much of its success to Epy Kusnandar’s hammy- but kind of scary- performance as the Father. The acting is what really makes it funny, even though the actions and dialogue ARE NOT INTENDED TO MAKE YOU LAUGH. Yet it felt intentional to me, making “Safe Haven” fun as well as frightening. The final shot was the only time it lost me, as it was more silly than scary- losing the previously established balance. Nevertheless, “Safe Haven” is awesome.

Plot: Jen (Samantha Gracie) is having a party while her parents are gone, but has to fight off the obnoxious antics of her little brother and his friends…and invading aliens…

The majority of my feelings towards most of these shorts have coincided with everyone else’s, but “Slumber Party Alien Abduction” seems to have acquired the most mixed reception. Some like it, others don’t. As is usually the case with these kinds of divisive films, I’m torn down the middle. I have to admit that I enjoyed the first half, where it’s just the siblings and their friends terrorizing each-other. The acting is good and the characters did seem genuine. I don’t know why, but it reminded me of those coming of age movies from the 80’s (like “The Goonies”). It also helps that even if the majority of the screentime is dedicated to them yelling at and pranking each-other, they are fairly likable. I’m glad that the director was able to show that he could tell a good human story. As much as I liked his “Hobo with a Shotgun“, I couldn’t tell whether Eisener was a good director or not based on that. “Slumber Party Alien Abduction” was a step in the right direction for him, even with its flaws.

Things become more complicated once the aliens show up. The camera INCREDIBLY SHAKY, a total contrast to the more expertly framed camerawork of “Safe Haven”. Sometimes this works, heightening the intensity and allowing for some pretty startling visuals. I occasionally shivered in fear and flinched at the jolts. Other times, it’s disorienting but not in the way that helps the movie. It becomes frustrating not being able to tell what exactly is going on and I often had difficulty even being able to tell who was who. I think my biggest complaint though has to be the ending. While it certainly is ballsy, it was the only part in “V/H/S/2” where I felt the tone was completely obliterated. This entire movie has loads of sadistic kills, but they’re always silly enough that you never take them too seriously, while they’re also edgy enough to get under the viewers skin. Yet the final moment of “Slumber Party Alien Abduction” was just mean spirited and it didn’t go well with the rest of the comedy. Maybe if it was a full length feature film, it would’ve worked better because the goofy and depressing moments would’ve been placed farther apart. Nevertheless, when “Slumber Party Alien Abduction” worked, it worked really well. I’d say its my third favorite short.

I had a very positive SUBJECTIVE reaction to “V/H/S/2”. Even the lesser stories had moments where I was chewing my nails in anticipation. But when the horror clicked, this movie was freaking terrifying. Yet it’s the darkly comedic tone that connects all of these stories together and I actually agreed with their placement this time around. I would personally rate this a 3.5/4 stars, but I can’t do so because its OBJECTIVE faults are very noticeable. I still find it odd that digital recordings are so prominent in a movie called “V/H/S/2“. I still find it odd that this ‘found footage’ snuff material has been edited and scored. I don’t know why it’s so difficult for these filmmakers to have a good frame narrative too. I also hope the filmmakers don’t take advice from their big brother, the “Paranormal Activity” franchise and advance the story using baby steps. There are already too many loose ends and unanswered questions, both within the overarching tale and the individual shorts. Are the tapes supposed to be real? If not, that REALLY undermines the terror. But if so, shouldn’t the world have ended like 3 times now? Hopefully “V/H/S/3“, if they choose to make it, will provide some answers. Yet “V/H/S/2” mastered the formula of its predecessor, even being incredibly well paced- a rarity for any anthology. It improved on the scares and the quality of each individual short, while making sure the tone was consistent. It’s funny how my objective beliefs regarding “V/H/S” were more positive than by subjective reaction. I admired it for its creative spin on a tired formula, but didn’t really enjoy myself either. But for “V/H/S/2”, my objective beliefs had to hold back my incredibly positive subjective reaction, making this the total opposite of its predecessor. I liked it that much.

Nudity: There is a pair of breasts and four different sex scenes.

Overall: “V/H/S/2” is a must see for fans of the first one and I’d also recommend detractors give it a look because it’s just that much better.