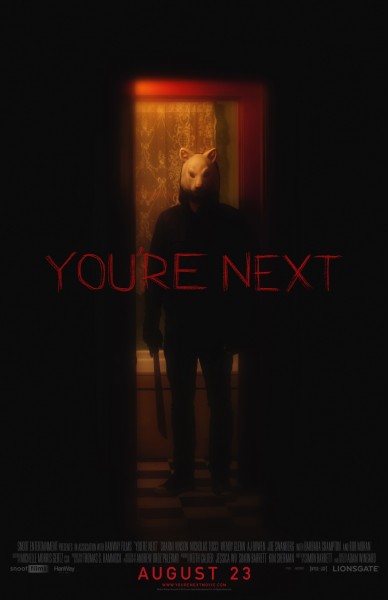 Plot: Masked psychopaths target a family and their significant others in an isolated house during a reunion.

“You’re Next” has been an exhausting experience for me. When I first saw the trailer, I couldn’t decide whether or not I wanted to pursue it during its theatrical run. On one hand, the trailer made it look pretty cool. On the other, I’m not a fan of home invasion movies. Why? I have many reasons, but the most prominent is they’re all way too alike. Slashers might have derivative screenplays, but at least they can be unique with their aesthetics and kills. The only time home invasion flicks tend to stand out is if they’re from France (“Inside“) or are annoyingly meta (“Funny Games“). But the positive reviews for “You’re Next” won me over, so I decided to give it a look. During my viewing, my opinions were constantly at war with each-other. Was I watching a bad movie that happened to have flashes of brilliance? Or a good movie which was making some severe missteps? After it was over, I pondered as to what I had just watched. Then I pondered some more. Then I began to write this review. I did a paragraph, didn’t like it and then deleted it. I tried to write some notes, which I hoped would help sort out my feelings. But they contained nothing of substance. After hours of tearing my imaginary hair out in frustrated contemplation, I came to my conclusion. “You’re Next” just wasn’t worth stressing out over. It’s not a very good movie, in spite of what the critics AND itself seems to think.

Let’s go ahead and break it down by its three act structure.

Act 1: As with every film, the first act introduces our…colorful…cast of characters whom we are…supposed…to fear for. I wasn’t surprised that the family would be dysfunctional. In the world of home invasion movies, you have two types of family dynamics: “Normal” (boring) and “Tumultuous” (annoying). If the former is chosen, it’s because the flick wants to emphasize how this could happen to anyone. If it’s the latter, then the theme shall be how they must become a loving family unit in order to combat this menace. I usually roll my eyes when this one shows up, because it lost its originality years ago, but props to “You’re Next” for actually AVOIDING this trope. The family members are not all on friendly terms with each-other, but uniting doesn’t do much for them and reconciliation is the last thing on their minds. It’s just too bad that in the process, we have to endure one of the most unlikable cast of characters ever to appear in a film like this. Everyone is constantly yelling, bickering, giving dirty looks, talking shit behind peoples backs and never taking any breaks from any of this. I was already praying for the killers to come and give me merciful mayhem soon. But alas, the killers did not answer my prayers. Granted, maybe it’s unreasonable to expect such things when the primary cast had only been introduced like 10 seconds prior…Yeah… 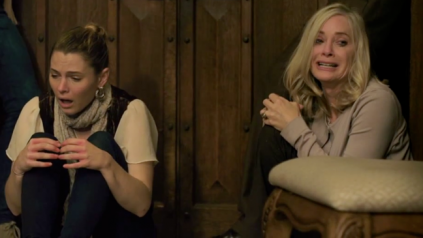 The acting isn’t very good either…I’m not saying everyone does bad all the time. Some of the cast members are even consistently solid, but the ‘off’ moments have the tendency to stick out a lot more. Oddly, one of the worst performances came from cult favorite Barbara Crampton (“Re-Animator“), who provides some unintentionally amusing moments (when she hears a noise). Although whoever played the Father somehow managed to outshine her in the awful department with his stilted line delivery. Everyone else would be acceptable if “You’re Next” was released direct-to-DVD, but the cast just never clicks with the characters or script. Yet it’s only glaring during the first act. Maybe because it’s easy to run around and scream than to deliver dialogue? Yet the direction doesn’t complement the cast very well. The opening kill lacked suspense and the director’s use of hand held camera angles made me too aware of the camera. I understand he was going for a voyeur vibe, but it’s handled amateurishly so it just looks like they are actors being filmed for a movie instead of characters conversing. So yeah…”You’re Next” has a really rough start.

Act 2: At first, I was thrilled when the attacks begin as I figured I’d much rather enjoy watching the characters run from arrows than have to watch them bicker. Unfortunately, being attacked only causes them to become more obnoxious. Seriously, it’s hard to follow what everyone is saying during the big argument which occurs immediately after the first death. But you hear “You’re fat!” and “You were always jealous of me!” being yelled and for no reason, the sister starts shrieking “None of you ever had any faith in me!“. Ugh, shut the fuck up people! You’re so annoying that I forgot to censor myself! One brother explains that the cell phones aren’t working probably due to a device which blocks the signal and what response does he get? “You’re such a lowlife!“. Luckily, amidst all this shit is a nice and shiny marble: Erin (Sharni Vinson). While the family members yell at each-other, do idiotic things which get them killed or put others in danger with their recklessness, Erin- one of the girlfriends- becomes the real protagonist. She’s smart, strong, resourceful and becomes the heroine we WISH horror leads would be. She’s also played by the best actress. I liked this character so much that it elevated the movie to a whole new level. I strongly suspect that it was her who convinced the critics that “You’re Next” was better than it really was. I can’t really blame them. She’s awesome and when she introduces a villain to her hammer, I cheered. 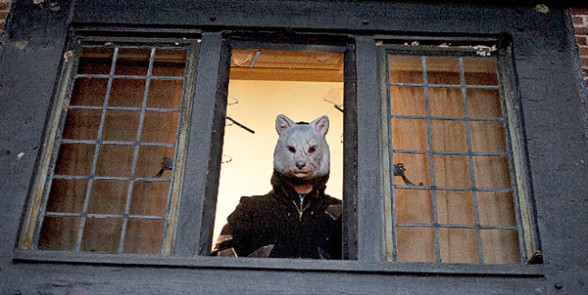 Once things start moving, they start to move rather quickly. The villains, who have admittedly creepy masks (although “The Strangers” has it beat there), never wait too long before attacking someone. Sometimes they themselves are rather clever as to how they will trap their prey. Other times they’re just lucky that the family is painfully stupid. But there’s a lot of intense action, a handful of creepy moments and plenty of suspense. Now, I don’t to oversell any of this. I never found “You’re Next” to be exceptional in the ‘scare’ department. But it gave me enough to enjoy myself. But once again, it’s Erin who made so much of it enjoyable. Her plans, traps and determination even convinced me that I would give “You’re Next” a positive review…

Act 3: So we have a bad first act and a good second act, but the third act is just…bizarre. Early on, the killers don’t appear to have any motive for their carnage. But over time, we learn that their reasons for doing things are more…mundane and typical for your average home invasion thriller. This is fine, but their plans seem unnecessarily overly complicated and a lot of small holes are left in the wake of its revelation. But the twists…did…catch me…off guard. I’m ashamed to admit that I didn’t see a lot of these twists coming. But my issue is that eventually, it becomes difficult to take the villains seriously. Erin becomes too badass for her own good, taking these guys down like chumps. There is even a reverse-stalk sequence where the killer is being hunted by his intended victim! That could be clever…but I just felt it diminished the suspense. Even worse, the tone really starts going wild. The first two thirds of the film are serious and grim, but the third act adds a strange sense of humor which seems so out-of-place. Imagine if “The Strangers” suddenly developed a “Cabin in the Woods“-esque style of comedy during its last 30 minutes. Maybe that’s too strong of a comparison, but the supposedly witty and clever humor just did not click with me. I honestly felt that during the ending, the film just stopped taking itself seriously. I did still laugh when a killer “slipped” though. That was great.

I ultimately decided I didn’t care for “You’re Next” very much. I almost decided that the good and bad were at least enough to cancel each-other out, but the problem is that the movie is too aware of what it does right. It ultimately develops a smugness, which becomes especially apparent during the third act, that I found unappealing. It’s not as painfully self aware as “Funny Games“- both the original and its equally awful remake– but it’s there. The filmmakers deserve credit for playing with the formula, but “You’re Next” isn’t as smart as it thinks it is. If it was, it would have a more consistent tone within its third act. If it was, it would know that we would know that even if there was a purpose to making the entire supporting cast obnoxious, no reasoning would make it any less painful for me to sit through. But still, it seems like the majority of the viewers have made a connection to the movie. Even I have to admit that when it works, it can be pretty awesome. But just thinking about “You’re Next” now gives me headaches because of how much thought I put into it. When you break it down, for all of its inspired ideas, it’s nothing special. It’s just an average home invasion horror flick which sometimes gets it right and sometimes gets it wrong.

Nudity: Some titties and a sex scene.

Overall: “You’re Next” is insanely overrated, but it has its positive attributes which impressed the majority of critics and viewers out there. I’m just not one of them. I’d honestly say it’s a 2-star movie, but I’m going to be a little more harsh because it ended up being more trouble thinking about than it was worth.