(Written by all of the above, Simon Barrett, Nicholas Tecosky and Brad Miska) 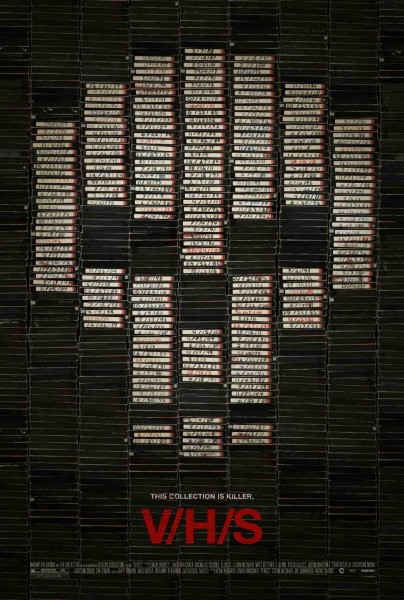 “VHS” is another entry in the found footage subgenre of horror, but it’s not ‘just another entry’ in the found footage subgenre of horror. It was released to polarizing reviews and as someone who can’t decide whether I’m sick of this trend or not, I had no idea how I would respond to this. Now that I’ve seen the film, I still have no idea how to respond to it. I can’t say I liked it, because I couldn’t stand many of its gimmicks and a few of the stories fell flat. But at the same time, I can’t dismiss this either because it can be terrifying and at the absolute least, it is one of the more ambitious examples of its ilk. You’re going to have to accept a few of its quirks, most noticeably its obsession with unsympathetic characters, (intentionally) amateurish camerawork, everyone’s need to film everything, the excessive ambiguity, absurd scenarios and bizarre editing style. Yet even though I understand this, I’m still pulling out my hair, trying to articulate my feelings. Usually I would discuss each story and give my final rating, but “VHS” is above and below my rating system. So let’s go ahead and begin our exploration of this strange, little gem and see if I can make up my damn mind. (Note: I couldn’t find any good stills that reflected the movie, so this review is picture free.)

A group of thugs who make money off of terrorizing people and property on film and then selling the footage are hired to retrieve a VHS tape from an old man’s house. This is one of those implausible premises that becomes even more ridiculous as time goes along. What morons would just go into a house without a clear understanding of what they have to get? Why don’t they just grab the tapes and leave? Instead, they watch them RIGHT NEXT TO A DEAD BODY (they even point out how it reeks). The first thing we see these assholes do is sexually harass some chick on film, so we aren’t supposed to care for them. I could accept this, but I struggled telling any of them apart. It also doesn’t help that they’re morons. The camerawork is so erratic that the terror is diminished because you can’t fucking see anything and it is constantly being spliced in with filler footage (some dude having sex).

This is actually the wrap-around story, so it doesn’t even have a conclusion until the end. Ultimately, the cast will put in a tape and watch it (which comprises of the other five stories), but then they start to vanish. The funny thing about this is it does a decent job at building tension. Something about this house is rather unnerving and occasionally they will see a ghastly figure for a brief moment or will be placed in an uncomfortable situation. But every time the buildup starts working its magic, it will cut away to another story. This ruined “Tape 56“, but also harmed the overall pacing of “VHS“. Every time I started to get interested, it would be like the movie would just start over by beginning the next one. Also, the editing could’ve been smoother as the transitions were a bit sudden. When “Amateur Night” began, I actually thought that these were the same characters, because nothing suggested I was watching a different story unfold and everyone is so indistinguishable. When the ‘twist’ occurs and the horror goes full throttle, “Tape 56” becomes watchable, but there are way too many loose ends and unexplained questions. It’s not the worst segment, but it’s pretty weak and probably would’ve been better if it wasn’t used to show the other ‘films’.

This probably has the strongest script of all the different stories, because it doesn’t rely on gratuitous ambiguity, has a semblance of a character arc and allows the events to flow naturally. That’s not to say it’s great on paper, but it had the most impact on me. Three friends go out for a night of partying and intoxicated, they bring two girls to their hotel room. One of them is…off. The characters are noisy and will test your patience, but they are saints compared to the assholes in “Tape 56“. I have to admit that I was indifferent to “Amateur Night” during the bulk of its running-time, even though it deserves praise for feeling the most ‘authentic’. However, the pay-off is downright terrifying. It’s sexually charged, violent and brutal. The attacks aren’t traditionally gory, but they will have you cringing. Sure, the characters are morons for hiding in the bathroom instead of getting the hell out of dodge. But their plight was scary and by the time it ended, my heart was beating fast. I also liked the design of the ‘creature’, which is unique and very unsettling. The ending might’ve been abrupt, but it was AWESOME. It definitely gave me hope.

A couple are vacationing out west, staying in some shitty motel. At night, someone starts sneaking into their room…For some reason, the characterizations and set-up reminded me of “Paranormal Activity“, down to the ‘horror begins at night’ approach. I thought the acting was strong and the characters were reasonably interesting, but it is a little boring. In the films defense, “Tape 56” deserves the blame for that. After “Tape 56” starts to feel like its going somewhere, it suddenly jumps to this slow burn tale that’s more about character interactions than fear. “Second Honeymoon” in itself can’t be faulted for its placement, especially as it does a decent job building suspense. During the first ‘scary sequence’ (there are two), the camerawork is very clever and the creepy level is high. However, the second isn’t as impressive and the abrupt ending ruined “Second Honeymoon“. The whole point of slow burn suspense is to build up to something great, but since the pay-off was limp, it caused a ripple effect throughout the rest of the movie, making it seem worse than it really was. Take note, filmmakers of the future. If you wish to utilize this style of film-making, made sure your finale hits HARD. Ti West, the guy who gave us “House of the Devil” and “The InnKeepers” (both of which had impressive endings), should’ve known this better than anyone.

Yay, a slasher! No, it sucks! “Tuesday the Seventeenth” might have an amusing title and I’m always a sucker for ‘killer in the woods’ scenarios, but make no mistake, it’s a sloppily written, annoyingly filmed and poorly acted piece of shit. Four friends travel into the woods for some sex and drugs, but find themselves being stalked by a killer who isn’t being picked up by the camera. One of the friends clearly knows more than she’s letting on, but what is going on? No, seriously, wtf is going on! Apparently the director explains many unanswered questions on the commentary, but shouldn’t the majority of the plot be IN THE MOVIE!? NOT AS A DVD EXTRA?! It’s a fucking slasher! It’s not supposed to be this confusing! The characters are annoying and the acting is all over the place. The main girl oversells her performance and the dialogue just felt phony. The weird ‘tracking error’ effect was creative, but it wasn’t very frightening. The kills are decent, but the tone just never clicked. Honestly, I felt like I was watching some sort of parody, except the movie forgot to have actual comedy. Nothing about it clicks and it doesn’t gel with the other stories. We see sudden clips of dead bodies spliced throughout the story, but the characters don’t seem to notice this. Isn’t the point of found footage to show us something from someone’s POV? You suck, “Tuesday the Seventeenth“. All you’ve done was make “Tape 56” look good!

THE SICK THING THAT HAPPENED TO EMILY WHEN SHE WAS YOUNGER (Directed by Joe Swanberg, written by Simon Barrett, starring Helen Rogers):

Eh, it was better than the previous two entries. Actually, “The Sick Thing That Happened to Emily Fuck Me I Hate This Title” probably doesn’t belong in a movie called “V/H/S” because it’s not shot on VHS…The story follows a couple in a long distance relationship, who chat regularly using their web cams. It’s told from the boyfriends POV, so we see his girl in a larger screen and him in the bottom corner. It appears her apartment is haunted. “The Sick Thing” provides some really good jump scares and Helen Rogers was sooooo cute and charming that you’ll just want to hug her. I also felt the web-cam angle was used to maximum effect. However, nobody acts like real human beings. Both seem to take the haunting in stride and the girls bizarre behavior struck me as unrealistic. Much of this is explained, but I didn’t like how it used the exposition. I will admit that I didn’t see the ending coming, but it’s explained so quickly that I had to check online to see what really went down. Still, it made he flinch a few times, so that’s something.

“10/31/98” rivals “Amateur Night” for the best segment of “VHS“. It’s about a group of indistinguishable friends (you’ll only recognize them by their costumes) going to a Halloween party, but show up at the wrong place and stumble upon something terrible. Once again, the camerawork is shaky, the characters are loud and there are many unanswered questions. However, these aspects aren’t detrimental to the film. I didn’t feel that everything needed to be explained. Either a group of religious fanatics are trying to kill a girl who is being possessed by a demon or cultists are sacrificing a girl to a demon. The characters turn out to be surprisingly heroic and I started to root for them as they got involved with the story. The camerawork actually magnifies the tension and everything seems perfectly framed. Imagine the scary parts of the “Paranormal Activity” franchise (and more!) rolled up in a nicely paced, short, exciting horror story. It didn’t scare me as much as “Amateur Night” did, but it was more entertaining. I didn’t quite understand why they went into the house though. Maybe I need to watch it again.

So that’s “VHS“. It contains two good films (“Amateur Night“, “10/31/98“), two bad films (“Tape 56“, “Tuesday the Seventeenth“) and two films that are somewhere in between (“Second Honeymoon“, “The Sick Thing That Happened to Emily When She was Younger“). I didn’t agree with the placement of these films, nor did I like how these stories were spliced together. Yet I’ve chosen to see “V/H/S” as an experiment. It tried something new with this tired subgenre and I feel it deserves credit for being unique. It’s an uneven mess and “V/H/S” does come awfully close to being a failed experiment, but I believe fans of found footage should give it a look. It shows you can do something more than the bare minimum and that alone makes me excited for the upcoming sequel, “S-VHS“, which is apparently superior. But more importantly, even though there are moments where I wanted to punch this movie in its smug face, it provided some legitimate chills. I’d sum up my feelings towards “V/H/S” as “I both love and hate it”, but I shall always remember it. I liked it on a 2/4 star level (wildly uneven), but I’m going to be more generous with the rating out of a grudging respect.

Violence: Rated R. It can be pretty gruesome.

Nudity: Quite a bit, but not all of it is pleasant.

Overall: I’d recommend “V/H/S” for fans of ‘found footage’, but don’t necessarily expect to like it. I think it’s important, but the uneven segments and gimmicks might turn you against it.