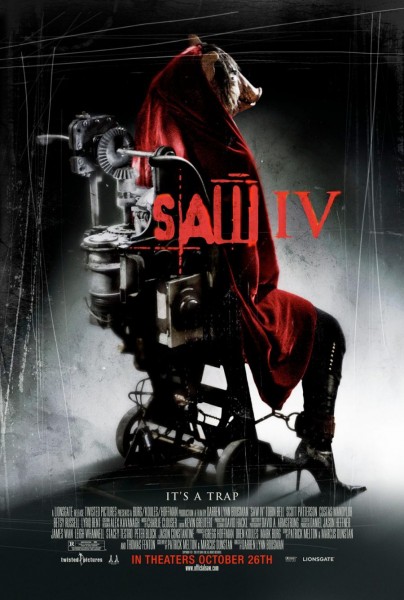 Plot: Lt. Riggs (Lyriq Bent) feels the need to save everyone, which seems to be impossible when your colleagues are becoming Jigsaws latest victims. Jigsaw is a serial killer who places his targets in elaborate traps where they either learn a lesson or die horribly, but he’s noticed how Riggs’ work has had a negative impact on his life. Now after being a minor character in the first three films, Riggs gets to know what it’s like being the protagonist…which is never a good thing in this franchise.

While I liked “Saw 3“, it cemented the formula that would eventually ruin this franchise. When “Saw 4” was released, the audiences flocked to the theaters, but left feeling underwhelmed. At the time, it was agreed that they had just experienced the weakest entry…and then “Saw 5” would come out and everyone suddenly felt a little more sympathetic to its predecessor and two sequels of debatable quality later, “Saw 4” is …Erm….Which one is “Saw 4” again? The first three flicks are held in high regard amongst fans, “Saw 5” has the reputation for being the worst, “Saw 6” is noted for its improvement over “Saw 5” and “Saw 3D” gets to boast being the last. “Saw 4” isn’t good or bad enough to stand out, nor is it accompanied by a noticeable reputation, so it falls through the cracks. I remember thinking that it was okay, inferior to its predecessors but superior to its followers. But now that I’ve revisited the earlier “Saw” flicks, I feel I might’ve been a bit too generous. “Saw IV” is reasonably entertaining if you just want to see people die in cruel ways, but by now everything that made the previous entries unique has become clichéd and this movie doesn’t want to take any risks…Although it does do a good job at convolution the narrative…

“Saw 4” returns to its “Saw 2” roots by focusing primarily on the graphic violence. Once again, most of the films efforts were put in the creative trap designs and the gore effects. I’m not criticizing this decision, but if you want psychological tension or an engaging story, you might be disappointed. As a lover of splatter, I was content with “Saw 4“‘s priorities, even if it missed plenty of opportunities in the process. It helps that I still found the kills to be very cringe inducing, which is a necessity in ‘torture horror’. Darren Lynn Bousman is just going through the motions as the director though, recycling every visual idea from his previous forays into the franchise- which in some cases, were lifted from James Wan. You have the same kind of lighting, camera angles, music cues and those hyperactive quick cut edits which have become synonymous with the franchise. Unfortunately, the transitions have become downright confusing. A girl gets knocked into a door, which opens and reveals another character, but he’s in another location. You’ll quickly figure out that Bousman is just being cute with the transitional effects, but I thought it was distracting.Is there suspense? Sure. Bousman is a competent director, if anything, so he doesn’t really botch the minimal requirements. The kills themselves are so grisly that it’s hard not to feel anything, but “Saw 4” failed to get its hooks into my pectoral muscles like its predecessors did. There is some tension, but those movies had more tension. But while it underwhelmed in comparison to “Saw“, “Saw 2” and “Saw 3“, it did benefit from an incredibly fast pace. “Saw 4” might not be incredibly exciting or memorable, but it did keep me thoroughly entertained. 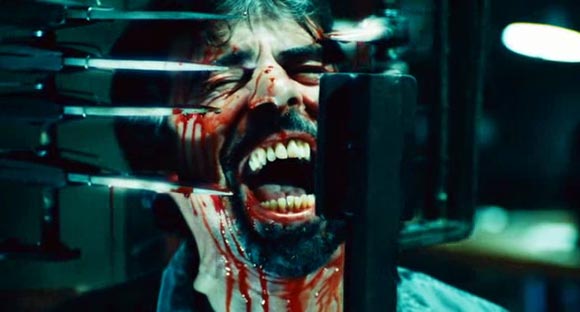 As for the story, “Saw 4” is kind of a mess. The Riggs story-thread is fun, but I felt it could’ve gone deeper. They bring up the possibility that Riggs might be pushed into becoming the next Jigsaw, which is ironic because he’s more of a heroic character than previous protagonists, but it never goes beyond the surface level. It’s mentioned and promptly forgotten…Speaking of which, the whole thing with his wife was a loose end…Riggs himself is kind of a flat character who becomes more frustrating as time goes along, although Lyriq Bent plays him well. Story B involves Agent Strahm (Scott Patterson) bullying everyone he encounters, primarily Jigsaw’s ex. These scenes were confusing because Jigsaw’s alleged ‘morality’ is dashed into pieces since he’s going out of his way to attack agents who aren’t part of his ‘learn your lesson or die’ program. Yet the flashbacks suggest that we’re supposed to sympathize with Jigsaw for his tragic backstory and I noticed that his primary victims were much more monstrous this time around- as if we’re supposed to be rooting for their bloody deaths. It’s hard to feel bad for him though when he seems to be targeting cops for shits and giggles. Admittedly it’s possible that his ‘apprentice’ was the real culprit, but I don’t recall if that’s explained in later sequels and I’m not reviewing later sequels right now. That’s another issue I have with this franchise. For every question answered, five more pop up and it makes it difficult keeping track of all of this information. But the main problem with “Saw 4” is actually the ending, which until this point had been the high points of this series. The final moments of “Saw” and the following two sequels were very chilling and startling, but by “Saw 4“, we know what’s going to happen. What was once fresh and bold had now become stale and safe. I hated how they resolved the stories of two previous protagonists, which felt like a kick to the nuts for anyone who were invested in those characters. The manipulation of the timeline was pretty stupid as well. I won’t spoil what happens, but the true big ‘reveal’ left me feeling confused instead of intrigued. Instead of crying “holy shit!“, my reaction was more akin to “huh?“. But that big reveal distracts you from the many contradictions, loose ends, stupid character decisions and plot holes- even the ones which accompany it. If anything, you’ll be too busy trying to reconcile certain events with the revelation. It’s not even a very good twist considering it doesn’t effect the plot in the slightest, creates continuity errors and isn’t properly foreshadowed. But because it’s such a ‘shocking swerve’, it might con you into thinking it’s smart.

There are some traditional weaknesses as well. The arc words were too on the nose, which is reinforced by having two separate characters state them. Isn’t there a more subtle way to say “You can’t save everyone“? Even “Saw 6” and its commentary on health care isn’t so blunt. The flashbacks to Jigsaw’s past weren’t necessary, but Tobin Bell’s acting is so damn good that I found myself not caring. But the person doing the flashbacking was Jill (Betsy Russell), who wasn’t present for Jigsaw’s early murderous exploits. I also found the twist involving the revelation of Jigsaw’s second apprentice to be laughably predictable. “Saw 4” was written relatively quickly as it was released only a year after the previous one and the writers do deserve credit for trying to at least maintain a facade of intelligence. The twists range from dumb to predictable to confusing, but I did feel they tried to continue the formula in a way that would satisfy the fans. I can’t bring myself to hate the script, knowing the challenges that the filmmakers faced. The studios should’ve spent more time on every Saw flick instead of churning them out so quickly. Maybe if a few more months were added to the writing phase, the script flaws would’ve been ironed out. But the producers didn’t need to deliver a smart script, they needed to deliver a script that seemed smart as long as you didn’t think about it…Which most fans- including myself- did because our attention was mostly on the gore, traps and that final reveal. “Saw IV” is really, really, really, really, stup- aw shit, a chick just got her scalp torn off! Sweet! The critic in me doesn’t like the script, but the gore hound in me enjoyed the grotesque spectacle on display. Yet above everything, the previously innovative formula had become stale by this point. The studios might ask: “Why tamper with success?“. I might answer: “Because when we realize that we’ve been watching the same movie over and over again, we will stop being your target audience“. Unfortunately, they didn’t heed any of our warnings and after this, Jigsaw’s box office draw began to dwindle. Three sequels later, the franchise reached its expiration date and was replaced by “Paranormal Activity“…which made THESE EXACT SAME MISTAKES. But the studio system will never learn…

Overall: “Saw 4” is for fans of the previous flicks who are content with the death traps alone, but it’s pretty average as ‘torture horror’.