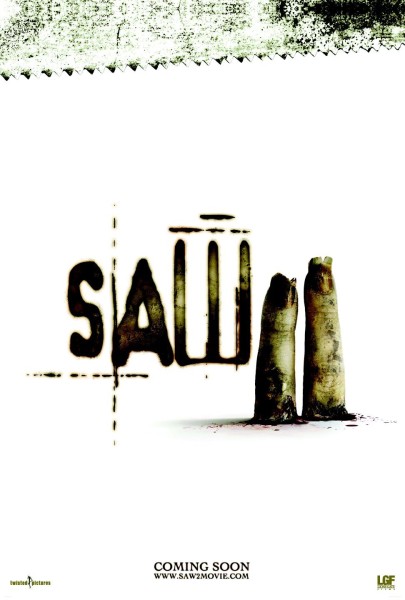 Plot: The notorious serial killer known as Jigsaw (Tobin Bell) has been caught by a corrupt police detective named Eric Matthews (Donnie Wahlberg). But unfortunately, that was all part of Jigsaw’s plan. You see, he had kidnapped Matthews’ son and placed him in a house filled twisted traps and other potential victims. Can the detective find his son and redeem himself before it’s too late?

A successful film will spawn a sequel, but a successful sequel is what gives birth to a franchise. When you look at the majority of franchises, it’s almost universally agreed that the first is always the best. Yet it’s usually one of the sequels which masters the formula that subsequent entries would follow. “Friday the 13th” might be superior to “Friday the 13th Part 2” and “Friday the 13th Part 3“, but it’s those films which would become the most prolific. It would be “A Nightmare on Elm Street Part 3: Dream Warriors” and “Halloween II” that those franchises would emulate, not their superior predecessors. In 2004, James Wan and Leigh Whannell would help form a trend known as ‘torture porn’ with the release of the highly popular “Saw“. But when you really look at the movie, it’s more psychological than visceral. The traps were low key, the violence was mostly off-screen and the majority of the screen-time was dedicated to its leads trying to figure out what was going on. Its success lead to “Saw 2“, which is the kind of movie you would have expected the first one to be. Due to the larger budgets, the traps are more outlandish, the kills are more explicit and the cynicism is more extreme. It created a formula that didn’t rely on quality, which made it easier to imitate. Subsequent sequels and clones would use “Saw 2” as the template. Whereas “Hostel 2“‘s under-performance sabotaged any chance of “Hostel” becoming a successful franchise, “Saw 2” was successful enough to spawn five more sequels. So it was an important horror flick for its time, but does that make it any good? It certainly is not the powerhouse thriller that its predecessor was, but it is an intense and entertaining splatter flick..

The first “Saw” was very psychological in its approach, focusing on its two protagonists have mental breakdowns as they try to figure out why and how they got there, as well as how do they escape. “Saw 2” aims for violent entertainment, which is enough to satisfy my sadistic urges. There are two different stories going on at once, even though I thought they tied in to each-other rather nicely. The first is the struggle between Detective Matthews (Donnie Wahlberg) and Jigsaw (Tobin Bell). Matthews is in my opinion, the best of the “Saw” protagonists. There is a lot to that character beyond the reasoning as to why Jigsaw is interested in him. On one hand, he’s an asshole who might have once been an honest cop, but now he has the tendency to frame suspects, use violence liberally and cheat on his wife. On the other hand, the people he targeted were apparently guilty and he genuinely does care for his son. In a way, he reminded me of the protagonist from “Hellraiser 5” in that he might not be a good person, but he’s likable enough to where you want him to redeem himself. But I also thought he was interesting and he made a worthy nemesis for Jigsaw. Donnie Wahlberg NAILED the role, being able to showcase many different emotions while not going too over-the-top. Yet make no mistake, this is really Tobin Bell’s movie. In the first film, the identity of Jigsaw is part of the mystery and when he actually appeared, he either wore masks or used a puppet to stand in for him. Here, he’s shown in full view within the first 10 minutes. I still find myself wondering why no one calls him out on his hypocrisy. Two cops are shown being killed during the raid due to his traps and surely he wouldn’t know whether or not they deserved to die. Those are holes in his logic which no one seems to want to use against him. But Tobin Bell is creepy as hell, primarily because he acts like a normal dude with some disturbing insights. We get to learn more about Jigsaw, but not to the point where we feel we’re learning too much. The interactions between the ‘hero’ and ‘villain’- I use those terms knowing that Mathews isn’t a conventional hero, nor is Jigsaw a conventional villain- are captivating due to the actors’ performances. 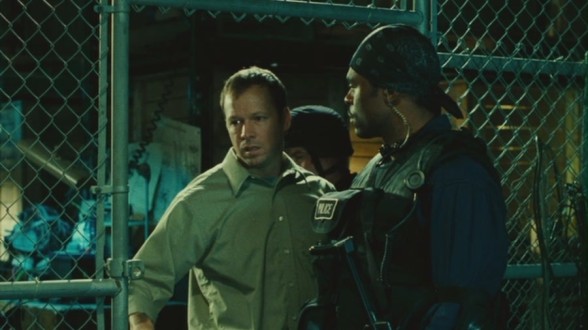 The second story focuses on a group of people who wake up in a mysterious house. They immediately discover that they are breathing in poison which will kill them in two hours, but the house has been rigged to keep them trapped for three hours. To survive, they must participate in their own deadly games. This allows the movie a lot of room to provide ambitious, gruesome traps, which will mutilate and kill the cast. Actually, even though the trap designs are crazier than what we got in “Saw“, they’re still grounded in reality compared to what we would get in subsequent movies. I was also surprised that the gore wasn’t as extreme as what would become the norm. Don’t get me wrong, this movie doesn’t shy away in the violence department, but the kills still rely a little bit more on their psychological impact than actual gore effects. One scene has a character being thrown into a pit full of dirty syringes. The camera makes sure to show various needles piercing her skin and it is very cringe inducing, but there isn’t a lot of blood. Another scene has a character getting their hands caught in a device which slices their wrists when they try to get out of it. My favorite has to be the furnace, which is INCREDIBLY hard to watch. It’s not as graphic as a similar death in “Saw 3-D“, but the actors expressions make it hurt that much more. The acting is MUCH better than what we got in the first movie. The downside is that the majority of the characters are not very likable. They range from marginally intriguing (but underused) to boring to incredibly obnoxious. Xavier (Frankie G) has to be the most retarded character to ever appear in a “Saw” flick. I understand that some characters are intended to be unlikable, but having them be so incredibly hostile ALL the time to the point where they constantly do idiotic decisions just to drive the story starts to reflect negatively on the movie.

Overall: If you liked “Saw“, then watch “Saw II“! It’s a worthy followup.