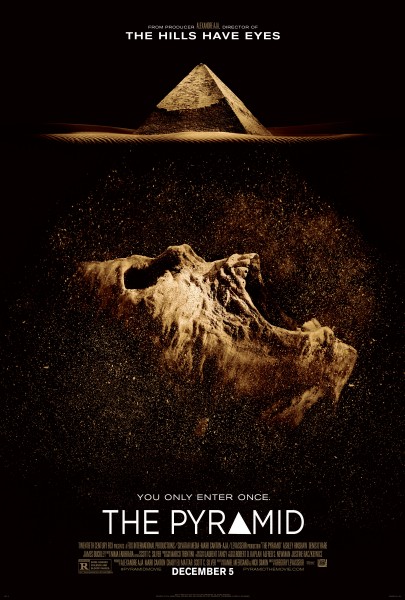 Plot: A documentary crew follows a Father-and-Daughter team of archaeologists into an unexplored pyramid, which contains an unspeakable evil…A HORRIBLE MOVIE! EEEEEEEEK!

When I first heard about “The Pyramid“, the snarky side of me made some mental comment about having already seen it when I watched “As Above, So Below“- that catacombs horror flick with the awful title. However, I also can’t deny that the premise alone intrigued me. Pyramids are very mysterious, creepy and they provide a handful of storytelling possibilities that make it a natural fit for the genre. But as the release date crept up, the marketing campaign seemed to be non-existent. No trailers played in any of the theaters I went to, no TV spots, no early reviews or anything to suggest that “The Pyramid” truly existed outside of my head. Then spooky stories about how this was filmed a couple of years ago, but had sat in movie limbo because no one had any faith in it, began to make me nervous. Beginning to panic, I immediately hunted for the trailer online and was…thoroughly underwhelmed. I was distracted by the signs that I was going to be in for another found footage feature, which only helped reinforce the “As Above, So Below” comparisons, but even that was unclear. The camera seemed too steady and clean. This was looking to be a terrifying experience, but not in the way I would’ve wanted it to be. “The Pyramid” was just beginning to look like it was going to be a piece of shit, which I might as well retype in caps because that dread was magnified when I realized I would have to wake up TWO HOURS early in order to watch it. But I did because…I am a small insignificant douchebag who has to see anything horror related…*Sigh*…”The Pyramid” kind of sucks because it’s lazy, stupid and really stupid, but at least it’s not another paranormal themed found footage film. So…yay?

Going in, I wasn’t sure if “The Pyramid” was found footage. Luckily, I didn’t feel silly because the movie itself wasn’t sure either. For the most part, it is structured like one, with the majority of the content being filmed through the various cameras that the characters have taken with them. But I started to get confused when various shots were captured from an objective POV, which obviously couldn’t be from any of their cameras. Derp. If laziness has ever been an artform, Grégory Levasseur might be breaking new ground. “Cannibal Holocaust” and “Behind the Mask: The Rise of Leslie Vernon” might’ve broken the fourth wall, but that was part of their stories and even “District 9“‘s questionable use of the format could be justified by the context. “The Pyramid” only stops the first person POV as soon as it becomes inconvenient for random shots, because apparently we need to see the back of the rover so that we can be reminded that it is a rover…entering a pyramid. Maybe the monster somehow acquired a camcorder and was spying on the cast with it. Ugh. I will concede that at the absolute least, I never found myself becoming disoriented or nauseous. The camerawork isn’t shaky at all and the editing was pretty crisp. There is also a good reason for the characters to use the camera (the light). While I’m on the positives, I will praise “The Pyramid” for excelling in the set and sound design. I was concerned that this unique location would resemble normal caverns, but you never forget that this is a pyramid. The traps were pretty cool too. I am naturally claustrophobic, so I did feel some unease. The various sounds, screams and roars that could be heard in the background also managed to get under my skin. Some of the jump scares successfully put a jolt in me, even if they were admittedly cheap. Finally, “The Pyramid” is short and fast paced, so I never was bored. Even good examples of found footage tend to be slow, so while this wasn’t as rewarding, it wasn’t tedious either.

Unfortunately, while the strengths are pleasantly solid, the weaknesses are…almost hilarious in their awfulness. The characters suck on every level. Are we sure that the original plot wasn’t about ‘a group of mentally challenged adults who accidentally stumble into a pyramid’? Because these people are unbelievably stupid. Throughout my viewing, I kept becoming annoyed with how loudly they would speak even though they know something is hunting them. They aren’t just using normal voices either, they’re really turning up the volume as if they’re trying to attract attention. Ashley Hinshaw (Nora) and Denis O’Hare (Holden) are among the better actors, but they are the ones who keep reading the markings out LOUD, so it’s hard not to face palm when they start delivering exposition. I don’t even think we needed all this information anyway, as unlike “As Above, So Below“, there is no audience interaction with the story. You won’t be solving any puzzles or piecing together any mysteries. You’ll just have to listen and nod your head. James Buckley (Fitzie) kept screwing up the tone with his comedic antics, even after people start dying. Yet he somehow becomes the voice of reason whenever the archaeologists start LOUDLY translating the symbols, reminding them that this is no time for a history lesson. Sunni (Christa Nicola) starts freaking out at Holden for taking them down there, even though Holden was the ONE person who was against it in the first place. You hate this character because she was the one who suggested they enter the forbidden tunnel, while Nora and her boyfriend were responsible for going into the pyramid themselves. They try to justify her behavior, but it still annoyed me. Sunni is also played by the worst actress of the group, whom I could swear was trying not to crack up half of the time. Zahir (Amir K) got on my nerves just because he acts like such an asshole towards Holden, HIS GIRLFRIENDS FATHER. I don’t understand why horror filmmakers seem to want to make us hate the people whom we are supposed to fear for. The acting is mostly acceptable, but unexceptional. The only stand out performance came from Christa Nicola, only because it was so bad.

The script is unfocused and full of holes. How come blades and flares do more damage to the monster than bullets? I can accept that some possibly missed, but how is that possible with such a narrow tunnel? In fact, how could such a larger creature get through a tunnel that the humans could barely fit through? How did the soldier get there? It’s implied there is only ‘one way out’ and by implied, I mean the characters keep saying ‘there is only one way out’, but are we supposed to presume the soldier crawled down that ancient looking ladder (which holds A LOT of weight for some reason), ignored the corpses, evaded the monster, traps and all sorts of crazy shit to find them? On another note, what was the point of that toxic air? That subplot literally does not lead anywhere. Yet so much time is spent on it. Apparently being chased by a big, super strong monster isn’t suspenseful enough, so they have to throw in an infection? Does anyone go crazy from it? Die from it? Mutate? Nope, it’s just there. In fact, so much of this movie feels like camouflaged padding. The debate between old fashioned and technology driven archaeology? Doesn’t lead to anything. The gate, which contains a warning inscription that’s supposed to scare the audience while adding to the reluctance of the characters? Apparently pointless, as it’s not like they inadvertently freed the menace as its feces were around and it certainly did not sneak around the characters to attack the straggler. All that nonsense history? It amounts to little as the majority of this information only loosely ties into what is going on. This is bad writing, yet TWO people developed this screenplay. Yikes.

At least the writing diverted some of the heat from the direction, which is also pretty bad, but not THAT bad. To be fair, director Levasseur isn’t devoid of talent. I’ve already complimented the majority of the films strengths and there were some genuinely alluring shots- even if they do break that damn fourth wall. I don’t want to go so far as to say he is devoid of talent, but I personally suspect he either lacked the time or resources to fully realize his vision. The special effects are especially uneven, sometimes being okay, but mostly being weak. Those cat things were hard to take seriously and the primary monster…It looked acceptable from a distance, but as the camera got closer and the lighting got brighter, we begin to see how phony this beast looks. Sometimes subpar CGI brings it to life, other times it’s bad makeup effects and I think they used a puppet during the ‘ladder’ scene at one point. Various shots are simply…bad. They enhance the dodgy effects make everything look staged. There were times I felt like I was watching actors on a set, not characters in a pyramid, because of poor camera angles. The worst visual has to be when someone is attacked from behind- too telegraphed and aesthetically awkward. Have I mentioned the unintentionally amusing parts? Well, I have now! Sometimes the writing, directing and acting work together to provide an accidentally hilarious moment, which provided more laughs than the intentional comedy.  When “The Pyramid” fails, it fails “The Legend of Hercules” style. Sometimes it’s funny and if I ever bother watching it again, it will probably involve my friends and alcohol. But even though it is mostly to be enjoyed on an ironic level, I have to admit that I prefer this to most found footage films. “Paranormal Activity 4” might be technically superior, but it’s so damn boring. I can’t bring myself to give “The Pyramid” a passing grade though because it did squander a lot of potential and while I can enjoy shithouse cinema, I prefer my bad movies to be more ludicrously inept than outright lazy. “The Pyramid” is pretty inept, but it is INCREDIBLY lazy, so I struggle with forgiving it.

Nudity: None, but you do see a girl start to get undressed.

Overall: “The Pyramid” is pretty bad, but might provide a laugh or two on the small screen.