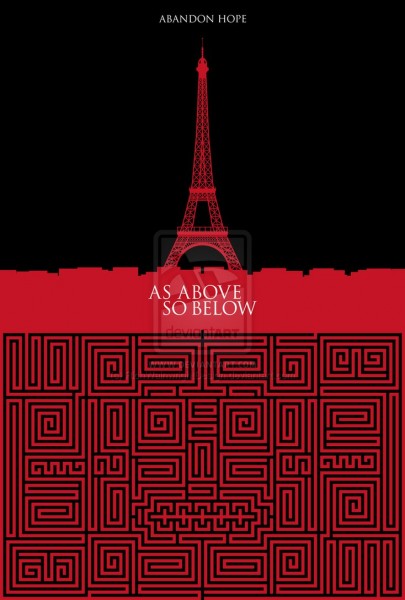 Plot: Scarlett (Perdita Weeks) gathers a group of filmmakers, explorers and experts to search virgin, underground tunnels which she hopes contains the mythical philosophers stone. Unfortunately, she might have to literally pass through hell in order to get there.

“As Above, So Below” might have one of the blandest, vaguest and most forgettable titles ever conceived by man, but I actually thought this looked pretty cool. The trailers impressed me, the premise was unique, the locations were ripe with potential and even the found footage element seemed to work within this context. Of course, this excitement only meant that I would be disappointed…and I was…But I will concede that “As Above, So Below” actually tries to break new ground. It tries to produce a strong story, complete with twists, themes and character arcs. It borrows conventions from other genres, primarily action/adventure, so expect to be reminded of the Indiana Jones franchise at times. While I would not call the movie original, it doesn’t necessarily coast off the clichés established by its predecessors. At times it will even acknowledge them before knowingly tip-toeing around our expectations, giving the film an aura of unpredictability. Considering how ‘found footage’ films are often so alike that it becomes difficult to tell which is which, “As Above, So Below” sounds like a breath of fresh air. So…what went wrong? The problem is that ‘trying’ is not the same thing as ‘being good’.

Is “As Above, So Below” scary? It has its moments. A few of the jump scares did give me a nasty jolt, but they also provided some of the more unintentionally funny moments. I totally lost it when they started re-using that bit where the protagonist punches a zombie. The director had previously helmed “Devil“, which also had its fair share of accidental comedy, so maybe he wants some camp value to his flick…Or he just takes silly things too seriously. There is a decent amount of atmosphere, but I attribute that to the locations over anything the director did. The catacombs are creepy and while the lighting definitely helped add to our unease, the erratic camerawork did not. This becomes more aggravating during the finale, where everything is moving so fast that it’s nearly impossible to keep track of what is going on. A better director would’ve kept the camera still and not cut away until a haunting image had burned itself into our minds. I would’ve presumed the director would be above this, as these flaws weren’t apparent in “Quarantine“, his previous found footage flick. But maybe that was because he had been so busy copying every shot from “[Rec]”, which happened to have chilling visuals despite the fast paced finale.So I suppose you can say the director was…below…these flaws. Har! Har! Har! The sound design definitely deserves a lot of praise though, as the back-ground noise often did get under my skin when the visuals were failing to do so. Those random screams just got to me. Even though I teased his skills earlier, I don’t think Dowdle is a bad director. He’s perfectly adequate and never lost my attention. “As Above, So Below” is briskly paced and while I wouldn’t call it terrifying, it wasn’t necessarily a stranger to spookiness. I did feel the Dowdle brothers ripped off “The Descent” a bit too much, with the blood pond and that big moment where someone gets stuck. In the case of the latter though, the lack of originality is redeemed by the addition of bones. Being forced to crawl through a tunnel that you don’t fit in is bad enough, but moving through human remains in the process? That’s just twisted- in an awesome kind of way. Sometimes spicing up old ideas can be more effective than dreaming up new ones. “As Above, So Below” does have a lot of fun preying on claustrophic people such as myself, but I never felt the need to flee the theater either, which I think is the perfect balance. 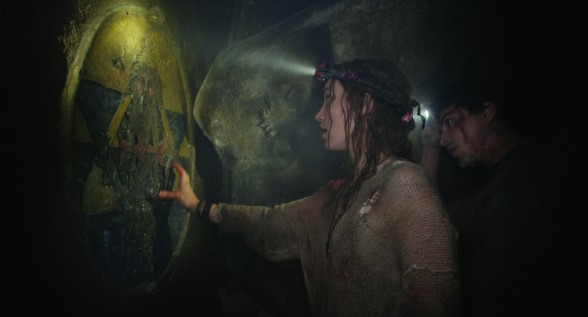 I thought the philosopher stone angle was pretty intriguing and found myself trying to solve the riddles along with the characters, which shows I was invested in the story to a certain extent. Despite a strong set up though, eventually the characters start speaking too quickly because they are obviously in a hurry and I started to have trouble keeping up with them. Furthermore, there are a lot of unanswered questions. I’m perfectly fine with ambiguity, but the forces of darkness seem to have a certain amount of power outside of the caves…Characters start encountering the paranormal long before they even learn that what they’re searching for might be in the catacombs. An alternate interpretation of this movie is that they are going insane, but the video footage is picking up all of these visions and yet apparently they never looked at what they filmed. This is practically a plot hole, as they use the footage from the opening scene in order to read some markings, but never take note of the hanged man. “As Above, So Below” can be argued as a spiritual sequel to “Devil” because it has the same themes of the past haunting the present. But “Devil” explained that there was no coincidences and they were all intended to be at that place at that time. “As Above, So Below” offers no such information, so the fact that ‘hell’ has been trailing them before they even get there seems like a cheap way to provide earlier scares- while also undermining the fear we’re supposed to experience when they officially reach the gates of hell. The back-stories of our characters tie directly into what is going on, but the character arcs are rushed and the characters fail to make an emotional connection to the audience. “Devil” did this much more effectively because you feel like the characters have grown when they start revealing their haunted pasts. It meant something. Here, I felt more like the characters were only admitting to their sins so they could escape. I couldn’t bring myself to care because these revelations were so rushed. When one character reveals their ‘sins’, he explains why they’re being hunted by a mysterious ghost chick who has been following them since before they reach the caves. It is possible that during the earlier scenes, they were seeing the ‘real’ girl, but why was she harassing a separate character? The writers want these characters to be more than just victim fodder, but their development was too choppily written. But at least the order of deaths usually surprised me and the acting was good. In the end, despite cleverly maneuvering around our expectations, “As Above, So Below” just underwhelmed me. While it might be a little different, the script was a bit too clumsy and the scares were a bit too ineffective. I’d say “As Above, So Below” is more mediocre than bad, but I’m probably not going to remember it a week from now.

Violence: Rated R. There was one really grisly attack. Otherwise, the film is more psychological.

Overall: “As Above, So Below” gets my blessing for trying to be something more than just a cash-grab, but that doesn’t make it a good movie.