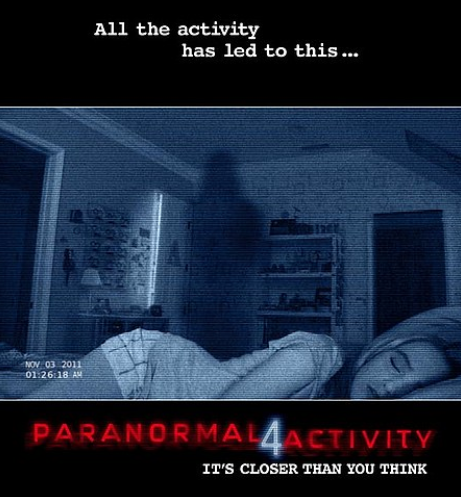 Plot: Alex (Kathryn Newton) is a normal high school girl, whose life goes to hell when her family is forced to take care of the incredibly creepy Robbie (Brady Allen). But something evil has followed him into the home.

The “Paranormal Activity” franchise has been progressively building a stairway that descends into bad filmmaking. Ha, did you see what I did there? I described how each movie was a step down from the last in an incredibly creative way! Man, I am soooo witty. I loved “Paranormal Activity”, but I can see why it has legions of detractors. Horror classics like “The Shining” and “Alien” don’t have to creep you out to be effective. They can rely on set design, cinematography, acting and even the story to carry themselves. But “Paranormal Activity” only works if it gets under your skin. Subsequent sequels became less about mood and more about jump scares, which I guess worked to an extent. “Paranormal Activity 2” used them well, but this formula has become rather stale. If the series was trying to cross a desert, “Paranormal Activity 3” would be the point where heavily panting, desperately gasping for water. “Paranormal Activity 4” collapses from exhaustion. It considers pulling itself to its feet, but instead just closes its eyes, waiting to be enveloped by darkness. So yeah…I guess I’m saying that this is not a very good movie.

By this point, the “found footage” brand of horror has become redundant. It’s like sinking your teeth into your favorite kind of bread, only to discover it’s a little stale. It’s still edible, but the snack has become joyless. But what surprised me the most is how uninspired these scares are. Even the “eh” previous entry provided some memorable moments, like when all of the furniture suddenly drops from the ceiling. What does “Paranormal Activity 4” have? An old woman appears in front of the camera…TERRIFYING! What about suspense. “Paranormal Activity 3” had the fan-cam, which built it fairly nicely. “Paranormal Activity 4” uses the Kinect to create this “Matrix”-esque lighting. An intriguing gimmick that occasionally provides some tension, but it’s rather flat compared to the rest. Sometimes they will just do a jump cut in order to give jolts. A kid will get out from bed and suddenly he will be at the door. How f@cking lazy is that?! Joost and Schulman don’t do a terrible job. There are moments where I was wringing my hands in anticipation, but I think they’ve contributed all they have to offer for this franchise. They’ve run out of ideas. 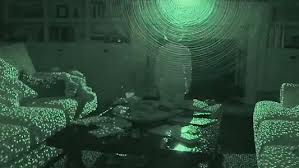 The previous two films had pretty flimsy narratives in retrospect, but the jolts were generally enough to keep me from being bored. Since “Paranormal Activity 4” was lackluster in that regard, it draws more attention to the more objective flaws. Remember when characters lugging around the cameras almost made since? It was always a stretch of the imagination, but “Paranormal Activity 4” doesn’t even bother offering an explanation half of the time. Alex and her boyfriend (Matt Shively) see the kid acting strange and suspect that MAYBE something supernatural is going on. So they rig the computers to film everything (for some reason, everyone has one), but as it becomes more apparent that they are being haunted, they stop bothering trying to catch it on tape. This is fairly refreshing and realistic. We can presume they just forgot about the footage, which continues to record on its own. But Alex keeps wielding hand held camera (I’m behind on technology, so have no clue what she was using) in the most nonsensical of places. Her brother (Aiden Lovekamp) goes into a strangers house and she follows….WITH THE CAMERA?! Am I supposed to buy that Alex is going out in the middle of the day with her camera and then continues using it while having a conversation with a total stranger? In fact, people tended to be idiotic for the sake of the plot. The Father (Stephen Dunham; RIP) witnesses something crazy and tries to explain this to his wife, who brushes him off in the most contrived way possible. The movie is full of shit like this. It’s not even properly paced. While more substantial chills begin to happen earlier on, the film will peek with the demon doing something ambitious. But then it goes back to ‘moving chairs’ and other minor things before building to another climax. I thought this movie was about to end TWICE, before it actually ended. The writer clearly thinks we’re only in this for the cheap thrills, so figures he can deliver a half-ass script. He should be ashamed of himself!

To the films credit, I did appreciate how the characters weren’t total rehashes of the previous casts. I thought the acting was good and occasionally the story would capture my interest. There are a few decent surprises, including the return of a past character in a context that I hadn’t been expecting. But instead of delivering a captivating story, it only teases us with possibilities. It’s as if one of the filmmakers wanted to do something new and fresh, but the rest wanted to continue with the same formula. So we get the same old shit, but with hints that something better is happening off-screen. I wouldn’t say I hated or even really dislike the movie. During my viewing, I felt it was only slightly inferior to “Paranormal Activity 3” (which I gave a 2.5/4 star rating). But the more I thought about it, the more I realized how weak it was. Sequels are usually designed to make money, but this one left me feeling that I was being taken advantage of. If you want to continue to produce a golden coin franchise, producers, then step up your game. If each entry sucks more than the last, who’s going to want to watch “Paranormal Activity 5“? If you want a REAL horror film, watch “Sinister“. It’s much better.

Note: Throughout the feature, I felt it was a 2/4 star movie. It wasn’t until I spent the bulk of this review pointing out what it did wrong that I realized it was worse than I had given it credit for. But as I said before, I don’t hate it.

Nudity: None, although there is talk of sex. Actually, was it just me or did the camera linger on the protagonists 15 year old body a bit too much? There are some perverted undertones going on.

Overall: “Paranormal Activity 4” is probably worth watching if you liked the past three, but I would spend little-to-no money on it. Maybe wait till it hits the dollar theater or becomes a rental. It’s not very good, but people like me have compulsive franchise disorder. We almost feel like we have to give it a look.