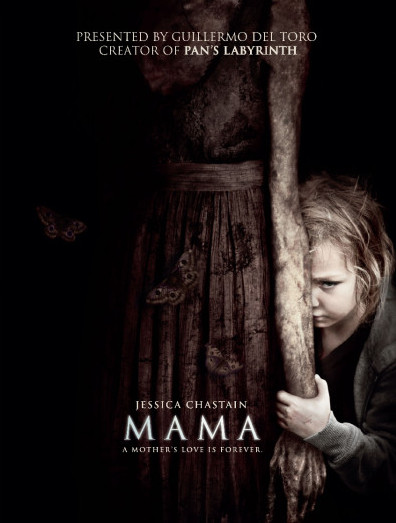 Plot: Two young girls survive in a cabin for five years due to being watched by a ghost whom they call ‘Mama’. When they are found, they are placed in the custody of their Uncle Luke (Nikolaj Coster-Waldau) and his girlfriend Annabelle (Jessica Chastain). Unfortunately for the couple, ‘Mama’ doesn’t take kindly to other people caring for the girls…

I chose to avoid “Mama” during its theatrical run for a few reasons. The first was that it looked like every other modern day ghost movie which spawned since the success of “Paranormal Activity”. I’ve gotten bored of the trend. The second was its abundance of CGI, which I consider to be glaringly out-of-place in a film like this. The third reason was that there were other movies which I was more interested in checking out (“The Last Stand“). But the final and most important reason was it seemed like I would see that same freaking trailer played every time I would go to the theaters. I hadn’t been so burned out on a horror film BEFORE IT WAS EVEN RELEASED since the “Dark Water” remake. But I figured I’d give it a look when it hit DVD and did I make a mistake missing it in theaters? No. Hell no! “Mama” isn’t necessarily bad, but it ended up being just about everything I didn’t want it to be. I correctly predicted many of the flaws which would plague “Mama” just from watching the trailer. Perhaps more frighteningly, there were a few problems which I did not see coming.  It should be noted, however, that the film has its fans…even though most viewers were lukewarm about it either way. I guess I can see the appeal to some, but it did nothing for me.

Even though I personally liked “Paranormal Activity”, I can’t say I’m enthusiastic for the trend it jump-started. Even though the franchise didn’t give birth to the conventions and cliches which would become synonymous with this subgenre of horror, it did popularize them. “Insidious”, “Dark Skies”, “Sinister” “Don’t be Afraid of the Dark” , “A Haunting in Connecticut”, “Dark Mirror” and now “Mama” are so similar in terms of story presentation that I sort of believe the writers each deserve credit for all of these movies. Now, remember that I did like plenty of those films, but that was primarily due atmosphere, suspense, etc. “Mama” has all of the clichés, even down to someone being an expert on ghosts and expositing story elements, even though she should have no idea how this works. PLEASE, FUTURE PARANORMAL HORROR MOVIES! TRY SOMETHING NEW!

I don’t like generic. In fact, I prefer bad over generic, which is why I gave a passable review to “The Devil Inside”. Even if it failed on many levels, at least it was kind of different. “Mama” is pretty generic, but at least it’s safe within its tired formula. Or it would be…You see, one of the side effects of certain clichés is that the characters aren’t very likable. Generally, they’re just idiots who have to act that way to serve the story, but “Mama” just has unpleasant characters. Our protagonist, Annabel, acts too much like she wants nothing to do with the kids right in front of them. Yet she’s surprised when they don’t like her. The kids have the tendency to just be bratty, as movie kids tend to do. Naturally, I’m doomed to roll my eyes excessively when their relationship starts to develop. Out of nowhere, Annabel starts embracing her maternal side and the kids warm up to her as well. If you listen closely, you can hear the sound of me yawning. I also don’t like how its treats the supporting characters. We’re supposed to hate the aunt, but why? Because she thinks she’d make a better parent than the underpaid artist and the punk rocker, when the latter doesn’t even WANT the kids? Because she freaks out when she sees nasty bruises on the kids’ arms? Yeah, she’s so terrible. Amusingly, the doctor figures out that Mama is real as soon as it becomes obvious, but follows this information up by doing the most idiotic thing possible. Yeah, go to the freaky Cabin alone at night to take pictures and see what happens…I hate it when bad writing is used to keep the story moving…But even worse is just the familiar story elements. I feel like I’ve seen these dilemmas and situations too many times before. Paranormal horror films have become gruelingly monotonous.

But is “Mama” scary? No. At least I was never scared. I will admit that Mama herself was pretty freaky looking, but the gratuitous usage of CGI ruined her effect on me. These kinds of films are supposed to be scary because of subtlety. There’s nothing subtle about CGI- or at least this level of CGI. Even worse, some scenes have a strange humorous edge about them. I couldn’t decide whether the parts where Mama is playing with the children were supposed to be scary or funny. If it’s the former, it was unintentionally hilarious. If it’s the latter, then the horror aspects are undermined because this entity is playing with children! To continue with the awkward tone, the finale feels like Tim Burton suddenly became the director. The visuals are more akin to a dark fantasy than a horror flick, the drama becomes overly sentimental to the point of becoming cheesy and the villain is revealed to have been misunderstood. It just felt so out-of-place compared to the first two acts. Maybe “Mama” was intended to be more of a fantasy than a horror flick, but the marketing betrayed the movie by presenting it as a horror? Maybe it was just about a misunderstood and troubled ghost competing with a misunderstood and troubled woman for the affections of two children? If that was true, then they shouldn’t have bound the story to the formula of the “Paranormal Activity” trend. Plus, it failed to adequately develop its protagonist OR its antagonist. The heroine is forced into a parental role and the enemy treats her children as possessions, using them as extensions of her own happiness. At no point does either side ever seem to realize their flaws, because the filmmakers didn’t seem to ever realize it. 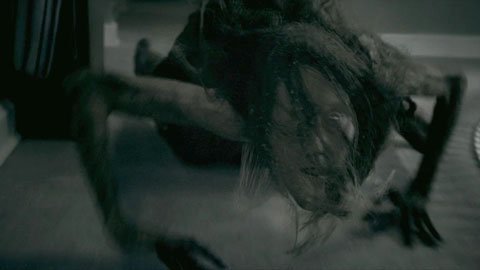 The main problem with “Mama” though is that in terms of story, it’s the same old shit that we’ve seen in every other paranormal flick out there. The only parts which leave an impression- the weird attempts at humor and the sudden transition from horror to fantasy- only stand out because they don’t work. I will concede that there are a handful of great shots, one moment which caused me to jump and the acting was good. Even the child actors nailed their roles, with Megan Carpienter probably being the best thing about this movie. But I am so sick of the same story being told over and over again. For it to have worked, I would’ve needed to be scared. But “Mama” didn’t scare me. I’m not even sure if “Mama” wanted to scare me. Part of me almost thinks it was aiming to be a satire of modern day horror, but if that’s true, then all it did was give “Scary Movie 5” more material to parody. Seriously, this movie is too easy to make fun of.

Overall: I disliked “Mama” because it’s just very generic and the only stand-out moments tend to be its failures. But others have liked it so if you are partial to this subgenre of horror, you might want to consider giving it a look.