(Written and Directed by Gilbert Chan) 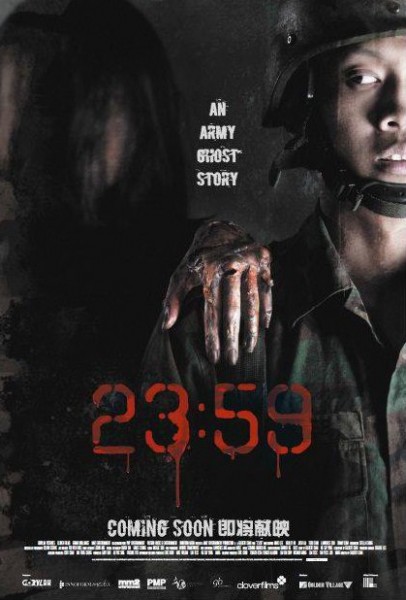 Plot: Tan (Tedd Chan), a platoon recruit who isn’t held in high regard by his fellow soldiers, finds himself haunted by a mysterious specter every night at 23:59 hours. When these paranormal occurrences suddenly take a nasty turn, it’s up to his best friend Jeremy (Henley Hii) to solve this mystery.

The first act showcased an exaggerated style of horror- which is neither a praise or a criticism. There was nothing subtle about the scares, with ghastly images suddenly appearing on-screen accompanied by sinister music chords. When a door mysteriously opens, the filmmakers emphasize the loud creaking noises. It’s a little over-the-top, but I actually am perfectly fine with those kinds of scare tactics. It can be fun in a ‘telling ghost stories around a campfire’ kind of way if done right and this flick was doing it right…at first.. “23:59” did a good job at setting up a mood, so I immediately adjust my mental gears to prepare for the kind of thrills the movie wanted to deliver and for awhile I was content. The cinematography and sound design worked together masterfully to get under my skin and the jump scares succeeded in making me flinch. I was convinced that this experience would at least be…sort of positive? While “23:59” was succeeding in the right areas, it’s primary weaknesses had already pulled their pants down and mooned me from the first minute- but I’ll get into that later. The point is, I liked its approach and thought the military angle was ripe for the plowing. The ‘march’, which involved a small group of recruits going into the menacing jungle and encountering the supernatural and/or their own madness, was a great idea. 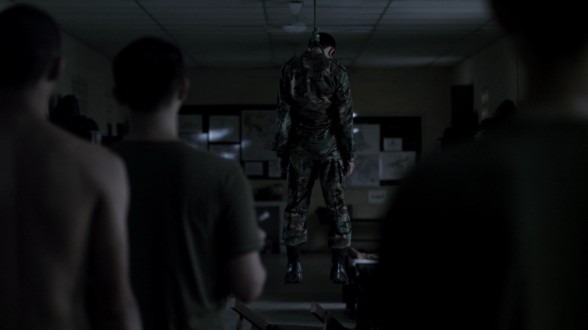 But it’s like you’re making love to a beautiful woman and just as you start to become familiar with her nether regions, you remove all traces of clothing only for- PENIS! THIS CHICK HAS A PENIS! You suddenly realize her masculine voice should’ve given you a clue…and maybe the fact that her name was Karl…but how were you supposed to know!? Then, if things couldn’t get any worse, she- or he- proceeds to brutally rape you and leave you in a puddle of your own tears…Now, we all have been in a situation like that at some point in our lives, but that’s pretty much what watching “23:59” is like. It looks good and its early successes suggest you are in for a treat, even if in the process, you’re ignoring the warning signs which imply the film might suck. Then the successes stop and the failures begin, making the experience MUCH worse than if it was just bad from the start, because I thought I was going to enjoy myself! But why is it bad? What makes this movie misfire that severely?

If you read my review of “R-Point“, you might remember that I praised the scares while condemning the characters for being annoying. This cast makes me want to hug and kiss the assholes of those assholes. That might be disgusting, but so were these characterizations. The characters are a perfect storm of obnoxious and stupid. It’s like Gilbert Chan wants to make the military look like a bunch of incompetent goofs. They’re constantly yelling at each-other, which might be more tolerable if they weren’t saying the same shit over and over again. How many times does the token bully need to call Jeremy a pussy before Jeremy responds with ‘Your mouth stinks‘? I swear, they re-use those same lines over and over again with minor variations. Or what about Tan constantly telling Jeremy that he will be the next victim, with Jeremy responding that there are no such things as ghosts? I think the most irritating conversations have to be between the Captain and the Sergeant, which has the Sergeant insisting that there is something supernatural going on and the Captain responding with: “Do you know what you’re saying?“. This is a SHORT 78 minute feature, so THERE IS NO EXCUSE TO REHASH SO MUCH THIS MATERIAL THAT WASN’T VERY GOOD TO BEGIN WITH! Amusingly, even though we were supposed to sympathize with the Sergeant, his arguments were so absurd that I couldn’t help but agree with the Captain- EVEN THOUGH WE KNOW HE IS IN THE WRONG. Every character is either noisy, aloof, rude, cruel or moronic, so every interaction between the characters is incredibly awkward to behold. What’s funny is that the worst offenders end up being totally superfluous to the script. The bully has a somewhat heartwarming scene where he is shown to be remorseful and he gets plenty of screen-time, but his effect on the overall story? He has none! The Sergeant is an expert on the supernatural, so you’d think he’d play a major role, but despite being granted so much time to flesh out his character, he also doesn’t have any impact on the story in the long run. They get MUCH more screentime than Chester, who WAS important to the plot. THIS IS CRAPPY WRITING, PEOPLE! 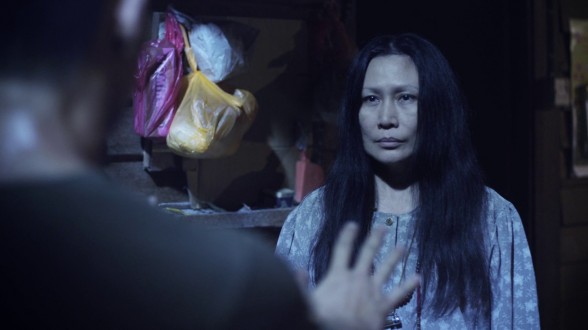 The story is also a tankwreck (see what I did there?), although that might have to do with the very short running time. Usually, I would be grateful that a bad movie is so short and I will concede that the pacing isn’t bad, but the story needed more time to flow. The film has this nasty tendency to introduce important information RIGHT BEFORE that story thread will be solved. Why is Tan and Chester being harassed? There’s absolutely no way for us- the audience- to know because no connection is made between these two characters. Yet right before that IMPORTANT plot point is explained, it’s brought up for the first time. Huh? THIS SHOULD’VE BEEN EXPLAINED THIRTY MINUTES PRIOR, so we can build our own theories on this mystery and it wouldn’t feel like a retarded asspull. In one case, the information is delivered AFTER the story thread was resolved. We learn Jeremy has an estranged relationship with his Father, then his Father dies, then we have a flashback showing that Jeremy more-or-less knew about his illness. It would’ve been more effective if that phone call came prior to the Father’s death, but since it’s shown afterwards (and it wasn’t necessary anyway), it loses all of its potential dramatic impact. Subplots such as the past suicide and a character being possessed either are irrelevant or their concluded in a way that makes them feel irrelevant. The investigation was laughable too, as it lasts like 5 minutes and it only leads to a revelation that OTHER CHARACTERS HAD ALREADY REVEALED. I don’t even feel like bitching about the reliance on exposition, told by characters who probably shouldn’t know this shit, although I guess I just did. I was disappointed that the march lasted about 10 minutes. I find the idea of characters being lost in the wilderness, isolated from the rest of the world,surviving off limited rations to be scarier while being preyed upon by the supernatural to be scarier than staying in a comfortable base, where you can rest, eat and leave when you want to. Yet apparently Gilbert Chan didn’t agree with me. *Sigh*.

After the first act, the scares start losing their impact. At best, they fall kind of flat, neither being embarrassing or thrilling. At worst, they become unintentionally amusing. It really does seem like Gilbert Chan shot this movie in chronological order, but maybe spent too much time on the first act so he had to hurry through the rest. Or perhaps he just used up all of his best ideas early on and was running on fumes for the rest. This is all speculation, but that doesn’t change the fact that the first act was fairly frightening while the rest ranged from dull to silly. Whatever potential the story had was eaten alive by horrendous character writing and a disorganized plot. I will concede that I prefer this over the likes of “The Possession“, “Dark Skies“, “Mama” or any of these modern day western ghost stories because at least “23:59” is kind of unique- if only in comparison. It’s much more akin to the J-Horror flicks of a decade ago than it is to the trend started by “Paranormal Activity“, making it kind of a throwback. But above everything, I felt conned because “23:59” started off strong and then suddenly stopped trying altogether. So disappointing…

Overall: “23:59” is a very frustrating experience because it makes you think it will be decent, but then changes its mind and sucks. Easily my least favorite of the military-themed horror flicks I have seen (so far).