(Written and Directed by Leigh Whannell)

Plot: A prequel to its predecessors, another family is haunted by a malevolent entity and the only person who can save them is a troubled psychic (Lin Shaye).

The main problem with “Insidious: Chapter 3” is that it doesn’t need to exist. While “Insidious” made a lot of money and was well received by audiences, critics and MartialHorror’s alike, it just wasn’t franchise material. This has less to do with the quality and more to do with the story- which in this case is your typical ghost tale. Can they increase the scale, explore new territory and develop a mythos that separates it from other entries within the genre? I couldn’t come up with any ideas and considering that the two sequels failed to break new ground, apparently writer (and now director) Leigh Whannell couldn’t either. Strangely, “Insidious: Chapter 2” had a stinger (ghost psychic) that could’ve lead to a unique angle, but the filmmakers chose to follow the prequel route instead (ugh)…Were there really any questions that needed to be answered in order to justify a prequel? Did we demand to know how Elise (Lin Shaye) befriended Tucker (Angus Sampson) and Specs (Leigh Whannell)? If anything, ends were loosened because now it seems like Darth Maul-ghost and the Woman in Black are more interested in Elise than their original victims, which doesn’t fit very comfortably within the established continuity. As both entities were defeated in subsequent events, I don’t see how this will lead into “Insidious: Chapter 4“…nor did I feel these revelations added any substance to the first two chapters. Let’s face it, the only reason “Insidious: Chapter 3” exists is because James Wan wants a franchise he will make money off of every time a new entry is released. He missed an opportunity with “Saw“- apparently selling the rights because he didn’t expect it be so successful- and wants his own cash cow. Yet while pointless, I have to admit that “Insidious: Chapter 3” did manage to get under my skin and make me jump. It does its job, even if it has sort of proven my point…

The script is very conventional, hitting all the familiar points and usually only standing out whenever it’s doing something wrong. The dialogue in particular was pretty weak, either being way too corny or being thinly disguised exposition. The acting is…okay, I guess. They sometimes struggle with the dialogue, although I really liked Dermot Mulroney as the Father, who is much more likable than the usual ‘skeptic Father’ archetypes. Lin Shaye’s acting has always been uneven to me, as she tends to over-sell everything, but she’s incredibly entertaining to watch. Stefanie Scott (Quinn) is the heroine, but nothing about her character or performance stood out. I’m not entirely sure why she needed a brother, as his only contribution is bringing in Tucker and Specs- who were still funny. But even more strange is Quinn’s quasi-love interest, who gets a lot of time built into establishing his attraction, but then he vanishes and is never mentioned again. Was he only present in order to set up the ‘knocking on the wall’ scare? If so, it wasn’t really worth it and only served to eat up time. The whole ‘learning to let go’ message was too heavy handed for me and instead of sniffling or smiling at its resolution, I just…gagged. Yet the difference between this and “Annabelle“- an equally cliched movie, which I hated- is that “Insidious: Chapter 3” feels like it was written by a human being and not some soulless machine that runs off cliches. This is probably one of Leigh Whannell’s weaker scripts, but he was trying to engage the audience and make us care for what was happening. I can’t say he completely succeeded, but I always appreciate effort. 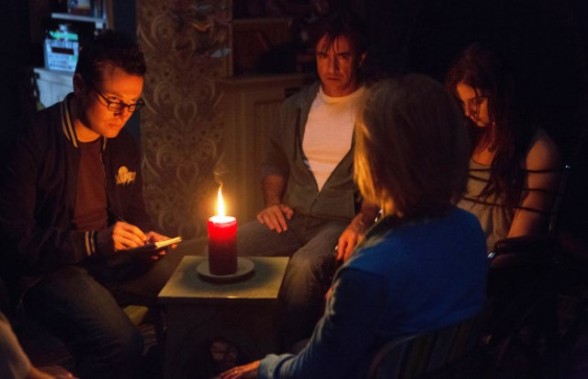 “Insidious: Chapter 3” is Leigh Whannell’s directorial debut, but I wouldn’t have been surprised if James Wan had been behind the camera. Whannell recreates the same style that I liked in the previous flicks, from the camera angles to the use of colors to the post production additions and they give this movie some flavor amidst an over-saturated genre. The only other flicks that resemble “Insidious Chapter 3” in terms of aesthetics is “Insidious” and “Insidious: Chapter 2“. I also still enjoy the over-the-top scare chords, although Whannell also knows when to use silence for maximum effect. But even though Whannell is bringing back Wan’s style, he doesn’t necessarily rely on his partners old tricks. He develops his own scare tactics, providing some different and interesting ways- at least when placed against the previous two chapters- to get under our skin. There are a lot of jump scares, but they succeeded in making me jump and were earned through suspenseful build up. The new villain (Bane-ghost) is pretty chilling and my favorite part in the flick is when he traps the heroine in a room. It’s creepy as hell thanks to the rapist-vibes that Bane-ghost gives off and the framing of the scene magnified my unease. Unfortunately, Whannell does occasionally struggle with the tone. Unlike “Insidious: Chapter 2“, I never felt like this one was supposed to be campy, but some parts do produce unintentional giggles. I also found the third act to be rather lackluster. The seance is weak compared to a similar scene in “Insidious” and the Further is no longer quite so mysterious. We’ve seen it before…twice…It’s gotten kind of old…Finally, the pacing was pretty awkward. It starts off too slow and the content can be repetitive. How many times must Elise offer her help, only to back down for the SAME EXACT REASONS?

I did like “Insidious: Chapter 3” more than “Poltergeist (2015)“, because it was “scarier”. As a horror film, I was mostly satisfied. My heart occasionally stopped, my nails would get chewed and my butt would occasionally leave my seat- this is what I expect the most from the genre. But as a prequel, it added nothing. As a story, it offered little and I don’t really think I need an “Insidious: Chapter 4“…nor did I really need “Insidious: Chapter 3“…The good parts could’ve easily been in any ghost movie! The Further has grown stale and in many ways, that was the selling point of the franchise. But at least Leigh Whannell seems to be a pretty good director and was able to wring some effectiveness out of this project. I was torn between a 2/4 and a 2.5/4 star rating, as I feel the former is a bit harsh while the latter is too generous. I guess I’ll go with 2.5 stars, as “Insidious: Chapter 3” did excel in the scare department and that is more important than the writing and acting. I think this one had more high points than the second chapter, but the second chapter had a stronger script.

Violence: PG-13. There are some harsh moments though.

Nudity: None, but there is definitely some rape subtext with the new baddie.

Overall: “Insidious: Chapter 3” is better than it has any right to be thanks to stylish direction and solid scare tactics, but the story didn’t really need to be told. I could live with or without it.