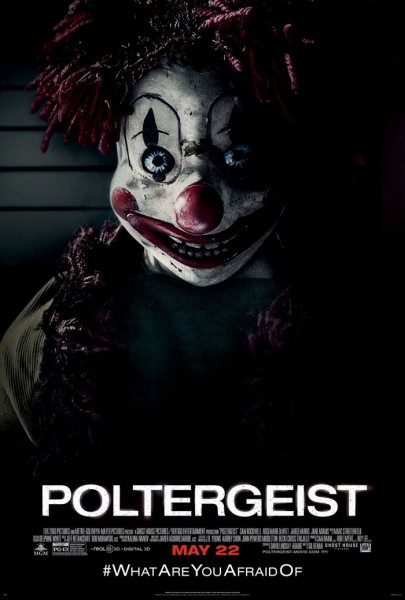 Plot: A struggling family move into a new home, only to find that it is haunted by a poltergeist.

I can sum up my entire review in a single sentence: ‘Anything “Poltergeist (2015)” does, the 1982 original did better’. That is not to say that this remake did anything poorly and at the absolute least, it can boast being competently made. The dialogue, acting, cinematography, editing, special effects and direction were all pretty good on their own. Gil Kenan does manage to produce some creepy and suspenseful moments, while the script never relies on plot induced stupidity in order to keep the narrative moving. I also appreciated the fast pace, probably helped by the relatively short running time. For those who fear the slow burn build up of “Paranormal Activity“, rest assured that the ghosts become proactive pretty quickly and the remainder of the runningtime is dedicated to the protagonists combating them…But I was against this project from the beginning, as “Poltergeist” is- at its core- just another ghost flick. The execution was exceptional, but the concept wasn’t any different from any other haunting story. Either the remake would have to change the majority of the content, which would make it difficult to justify using the name “Poltergeist“, or it would just be a glorified, modernized re-shoot…and I highly doubt the director of “Monster House” is going to be able to match Spielberg (or Hooper; depending on who was really in charge) in quality. When the clown showed up, I was like “Not bad, but the original did this better“. When the trees attacked, I was like “Not bad, but the original did this better“. When skeletons started popping up during the finale, I was like “This…is kind of weak, while the original had an awesome climax…so naturally did this better“. There is some new material, like when the audience gets to see the ‘other world’. That was kind of cool, even though not as cool as my imagination…which was actually put to work in the original…BECAUSE THE ORIGINAL DID THIS F@CKING BETTER. That was the only time the updated technology was really utilized. I think the bit where the older sister (Saxon Sharbino) nearly gets pulled into the ground was new and that was fairly intense. The infamous ‘face tearing’ bit was removed, replaced with a much more tame scare, reminding me that the 1980’s were so much cooler in what could be shown in a ‘family friendly’ film. But otherwise, the content is mostly identical to the original, making me wonder why this must exist- outside of the obvious monetary value. 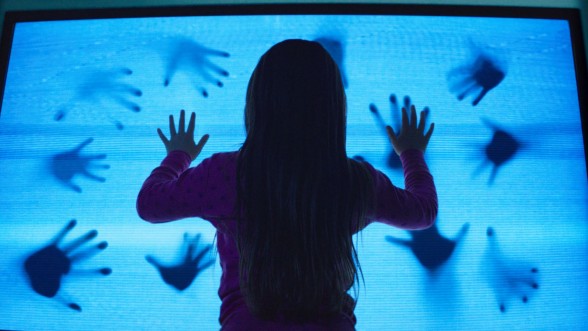 Believe it or not, I do have a grudging answer for that question. “Poltergeist (2015)” might be way too much like “Poltergeist (1982)“, but “Poltergeist (1982)” is much different than most modern poltergeist movies. This actually does allow the remake to stand out amongst its contemporaries, having a different kind of visual style, larger production values and a less cynical tone. There is more humor (Sam Rockwell shines during his funnier moments) and the character interactions are pretty fun. Admittedly some of the cliches that irk me do occasionally pop up, such as the elder being bitchy towards her parents for moving, but at least the writer added a certain amount of self awareness to these cliches. As nice as this was, I couldn’t help but feel like I would’ve preferred them just to re-release the original classic. After all, they are practically the same movie, except the original was better. Have I mentioned that the original is the superior version of the remake? Yes? Well then let me say that the remake is an inferior version of the original. I guess “Poltergeist (2015)” might be an improvement over “Poltergeist 2” and “Poltergeist 3“, but even they knew that trying to beat or even match “Poltergeist (1982)” at its own game would be a colossal mistake. At least they succeeded in finding their own identities, even if they were subpar efforts. “Poltergeist (2015)” is closer to being a good movie, but its legacy will be devoured by the film it tried so hard to imitate- because the original was better in every single way.

They should’ve just remade “Poultrygeist” instead. Because the Night of the Chicken Dead needs to be re-told as many times as possible.

Nudity: A couple almost has sex, but are interrupted.

Overall: “Poltergeist (2015)” is more-or-less an updated, inferior- but not bad- reshoot of “Poltergeist (1982)“. If you haven’t seen the latter, you should check that out. As for this…meh, it’s up to you. I’d say wait for it to be available as a rental, if you need to watch it at all.