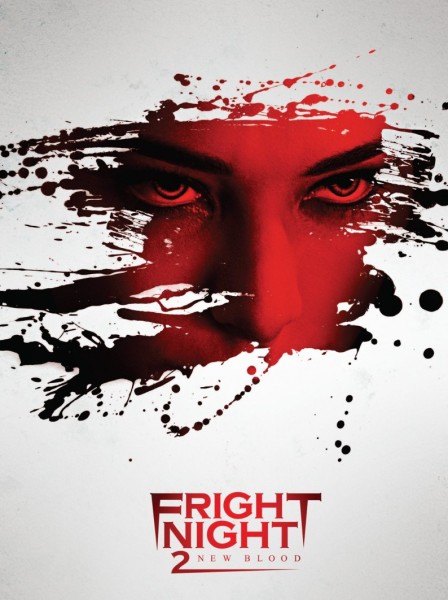 Plot: Charley (Will Payne), his ex-girlfriend Amy (Sacha Parkinson) and his best buddy Evil Ed (Chris Waller) are among a group of High School students sent to study in Romania…for some reason…but Charley begins to suspect that his sexy teacher, Gerri (Jaime Murray), is a vampire when he witnesses her kill someone…Wait, didn’t I review this movie before? Twice?

“Fright Night 2”…no, not “Fright Night Part 2 (1988)”, I mean the 2013 sequel to “Fright Night”….No, not “Fright Night (1985)”, I mean “Fright Night (2011)”…This is the fucking sequel to the remake, EXCEPT it is more of a remake than it is a sequel…So this is the second remake of “Fright Night (1985)”, even though it is claiming to be a sequel to the first remake for some reason…God damn it, no wonder the industry is in the crapper. While “Fright Night 2 (2013)” does deserve credit for changing up the formula a tad, primarily with a gender flip and a new location, it’s telling the exact same story that wasn’t especially original when it was done back in 1985. Yet some of my BELOVED readers love requesting me to review movies I have no interest in reviewing and since I apparently cannot say ‘no’, I sat down in my chair- arms folding, frowning stubbornly and glaring at my television- as “Fright Night 2” began to waste my time…Except it didn’t…”Fright Night 2: New Blood” isn’t especially memorable or…good…But it is much better than I was expecting. At times, I even felt it came closer to capturing the atmosphere of the original than the more big budgeted remake did. Yet I am mostly alone in my praise, because everyone else just thinks this is a piece of shit.

My first and previous experience with director Eduardo Rodriguez was not a pleasant one, as that piece of shit happened to be “El Gringo”. That film was so obnoxious that it made me wary about watching my beloved Scott Adkins in action again…and keep in mind, my love of Adkins wasn’t even effected by his appearance in the awful “Stag Night”. Yet I also had to admit that I respected Rodriguez for trying his absolute hardest to make an enjoyable film out of a mundane script. His direction was energetic, stylish and quirky, but instead of making his movie charming, it instead was distracting and made the final product aggravating. He brings the same passion and conviction to “Fright Night 2”, but this time I mostly dug his hyperactive style. Sure, some moments don’t work, but he does have some creative shot compositions, delivers a cool comic book sequence, breaks the fourth wall with some bizarre POV shots and never stops forcing his presence down our throats…But I still find myself appreciating his visuals, especially considering how lame the script was. Hell, “Fright Night 2” is slickly produced and makes good use of its locations, although the CGI sucked. Luckily, I was paying more attention to the spooky castle and the exotic outdoors of Romania, so the bad CGI didn’t hamper my overall enjoyment. The sets, the lighting and music work together to create some decent atmosphere. The more intense sequences were surprisingly nail biting. The gore is often brought to life using practical effects and they’re pretty nasty. “Fright Night (2011)” might’ve been a more technically accomplished film, but I felt “Fright Night 2 (2013)” had a better understanding of what made the original work. It takes old school Gothic imagery and gives it a polished update.

It’s just too bad that the script pretty much blew. The writer, Matt Venne, has made a career of penning direct-to-DVD sequels to films no one cared about to begin with. But he does have some talent, as I did think he did a solid job of writing “White Noise 2”, although that doesn’t carry over to this project. I did like a lot of his ideas, such as making the opening victim fodder rather resourceful. Instead of just running, screaming, and dying, she instead BLOWS UP HER CAR in order to escape the menace. It doesn’t work, but I wish victim fodder acted more like that. I also liked the tie-ins to the historical Elizabeth Bathory. While that still occurs, it doesn’t linger as much as it did in ALL of its predecessors. Evil Ed seems to believe him immediately. Unfortunately, the relationships and character development is rushed and often doesn’t make sense. Was Evil Ed supposed to be sympathetic or not? The movie doesn’t seem to know either. Doesn’t the ending contradict a previous line? Why does the apparent death of a vampire cause pain for the person who turned him? What are the odds that Charley happens to come across two murders? That was especially baffling because it’s ambiguous as to whether Charley witnessed a kill or was just imagining it (the former is implied), but either interpretation comes with some serious plot holes. In previous films, the vampires kidnapped the girlfriend in order to screw with the hero. Here, they add some nonsensical ritual nonsense- it’s that nonsensical- that was both unnecessary and stupid. Why is it stupid? Because how in the hell would the Vampire know this shit? Above everything though, I just wish the script didn’t follow the formula of its predecessors. It just made the film predictable. I correctly guessed everything that would happen because…well, I’ve seen the others.

Before I begin with criticizing the characters, I will concede that the performances are much better than they should be. Often, the material will work against them, but they’re all solid actors who can go places if they choose the right roles. The standout has to be Jaime Murray, who was ideal casting as the vampire chick. She’s sexy, deadly, mysterious and very charismatic- although she acted too villainous when she’s trying to come across as innocent. The problem is that the characters are all bad in different ways. Charley’s whining is overblown and he acts like a moron whenever he tries to make a point, a trait I didn’t like in ANY of the characters previous incarnations. The whole subplot with Amy was just a wet blanket on the entire film, being significantly more awkward than entertaining. Evil Ed was just FUCKING OBNOXIOUS. It took quite some time to realize that both Charley and Evil Ed were 80’s stereotypes, but Ed feels like he was transplanted from the 80’s. The dialogue isn’t very good all around, but whenever Ed speaks, the writer tries too hard to be hip. Have you ever talked with an old guy who’s trying to sound young and cool? That sums up the shit that comes out of Ed’s mouth, which is especially amusing as Ed is obviously young. I didn’t mind Peter Vincent, but felt the character was underused. Even the 2011 remake gave the character a real arc, while this film seemed unsure what to do with him. I could forgive most of the flaws of the script, but the characterizations just ruined it for me 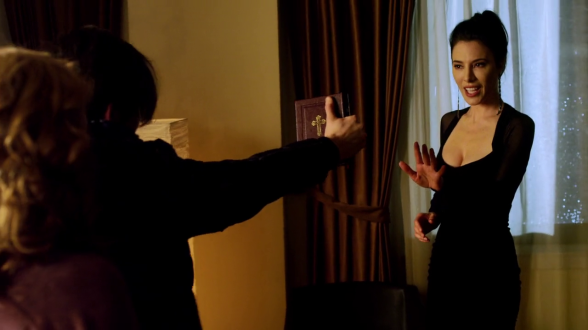 “Fright Night (2011)” was fairly entertaining, one of those flicks you enjoy while watching it but then immediately forget what you had just seen. It was probably a more well rounded movie than this sequel, but I have to admit that I kind of wished this was the real remake. It had stronger atmosphere, more suspense and seemed like it was trying to recreate what we loved about the original, while also being its own entity. Unfortunately, it’s also kind of stupid and annoying…Most of the detractors, who represent most of the viewers, couldn’t forgive “Fright Night 2” for that reason. I think I’m being kinder because at least there was inspiration behind the camera, which is more than I could say about most direct-to-DVD sequels of forgotten films. I enjoyed myself more than I thought I would…even though I doubt I’ll bother with it a second time. But the original is still King! Erm, I mean “Fright Night (1985″), not the 1947 Three Stooges short of the same name…Damn it…

Nudity: Quite a bit of it, with some lesbian action present.

Overall: “Fright Night 2” isn’t that bad, but I am in the minority who actually (kind of) enjoyed myself. Watch at your own risk, I guess.