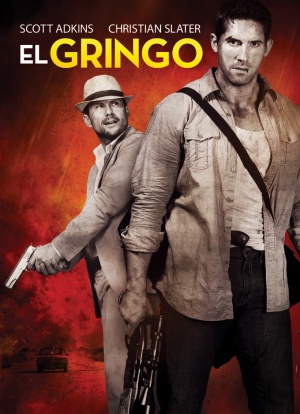 Plot: A man whose name is never revealed (Scott Adkins) wanders into a dilapidated, Mexican town with a bag full of $2,000,000. Unfortunately, the town is run by drug dealers who want that money for themselves. Action and stupidity ensues.

I’ve declared my love of Scott Adkins so much that I’m pretty sure my friends and family members have begun to question my sexuality. I yell to the stars- “I love Scott Adkins!” and then the stars reply “Dude, stop being so gay!”. But I can’t help myself! This is because my beloved martial arts genre has more or less become zombiefied in the west since Van Damme and Seagal ran their careers into the ground during the 90’s. When Adkins entered the fray, he was used as a supporting character, appearing in “The Shepherd”, “The Tournament” and was the antagonist in “Undisputed 2”. He’s probably mostly known for playing Van Damme’s sidekick in “The Expendables 2”, but he has finally become a leading man in the realm of direct-to-DVD. Adkins has the looks, acting chops, presence, martial arts abilities and the tendency to pick good films. So imagine my dismay when I disliked “El Gringo”. Actually, scratch that. I HATED “El Gringo”. It is one of those special films where everything is so obnoxious that it becomes unnecessary to criticize the braindead love story, the clichéd plot twists, the Mexican stereotypes and the unoriginal story…because there is SO much more to hate about this movie. Scott Adkins, I do still love you, but this sucked.

What’s frustrating about “El Gringo” is it does TRY to be an entertaining flick. The direction, if inept, at least is very energetic. Compare this to the majority of Steven Seagal’s direct-to-DVD actioners, which usually cost about the same as this. Seagal doesn’t care about ‘acting’, he just wants the pay check. Adkins, on the other hand, is doing his absolute best given the material. I thought he did fine, even when the script worked against him. The action scenes in Seagal’s movies tend to be low in quantity and quality, presumably because Seagal devours the majority of the budget- figuratively, but also maybe literally. “El Gringo” does sport a lot of action and there is an epic shootout during the middle block, when the villains learn that Adkins is carrying a lot of money. The rest of the action is…well, more on that later. But once again, I did feel there was effort when staging the action. I did like the use of squibs and at least the lighting was good. Hell, even if I were to compare “El Gringo” to the films of Dolph Lundgren (whose movies are superior to Seagal’s), I’d still say the filmmakers were much more ambitious when it came to the spectacle. So what went wrong? Why do I hate this movie? 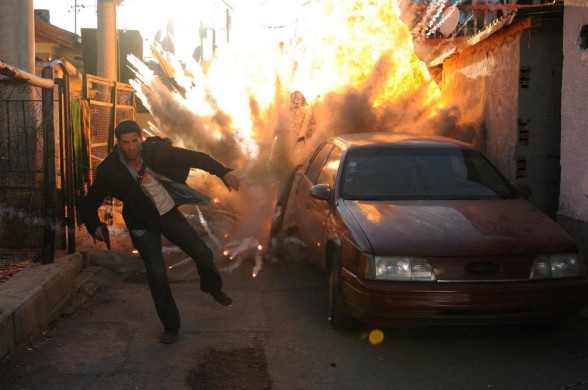 Let’s begin with the action scenes. The fight choreography ranges from pedestrian to pretty advanced, although at its best, it’s nowhere on par with Adkins’ better martial arts movies. The problem is the cinematography, editing and bizarre choices in direction sabotage EVERY FREAKING FIGHT. The camera can never stand still and every shot is edited too tightly, so it’s hard to make out what is going on. To make matters even more obnoxious, the directors attempts at ‘style’ backfire miserably. I’m not very good at discussing film techniques, so I just have to describe the overall effect. Some action scenes will have flashes to a black screen for a brief second, which made me wonder if the film stock was damaged. It added nothing, but took away from the martial arts techniques being used. Other times, it will be as if the DVD is skipping during the fight scenes. When he uses slow motion, it’s poorly timed because it makes the attacks look like they didn’t really connect. Every time the director wanted to spice up a fight, he helped ruin it.

But his horrid ‘stylistic’ touches do not end there. Even though the story suggests that his main inspiration was Sergio Leone, he is primarily borrowing from Robert Rodriguez. Trying to imitate Robert Rodriguez is only marginally more tolerable than imitating Quentin Tarantino. I like both of those directors, but I don’t like it when lesser filmmakers try to be those directors. It just comes across as…odd. Whenever they reference Acapulco, suddenly what appears to be an advertisement will pop up. That got old fast, although not as old as the re-occurring “Spring break” line. I also love how sleazy the director gets at times. Whenever the love interest appears, the camera starts zooming in one her bust. Actually, the camera becomes hyperactive whenever she’s on screen, constantly zooming around and getting different angles. The woman is sexy and all, but “El Gringo” is trying too hard to emphasize that. When the inevitable sex scene occurs, besides going on for too long and feeling out-of-place, I also again felt the director was putting too much work into sexying things up. She is already sexy, the fight scenes were good……STOP TRYING TO PUT YOUR MARK ON THIS FUCKING MOVIE! YOU’RE MAKING IT WORSE. Eduardo Rodriguez is such a hack that within a short time period, he also made the first poorly received Van Damme movie in years (“Dragon Eyes”) and helmed the (allegedly) unwatchable “Stash House” with Dolph Lundgren. I haven’t seen either of those films, but now I don’t really want too.

The story is a bit convoluted and shows that the writer didn’t really understand some of the tropes. Scott Adkins’ character is never named, making him sort of like a modern day Leone protagonist. Although “El Mariachi” was probably the real source of inspiration. Why isn’t he named? Isn’t the point of having a man with no name to emphasize his mysteriousness? They show too much of his past and the character is shown to be kind of a butt monkey early on, so it’s hard to take him seriously. We know too much about him and yet his character arc is so flimsy that you never understand why he’s doing everything. The remainder of the cast isn’t any better, primarily because everyone is either incredibly stupid in order to drive the plot or their characterizations are inconsistent…also in order to drive the plot. Another stupid decision by the director was to use a freeze frame accompanied by a fiery text, which shows characters names. It’s unnecessary and starts to get weird when they introduce characters this way whose purpose is to die in the same scene. Or what about that retarded kid who gets a similar introduction, but only appears in one scene afterwards before being dropped out of the movie? I should probably praise “El Gringo” for giving even minor characters odd quirks, but I often found myself rolling my eyes at them, like how a villain can’t stand having his hat knocked away. Ha…ha…movie…you’re so cute…ugh… The plot isn’t as complex as it thinks it is and yet it’s more complex than it needs to be. The bit with Christian Slater, who plays the man’s former boss, just padded out the running time and leads to a predictable- but frustrating- twist.  Oh yeah, how could I forget how the villains are using grenades and rocket launchers to kill the hero…as if that won’t blow up the money.

It’s difficult to judge the supporting cast because I blame the director for any flaws within their performance. To fit with the directors’ heavy handed vision, everyone oversells their performances with mixed results. I thought Christian Slater worked, making me wish he was used more properly within the story. The villains were fine and as I said, Adkins did the best with what he was given. Everyone else is…kind of annoying. To be fair, the director really wanted me to hate everyone in this movie. Either you’re a villain, a bitch or dumbass. The love interest is especially unpleasant as she has a self-righteous attitude in spite of the fact that she just extorted a shitload of money from our protagonist before screwing him over. The hero is an idiot for not protecting the money better- people either steal it or look in it while he’s sleeping- and what moron would sleep outside with that much cash? If I were in a town where everyone was either trying to rip me off or steal my bag, I wouldn’t bother getting any shut eye if I was SLEEPING OUTSIDE. Ugh, what was with that female thief too? He keeps calling her ‘kid’, even though she looks like she’s in her late 20’s. The movie recycles previous scenes where she steals the bag- like that’s not going to get old fast- and yet she’s supposed to be sympathetic. God, I hate this movie and everyone in it.

“El Gringo” is the equivalent of an already attractive woman constantly using plastic surgery, wearing too much makeup, wearing skimpy clothing and continuously posing sexily in order to appear attractive. Yet the end result is that she’s unappealing because it looks so phony and odd. Maybe it’s just my taste in women, but I probably would’ve been much more attracted to her prior to these so called ‘enhancements’. “El Gringo” had the talent, an interesting enough location and a story which could’ve worked. It had well choreographed fight scenes and old school- but not old fashioned- gun battles. Yet the director buried that underneath so much style that they all become unappealing. Oh yeah, I forgot to mention that the attempts at humor sucked too.

Overall: “El Gringo” thinks it’s cute with its attempts to be quirky and stylish, but it backfires and ends up being irritating for its efforts.