(Written and Directed by Peter A. Dowling) 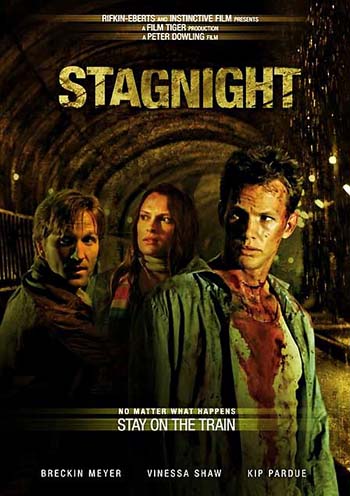 Plot: A group of morons find themselves lost in a deserted subway station and are hunted by bloodthirsty cannibals.

So I was reading some of the reviews on imdb and came across this little gem: “Attack of the camera man with Parkinson’s disease”. I know you cannot tell this from my typing, but I am currently pissing myself with laughter. That almost- I stress almost- made up for the high octane suck that “Stag Night” put me through. “Stag Night” represents everything wrong with modern day horror. But do you know what’s worse than being a shitty horror flick? It’s being a shitty horror flick that has little-to-no excuse as to why it’s shitty. “Stag Night” had decent production values, a stellar cast and a cool setting. The underground subway location is ripe with opportunity for terror, yet strangely it hasn’t been exploited within the genre too much. But despite this potential, “Stag Night” conveniently twisted its ankle, allowing itself to be brutally murdered by us fake critics.

Even though Peter A. Dowling is the official writer, I’m pretty sure that everyone who has ever written a “Hills Have Eyes”-esque cannibal film deserves credit for the screen-play as well. Just take “Wrong Turn“, take away everything which made that movie watchable and put it in a subway, then you have “Stage Night“. It is complete with ALL of the clichés. The cannibals have the same appearance as they always seem to have in these movies (deformed faces, dressed like hobos, don’t speak English, etc). Characters do what they always do and act as they always act. There’s usually some retarded subplot that is thrown in there to increase dramatic tension. In this case, Mike (Kip Pardue) is reluctant to tell his troubled brother (Breckin Meyer) that he won’t be best man as his wedding. But while we’re occasionally reminded of that, even when they’re attacked, it never goes anywhere. There’s no pay-off, although granted, I probably wouldn’t have given a shit anyway…Why does every bad horror movie have some sort of expert? In this case, it’s a history major who exposits why the movie is called “Stag Night“. Yes, they do attempt for something thematic, but I was too busy laughing at the attempt, so didn’t pay a lot of attention to how well they pulled that off. Knowing this movie, they probably screwed that up too. Yet the majority of the clichés come from the retarded acts of its characters. 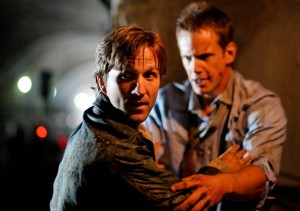 It’s hard to like the majority of these people, as they act smug and are noisy ALL THE TIME. I swear half of the dialogue during the first act mostly was comprised of “bitch” and “asshole”. They get stranded because they’re fucking morons. Tony (Breckin Meyer) hits on Brita (Vinessa Shaw), who gets tired of his advances, so pepper sprays the guy even though his friends had pulled him away from her. Apparently she forgot that pepper spray tends to get everywhere, they forcefully exit the train to breath. Bullshit writing happens and they end up stranded, but guess what? It’s an abandoned platform! I did have a good laugh when a character finds a newspaper about the Watergate scandal, showing that the place hasn’t been used for quite some time (bullshit!). I can overlook the absurd premise, even though I don’t understand how these cannibals can get away with so much. But…whatever. I’ll talk- and by talk, I mean rant- about that later on. But the bad writing goes beyond the “questionable” set-up.

So they decide to go through the tunnel to find the next platform, but two of them (Scott Adkins….and…wait, Scott Adkins is in this movie?) decide to stay behind and have sex. First off, it’s already been established that the place is unsafe due to giant HOLES in the ground. Two, the girl doesn’t know him and it seems awfully careless that someone would stay with a stranger in an abandoned location like that. Three, is there anything erotic about some nasty, dilapidated platform? No! They have sex so they will be isolated from the rest of the group, which will make their inevitable deaths easier to pull off. PLOT HOLE! Scott Adkins would just do a flying back kick on these cannibals and own them with ease! Actually, I’m kidding. What IS a plothole is that the other group witnesses a guard get massacred by the cannibals. They never wonder where this guy came from. I presumed that there was an exit/entrance on that platform (it would explain why he came from nowhere), but when they return to that same spot later on, it has been chained up. Did the cannibals do that? Well, then why didn’t they CLEAN UP THE FUCKING BLOODSTAIN! Furthermore, if the place was abandoned, why was the guard there? If guards check up on these tunnels, then HOW THE HELL ARE THE CANNIBALS ABLE TO DO ALL THIS! Either they’re killing all the guards- which WILL start to get the attention of the higher-ups- or the guards would’ve gotten backup and killed the cannibals. It might’ve been better had these creatures been more intelligent. All the writer would’ve had to do is show them cleaning up that bloodstain! Then at least I could presume they’re really good at covering up their kills. It’s suggested that they might be working with the local homeless, who could be the ones cleaning up after them, but that whole deal was never properly explained. 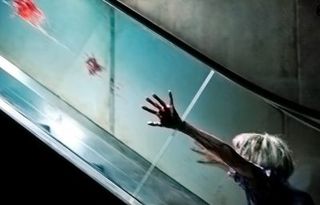 The characters continue to be morons and do moron stuff. At one point, they stumble upon a trailer (in this subway) that’s surrounded by caged dogs. Do they get the fuck out of dodge? No, they choose to investigate. I don’t know about you guys, but if I ever saw a nasty looking home, surrounded by vicious dogs in cannibal territory, I’m going to stay away from it. Only cannibals will live in a place like that, and they will EAT YOU. There is more idiotic stuff done in order to serve the plot. My favorite is actually the opening scene, where a wounded girl gets killed because she cant get up the escalator. Even though she’s limping, she’s moving pretty quickly and escalator’s don’t have that much power. She also keeps pausing and looking back. Just…keep…moving…you stupid bitch! One character is pretty smart and runs away, but keeps looking over his shoulder so he will accidentally make a misstep and sprain his ankle. Or they will stand around like idiots while the kid cannibal signals for Daddy. RUN DAMMIT! RUN! They’re also very loud, although the movie never seems to acknowledge it. When they see the guard killed, they use their normal voices, but the cannibals only notice them when they accidentally make a different kind of noise. “Stag Night” is…really, stupid. But this is the horror genre. We’re used to stupidness! Even if “Stag Night” is dumber than the norm…

When I said “Stag Night” represented everything I hated about modern day horror, I was primarily referring to how that fucking camera can’t seem to stay still. Believe it or not, the gore effects aren’t too bad. But it doesn’t appear that anyone knew how to properly light a scene. Too dark! The camerawork seems like it belongs in a found footage flick and the editing is even WORSE (more on that later). This made it very difficult to appreciate the carnage. The editing was bad because the scenes are carelessly spliced together without any sense of cohesiveness. For example, when the cast is hiding from the cannibals in that trailer, it leads into an action scene. I seriously could not tell what was happening. One moment, a cannibal is grabbing the girl and everyone is beginning to panic. Some distorted imagery later, they’re escaping. The director also seems to think that ‘blurry’ somehow translates into ‘scary’. Peter A. Dowling is a worse director than he is a writer, and that is more terrifying than anything about “Stag Night”. 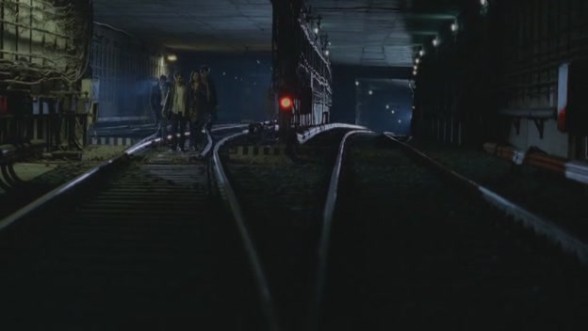 Anything good to say? Well, the cast does at least try, even though they have nothing to work with. The best performance probably came from Breckin Meyer, whose career must’ve tanked harder than I realized. “Stage Night” is not worthy of the actor who was in those awful “Garfield” movies, which is another horrifying thought. Still, I felt he made a believable tough guy, primarily because he didn’t oversell his badassness. He’s obviously scared, but he’s no wimp either. Kip Pardue is decent as the lead, slowly evolving into a tough guy himself. Vinessa Shaw struggles, but I blame the writing more than her. I’m still unsure why Scott Adkins was here. Maybe he wanted to do something that didn’t involve roundhouse kicks. His acting is fine though. One thing I did kind of like was how the characters would often sacrifice themselves for the others. It made them a little sympathetic before they died and it’s unusual to see such a feeling of optimism in a horror film. Unfortunately, you can rest assure that “Stag Night” fucks that up with the clichéd ending, which somehow manages to be worse than most of these kinds of endings.

“Stag Night” is just a bad, bad movie. The only competent aspect of it is the acting and even then, that’s just because it’s not bad. The characters are obnoxious, constantly doing unbelievable things so that they will die without the writer actually having to use his brain. There’s nothing inspired or unique about the story. In fact, the only ambitious aspects about the writing have to be the plot holes. Those were pretty epic and yes, I am being sarcastic. On paper, at it’s best it is a conventional horror flick. At its worst…it’s a conventional horror flick that sucked. The camerawork is shaky, the lighting is too dark and the editor should seriously start looking for a new profession. It’s a true failure. Yet shockingly, “Stag Night” has some fans. It’s not highly regarded by anyone, but there are those who consider it to be harmless horror fodder. But obviously I am not one of those people. Everything about “Stag Night” annoyed me, both as a horror fanboy and a fake critic.

Nudity: None, but there is a heavy petting scene and the cannibals look like they’re going to rape a chick (but are interrupted).

Overall: Save yourself a headache and avoid “Stag Night”. Even its (few) fans don’t seem to think that much of it.