(Written and Directed by Anthony DiBlasi) 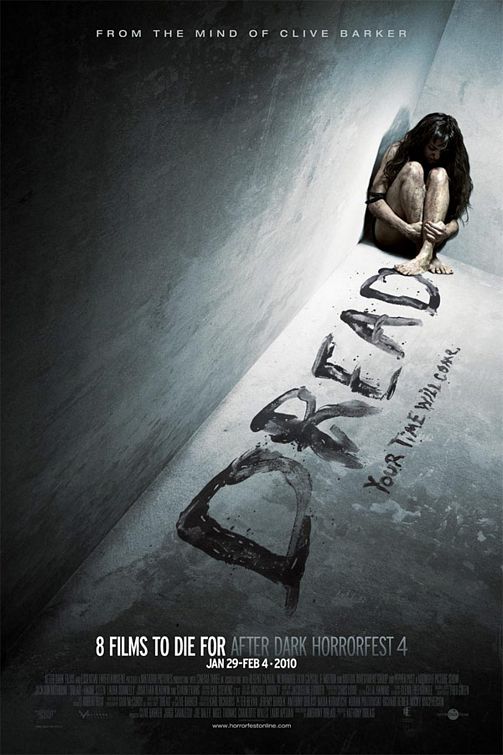 Plot: A troubled young man (Shaun Evans) who witnessed the brutal murders of his parents, convinces two film students to help him make a documentary about fear.

“Dread” isn’t the horror movie that “After Dark films” made it out to be. Instead, it’s a psychological thriller that occasionally trespasses in horror territory. You should know that, if you wish to maximize the your enjoyment level surrounding this. All I knew based on the plot summaries was that it was based on a short story by Clive Barker (“Hellraiser”) and it was about a madman who uses peoples fears against them. I expected a group of victims to be trapped in a sinister house, where the villain would’ve created scenarios that would force them to experience their deepest fears. Or maybe something supernatural, as Clive Barker and the supernatural are a faithful couple. Much to my surprise, “Dread” was more about the victims themselves than it was about them being victimized. Believe it or not, that doesn’t automatically cement “Dread” as a success, but you’ve got to respect the effort.

As a character oriented movie, “Dread” did occasionally test my patience. The characters often come across as pretentious douchebags, using unnecessarily advanced terminology in order to seem intelligent or deep. Seriously, some of the shit that comes out of their mouths is pretty goofy. “The dark behind the door” is used to describe fear. Luckily, there is a self-awareness about it. It never borders on satirical, but I started to get the impression that the characters knew how absurd the dialogue sounded. Once I got used to it, my annoyance level began to diminish and I actually begin to appreciate the dialogue. Some of it turned out to be pretty inspired for a horror flick.

The characters themselves are pretty interesting. I like how no one is completely one dimensional. Stephen’s (Jackson Rathbone)- the protagonist- biggest weakness is that he seems to be a bit of a push-over, but they don’t take that too far. He’s perfectly willing to push back if he feels like it. Quaid (Shaun Evans) alone is responsible for a lot of the suspense. Immediately, there is something untrustworthy about him. Yet he also has a horrid past, so it’s hard not to feel bad for him. Furthermore, he has enough moments that at least partially redeem his lesser pleasant aspects, so you’re not sure if he will turn out to be friend or foe by the ending. The fact that he could snap at any moment is enough to keep you on edge. The other characters are pretty endearing and their plights make them more than sympathetic, but they also have moments of unpleasantness too, so they aren’t ‘just’ nice. They felt like actual people instead of movie characters.The acting is surprisingly good too, filling the shoes for said characters nicely.

The problem is that the narrative is very…loose. The majority of the screen-time is dedicated to characters talking, having sex, filming characters talking and almost filming each-other having sex. There reaches a point where the story starts to become redundant. How many times do we see need to see characters partying? Or people discussing their fears? Or Quaid apologize to Stephen for being an asshole, which will be inevitably followed up with Quaid being an asshole for something else? Every once in awhile, they’ll throw in a nightmare sequence where Quaid is hunted by an axe wielding serial killer. While these scenes are fairly effective, sometimes they’re treated as an afterthought. It’s as if the director was trying to reach a quota so the trailer would have enough footage to be marketed as ‘horror’.

Speaking of which, the ending was pretty cool, but I can see it polarizing many viewers. I’m going to bring up a 2008 film called “Splice” for comparison. That was purely science fiction with a few thriller elements, but the finale transitioned into full blown horror. Many felt that the 3rd act was too conventional for that reason and many others wished the entire movie was like that (I am in that camp). I can see the same argument being used against “Dread”. The majority of the running-time is dedicated to ideas: How much does fear dominate us? As I’ve said, it was mostly a psychological thriller. But the finale is 100% horror. More specifically, it can be argued as torture porn or a grim slasher. Personally, I thought it was an appropriate ending. It’s dark, edgy and I was invested. But you should be aware that there is a likelihood that you won’t appreciate it as much. If you want a psychological thriller, you might be turned off by the sudden spurts of gore. If you want a slasher, you’re going to be bored until the gory parts finally become prominent. But if we were to critique this objectively…

To me, “Dread” struggled because while it was ambitious, it wasn’t focused. Why did we need scenes of Stephen partying with Quaid? I suppose it was showing how Quaid is a bad influence on Stephen. But for this to have maximum impact, the backbone of the script needed to focus MORE on these guys. Instead, they throw in a girl with a birth mark. It’s to showcase more of Quaid and Stephen as individuals and the girl was interesting, but her inclusion didn’t strike me as necessary. Or what about that teenager who was deaf? They keep these characters around ‘enough’ so that they become obtrusive to the story, but not long enough to where they feel organic to it. This could’ve worked, but the writer/director lacked the skill to completely pull it off. Even worse, there are a lot of scenes that really didn’t go anywhere. Did I miss something, or why did they have to make a sequence involving Quaid attempting to get a stripper to model for him? Stuff like that took away from the films story, characters and themes. Because of this, there wasn’t enough room to include the content that mattered. Why characters do certain things by the time the ending rolls around doesn’t make a lot of sense, because the director got caught up in filler. Props for trying Mr. Director, but “Dread” just isn’t as good as it wants to be.

I’m not going to lie. I was kind of bored while watching “Dread”, but I think I’ve begun to understand what it was aiming for now that I think about it. I’d prefer this over the highly conventional “Wicked Little Things” or the bad-writing plagued “Cyrus: Mind of a Serial Killer”, simply because there is some intelligence to be found here. But the problem is that I suspect the director wanted to make an artsy, indy, psychological film that stressed its ideas more than anything. But there’s not a market for that and he was making a picture for a horror-themed studio, so he had to add in more ‘scare’ scenes to appease the higher-ups. Or perhaps he just wanted to make a different kind of horror film. Regardless of the reason, I don’t think it completely worked out. But it’s not a failure either and I respect it for trying.

Nudity: Rated R. Quite a bit.

Overall: Consider what I’ve said about “Dread” and decide whether or not it’s for you. I’d say technically, it’s decent.