(Written and Directed by Mark Vadik) 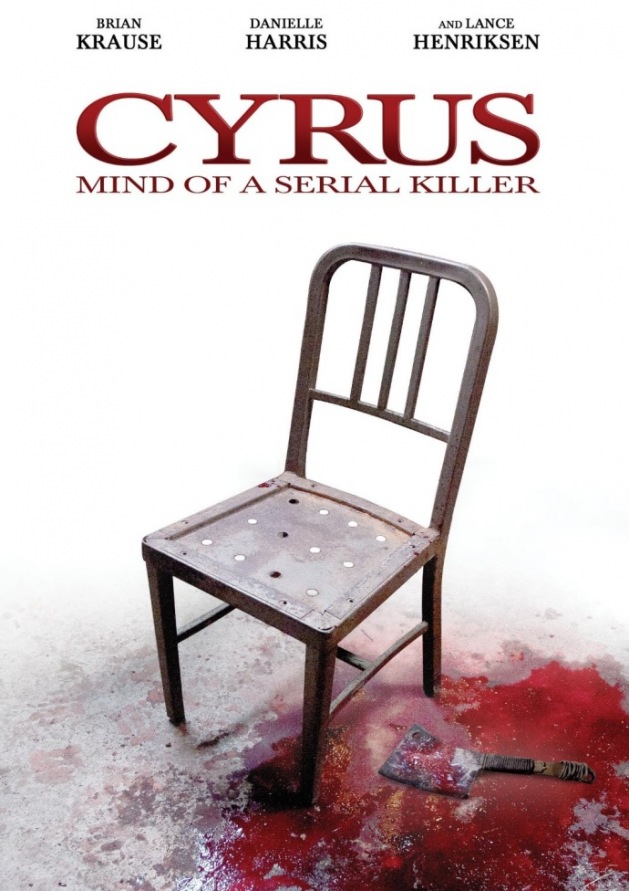 Plot: Maria (Danielle Harris) is a loud, independent reporter who wants to do a big story for her television show, “Last Steps”, which is about serial killers. When she’s contacted by an old dude named Emmett (Lance Henriksen), she thinks she’s discovered the tale of a lifetime. Emmett apparently knew a notorious serial killer named Cyrus (Brian Krause), who cooked his victims and sold them in his diner. Emmett relates the story of Cyrus, from his tragic past to his time as a vicious murderer.

I’ve had “Cyrus” on netflix now for about three weeks, but could never gather up the courage to give it a look. The reviews weren’t very good, nothing about the premise jumped at me and my last experience with “After Dark” studios was not a happy one (“Wicked Little Things”). What’s annoying about my latter point is that “Cyrus” doesn’t even belong to that studio. When somebody requested that I review it, it was lumped in with other “After Dark” productions, so I naturally presumed “Cyrus“. To make matters more confusing, it shares the same title as a comedy starring Jonah Hill and John C. Reilly, which came out in the same year. I was wondering why someone would want me to watch that. When I finally worked up the courage to watch it, events beyond my control interrupted me. I hit the button for the disk tray to open on my DVD player, but it wouldn’t, which means I AM DOOMED TO WATCH STEVEN SEAGAL’S “On Deadly Ground” FOR ETERNITY! NOOO! So happiness did not shroud this movie but I finally got a working DVD player and viewed the beast. “Cyrus” is one of those movies that’s full of flaws- all of them being amateurish mistakes- but it isn’t without inspiration either.

While the script of “Cyrus” has its fair share of cliches, unlike “Wicked Little Things” (why am I still contrasting the two?), it was not fueled by them. There is a lot of dark and disturbing content within the film. It boldly deals with rape, child cruelty, animal cruelty, torture and cannibalism without ever really descending into pure sleaze. It instead opts to leave a lot to the imagination, which probably makes it even more unsettling. Take the rape scene for example. There’s no nudity. It’s never meant to titillate, it’s meant to be uncomfortable and sad. The willingness to break taboos earned my respect because it’s actually sort of…I don’t know, tasteful about it. We’re not talking “The Human Centipede 2”, where everything is just too explicit and exploitive. Here, the camera turns away at the right moment and relies on sounds, I feel makes the movie creepier. 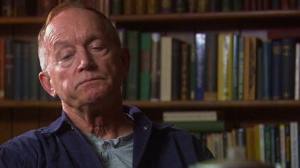 The story in general, once it gets going anyway, is surprisingly compelling. Sure, I took some issue with how over-the-top Cyrus’s back-story was. It’s even more jarring because it seemed like they kept changing his past as the movie progressed. When he’s first introduced, the only signs of mental instability come from his past as a POW and it gets worse due to the treatment of his wife. Most serial killer movies reveal that their predators were themselves the victims of abuse- by parents, spouse or strangers-, but “Cyrus” decided to have its titular character be tormented by all of the above. His Mother treated him horribly and openly said she hated him. His wife wasn’t any better and flat out cheated on him. He was tortured in a prison camp while he was in the army. He was molested as a kid, etc. While yes, all of this contributed to making him a monster, the movie isn’t sure what piece of his history it wants to focus on the most. They keep showing flashbacks to his Mother, but there’s no context for them. The POW aspect is dropped after it’s brought up and you don’t find out about any child molestation until the very end. But at least his story was never boring. I was interested in all of the proceedings and sometimes I was even biting my nails from the suspense. I liked how minimal the direction was. Mark Vadik (the director) focuses on building tension, but never gets in the way of his script. My only complaint directed at him- as the director- is that the lighting could’ve used some work during the basement sequences. In fact, whenever there isn’t meant to be a lot of light (because it’s night or whatever), I had difficulty seeing what was happening. Other than that, his direction was competent, if a bit unexceptional.

Unfortunately, while Mark Vadik’s successes are impressive, they are more-or-less matched by his failures. One thing that stood out about “Cyrus” is it has a lot of moments that are fairly artsy, but have become overused and trite over the years. The biggest example is watching Cyrus- just after committed his first on-screen murder- holding his baby. It’s supposed to be ironic because a murderer who is covered in the blood of his victims, is holding the infant so tenderly. I’ve seen that too much to be effected by it anymore. There are a lot of sequences like this. That, along with some overwritten dialogue, makes “Cyrus” look less like a good movie and more like a sub-par movie that thinks it’s hot shit. Occasionally the movie will cut to psychiatrists who deliver trivia about serial killers, which is pointless but adds to the illusion that the film is thought provoking. The film is just sucking its own dick. But this in itself could’ve been forgivable had the movie had a better ending. The conclusion of “Cyrus” is glaringly predictable. You can see it coming from the first five minutes, but what’s worse is how dumb it is. Up until this point, the movie at least could fool someone into thinking it was smart, but the ending drops all pretenses. It’s one of those endings where its characters act unbelievably stupid in order to fulfill its conventional, horror movie finale. The resolution to the story was the only thing about “Cyrus” that angered me. 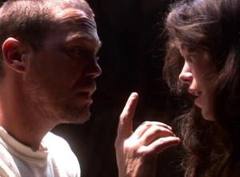 I also felt that Vadik could’ve ‘directed’ the actors a little more effectively. He had a great cast to work with, which included Lance Henriksen, Danielle Harris, Brian Krause, Tiffany Shepis and even Doug Jones. Hell, I recognized a lot of faces in the crowd too! Everyone does a stellar job and it was especially refreshing to see Henriksen put a little energy in his performance. My last few outings with the man have not been kind to me (“Hellraiser: Hellworld“) In the case of “Cyrus”, I’m not sure what is to blame here. Were the actors actually told to be over-the-top? Were they under-directed and this was the result? Or were the characters just written that way? But as Vadik was both the writer and director, I do blame him because regardless of what is at fault. Krause is chilling when he’s being low key and subtle, but when he’s in psycho mode, he acts too crazy. It’s just hard to accept that no one noticed how psychotic the guy really was. Henriksen isn’t as obvious in comparison but at times, you wonder why anyone would follow this guy into a dark, abandoned house. He’s so obviously evil. Whenever they’re trying to establish the characters, the acting becomes forced. The reporter is too arrogant, the Mother is too sadistic, the wife is too bitchy, the cop (Ben Dubash) is too ‘Dirty Harry’-ish and those city kids are punks who like to call country folk “hicks” for no real reason other than to establish them as assholes. Eventually it becomes hard to take seriously anymore.

The problem with this is that the characters cease acting like real people and become cartoonish, caricatures. When a movie aims to be disturbing and unsettling, cartoonish is a term you don’t want to hear being associated with your feature. I suspect that “Cyrus” was aiming to be “Henry: A Portrait of a Serial Killer”, but instead ended up being “The Untold Story” (except not as disgusting). But for all its faults, at least the movie works very well in parts, providing many cringe inducing moments. Plus, it is well paced, even when it is being a dumb slasher film. I was never bored and throughout the bulk of the feature, I thought it was a healthy 2.5/4 star movie. Sadly, the ending crippled my enjoyment of it, so I’m going to be a little harsh. “Cyrus” isn’t bad, it’s just not as good as it wants to be.

Violence: Rated R worthy. What we do see is rather vicious.

Nudity: Yeah there is some. There’s a consensual sex scene and a rape scene.

Overall: If you like movies that follow the serial killers, I’d say “Cyrus” is worth a look but don’t expect anything exceptional.