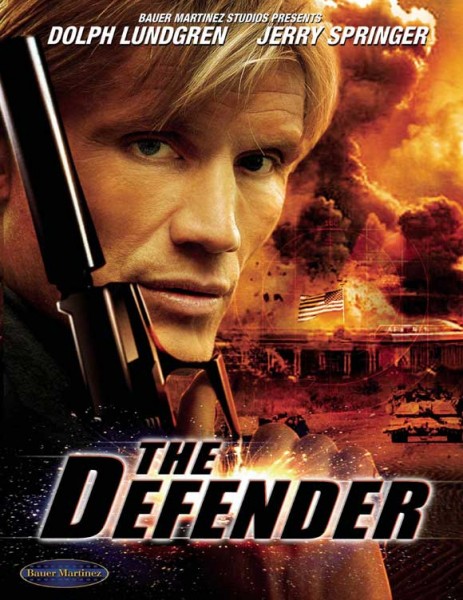 Plot: Lance Rockford (Dolph Lundgren) is a special agent assigned to protect the head of National Security, which becomes difficult when they are ambushed on a secret mission in the middle of nowhere.

“The Defender” should’ve been a complete disaster, but it ended up being a very important movie for a…not-so-important action star. By 2004, Dolph Lundgren had successfully beaten the crap out of his fanbase- not that he was ever a major solo draw to begin with. His weapon of choice during this assault? Shitty movies. Some of us limped to Steven Seagal, not realizing that we had just exited the frying pan and entered into…Seagal’s stomach…which eventually lead to us hatching an escape plan where we fled through Seagal’s anus…True story. What I’m trying to say is that between 1998-2003, Dolph Lundgren was the Steven Seagal of his time before Steven Seagal became the Steven Seagal of his time. “The Defender” was actually the beginning of his redemption phase, where the quality of his filmography drastically increased to being…mediocre (and “In the Name of the King 2“). Sidney J. Furie was originally set to direct, which made sense as he had previously worked with Lundgren on “Direct Action“, which was regarded as the best movie Dolph had been involved with in years- and it was also regarded as supbar. Unfortunately- or fortunately, depending on whether or not he was bringing his “Superman 4: The Quest for Peace” game- he got sick during pre-production and was forced to leave the project. In a bold move, Dolph Lundgren stepped up to be the director. His more successful rivals had tried the same thing and the general consensus is “On Deadly Ground” was the first step towards ending Steven Seagal’s career and “The Quest” was just another nail in Van Damme’s coffin. But once you star in “The Last Patrol“, you can safely say that your own career is in a post apocalyptic wasteland and Dolph…sort of headlined that stinker. Yet once people unanimously praised “The Defender” as…tolerable, Dolph had finally found his niche. He would then steadily direct at least 50% of his movies, all of them also being…tolerable…I think Lundgren genuinely enjoys directing and tries his hardest, even when he doesn’t always achieve the desired effect. It’s that effort that keeps me glued to his work, even if none of them provide me with enough new material to talk about.

And I love how I spend all this time on setting up the importance of “The Defendor“, but I won’t spend that much time talking about the content…because it’s back-story is more interesting than the movie itself. Because it is…tolerable.

The action is pretty simplistic, just traditional gunfights mixed in with the occasional hand-to-hand beatdown and Lundgren’s direction isn’t especially stylish, nor is the choreography anything special. Yet I can’t complain about the cinematography or editing, which never muddied up the battle sequences. I can sum up the action as competently executed, with the only minor pet peeve being the way the actors held those guns. No one looked like they had any idea how to carry them, which is strange because Dolph has made a career of carrying them and should know better. But even if the action is standard, there is A LOT of it. The opening act is rather slow, especially during that mundane sequence where the agents are just milling about, waiting for something to happen. But once it starts, it never stops and “The Defender” is incredibly well paced. It chose the perfect times to take a breather, so it never burned me out, but it never got stuck in tedious character drama. There was always a battle right around every corner. I liked some of the little touches, such as the bad guys actually pulling their fallen comrades out of the line-of-fire. You usually don’t see that kind of valor amongst villains, so that was unique. “The Defender” might be my favorite Dolph Lundgren directorial effort because it’s not trying to misguidedly show off Dolph’s acting chops, nor is it quite as bleak as the majority of his other works. The colors aren’t as muted, the tone isn’t as depressing and Dolph Lundgren doesn’t always have that ‘haunted’ look in every scene. His acting is fine here and he gives himself a decent amount to do without relying too much on his dramatic capabilities. I also appreciated how the action becomes more intense as time moves along, with the audience never being able to forget that the heroes lack the resources of their villains. My final real praise is that while there isn’t much character development, all of the characters manage to stand out in their limited screen-time. 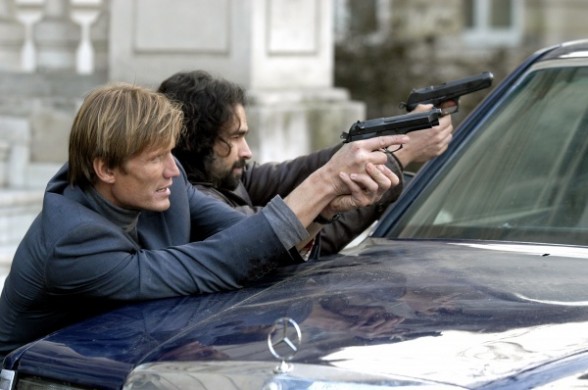 There are certainly some flaws though, like the score…God damn it, the worst scene in the movie had to be during that aforementioned ‘agents milling about’ segment, primarily because the music sounds like it belongs in a porno. When Lundgren’s character is talking to Kaye (Shakara Ledard), I thought they were about to have sex right there just because of that damn music. I never felt like the score mixed well with the visuals and sometimes it was very distracting. The tone occasionally was a bit wonky, where characters will have an amusing reaction or say something ‘funny’ during an otherwise intense sequence. I attribute most of these weaknesses to Dolph’s inexperience, as his subsequent works have better music and a more stable tone. The biggest failure, however, is that the story is often at war with the spectacle. “The Defender” has a very cool scenario to work with and I love the sense of mystery surrounding the plot. We see that the President (Jerry Springer…yes, THAT Jerry Springer: Whose acting is pretty solid) is involved, but we aren’t sure how. We aren’t sure why everything is happening, but we feel like it’s building to something important. The problem is that important pieces of information are dropped in the middle of action sequences, with the dialogue often being drowned out by the sounds of explosions. I was often like: “Huh? Why? The F@ck is going on?!“. Even now, there are some things I want to call loose ends, but I suspect that the writer did tie them up nicely. It’s just that it’s hard to pay attention to people talking while everyone else is fighting all around them and the direction seems more interested in the fighting than the talking DURING important exposition dumps. But “The Defender” was a reasonably fun, if unremarkable experience that helped reignite interest in Dolph’s sagging career. He has definitely improved as a director, but I have a very big soft spot for his directorial debut because it fits more comfortably within my taste boundaries.

Nudity: None, but that porn-ish music…I feel like there should be some.

Overall: “The Defender” is fairly entertaining, although it’s really only for Dolph Lundgren fans like myself.