(Written by Ed Horowitz and Robin U. Russin)

Plot: Forrest Taft (Steven Seagal) is…lol, his name is Forrest Taft? Okay…He’s an environmental agent working under Mr. Jennings (Michael Caine), the corrupt CEO of an oil company in Alaska. He’s allowed himself to become their tool until he discovers that Jennings intentionally is using bad parts in order to get a construction site completed in time. If he doesn’t finish it, he’ll lose the rights to the land. When Forrest confronts Jennings about it, Jennings attempts to have him killed. Now Forrest must go through a spiritual journey where he realizes how much oil hurts Mother Earth, so he has to stop the company once and for all…by killing everyone.

I am finding it difficult to type up a review of Steven Seagal’s “On Deadly Ground”, because every time I think about it, I start snickering. This evolves into full-on laughter. Then I remember that I have to review the movie, but the process continues. Seagal had previously appeared in the big budgeted “Under Siege”, which propelled him into A-list stardom, so was given free reign for his next project. That was a mistake, because he made “On Deadly Ground”, a movie so bad that it has since become legendary. It’s often considered the beast that killed Seagal’s career, although that isn’t entirely true. Did it begin the slide? Probably, but “Glimmer Man”, “Fire Down Below” and especially “The Patriot” were intended to be big features and bombed harder than this one. Even the highly anticipated “Under Siege 2” underperformed. “On Deadly Ground” is just as bad as everyone says it is, but I kind of like it. Everything about it is so silly that I spent the bulk of the movie laughing my ass off. Hey, I can’t say the same about any of Seagal’s recent movies.

Let’s begin with the character of Forrest Taft. I can’t tell if he’s supposed to be some sort of Native American, or if he’s one of those white guys who thinks he’s a Native American. The movie calls him out for starting off as kind of an asshole and it’s easy to see why. When a fellow native is being bullied, he steps in and beats the hell out of everyone in the entire bar. In some cases, he clearly breaks some bones too. I’m all for taking down some bullies, but he went too far. He then spews out some pretentious BS about being a man, so apparently Seagal is supposed to be ‘deep’. But this doesn’t jive with him being a corporate bitch and we learn that this is the reason why he’s an asshole. It’s not because he just kicked the shit out of everyone in a bar, it’s because he works for an oil company. This in a way represents “On Deadly Ground“s failure. It has its priorities completely mixed up. 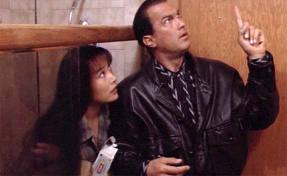 Now I have nothing against the films message, even though it is very preachy about it. Seagal has plenty of rants about how we’re killing the planet, culminating in a final speech that originally was 11 minutes long (!!) before poor test screenings forced Seagal to trim it down (still way too long though). It gives the film an air of pretentiousness, but that’s not really my point. What I found most baffling about the movie is how it’s apparently a bad thing to harm the planet, but it’s perfectly acceptable to go on a killing spree. Now self defense is one thing, but Forrest seems to go out of his way to murder people. He takes no prisoners and we aren’t even sure if all of his victims were in on Jennings’ plot in the first place. SPOILERS BEGIN HERE- Speaking of which, I don’t think I’ve ever seen a protagonist go out of his way to murder the villain like this. Jennings is just planning on leaving, but Seagal proceeds to murder him in an elaborate, vicious way that makes the social commentary hard to swallow- SPOILERS END HERE. I mean, I just watched the protagonist kill more people than the antagonist did, all because of oil? Is this the spiritual journey that the Chief put you on? That it’s okay to slaughter everyone who gets in your way? Somebody is confused…

The rest of the movie is just kind of incompetent. The dialogue is silly, generally because it tries too hard to serve Seagal’s ego or wants us to consider the social themes. This movie has two “He’s your worst nightmare” speeches, designed to showcase how amazing Seagal’s character is. The script has a lot of pointless diversions that go nowhere, such as the FBI showing up only to promptly leave. Forrest has that spiritual transformation sequence where he’s supposed to learn something but as I said, that only leads to him going on a massacre. Something tells me that was not supposed to be the intent. The portrayal of Native Americans is sort of racist, albeit in a well intentioned kind of way. Seagal’s direction isn’t terrible, but the only parts that stand out are the awkward moments, like when he uses slow motion while everyone says “My nuts!” or “My balls!”. But do you see a pattern here? I’m more amused at how awful this is than angry. It’s so…bizarre, that you almost wonder if it was meant to be taken seriously in the first place. That makes the film hilarious. 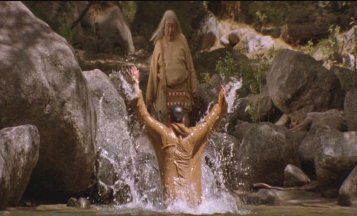 Not all of this is guilty entertainment though. Sometimes the spectacle is rather impressive. Seagal had a lot of money to work with and he utilizes it pretty well. There are a lot of wide shots and nice looking locations. The set pieces are pretty fantastic and blow up nicely. Plus, he hired a respectable supporting cast. Michael Caine does great. I hear that he and Seagal did not get along (surprise), but he’s too much of a professional to let that get in the way of his perfoymance. You love to hate the guy, but at least you know where he stands. Forrest is a freaking psychopath who just pretends to be a hero! Plus, Caine gets the commercial scene, which happens to be my favorite moment in the entire film. I also liked R. Lee Emery (Stone) and John C. McGinley (MacGruder), who both deliver deliciously over-the-top performances. Hell, Steven Seagal himself doesn’t do bad because he still had fire in his performances at that time. Say what you will about the movie, but at least Seagal was still trying his hardest and he has a lot of energy. Too bad that his dialogue was the worst. I’m not really sure why Joan Chen was here and she doesn’t do anything other than stand around and look hot. Wait, did I just answer my question? Finally, the film does have a pretty intense ending. The violence is hardcore, the explosions are epic and the stunts are pretty good. But Seagal treats all of this like it’s a bonus. He’s more interested in the talky scenes.

I personally believe the movie is about a crazy dude who turns into a hippie, but freaks out after doing drugs with the Native American tribe and goes on a rampage against corporate America. Since Steven Seagal obviously created the movie with different intentions, that’s part of the reason I enjoyed this. It strives for greatness, but mucked up every step of the way. Yet Seagal’s unflagging enthusiasm for the project- both as a filmmaker and as an actor- gives the film some life. Had I seen this movie back in 1994, I probably would’ve hated it about as much as everyone else. But that’s because he had previously done good movies, like “Under Siege” and “Out for Justice“. But this is 2012 and his output is much different. Now that Seagal’s films are so forgettable and boring, “On Deadly Ground” actually stands out as entertaining, even if it’s often for the wrong reasons. I’m giving the film 2 stars, but only because I don’t like giving higher ratings to movies that even toy with being “so bad, it’s good“. In it’s own way, it still brought me joy and that is what matters.

Note: I am listing this under “martial arts” because Seagal breaks out his aikido skills from time to time.

Violence: Rated R. This was before the 90’s started to suck, so movies could still be very gruesome.

Nudity: There is a fair amount of it during a dream sequence.

Overall: “On Deadly Ground” might be bad, but at least I had a lot of fun teasing it. Sometimes it even impressed me, but you have to know what you’re getting into if you decide to give it a look.