Plot: Granger (Dolph Lundgren) is a Karate teacher who’s haunted by memories of his days as a Special Forces soldier. But he gets the chance to redeem himself when he’s forcefully transported back in time to the medieval age. To get home, he must slay an evil witch and save the Kingdom.

Ever since Dolph Lundgren began working within the realm of direct-to-DVD movies, he’s produced a string of acceptable but unexceptional genre flicks (like “Missionary Man“). They might be crudely made, with bland action sequences and plodding scripts, but you can see a lot of effort being put into them. This alone makes him worth watching, as I do believe someday he will release something special. I’d like to think all that effort has to pay off at some point. But it’s as if he was walking down the street one day and thinking to himself: “How can I ruin my career?”. Luckily for him, he was about to cross paths with Uwe Boll, who was notorious for his awful cinematic adaptations of video games (“House of the Dead”). Yet after falling to small screen cinema, Uwe Boll has improved his craft to where his films started to become watchable and occasionally even enjoyable (“Tunnel Rats”). Yet no one wants to see a surprisingly well made Uwe Boll movie, so Boll thought: “How can I ruin my career…again!”. It was then he and Dolph made eye contact and history was made…”In the Name of the King 2: Two Worlds” was born, because nobody wanted it- although at least they had the decency not to call this “In the Name of the King: 2 worlds”.

Okay, in actuality, Dolph came on board because he was getting a divorce and needed the cash. As for why Uwe Boll did it…why wouldn’t he do it? Plus, he had already damned his career when he made “Bloodrayne III”. The first “In the Name of the King” was pretty bad, but it was merely ‘pretty bad’ compared to the legendary badness of his previous flicks. Certainly no one demanded a sequel, although I’m pretty sure nobody demanded an “Alone in the Dark 2”…or “House of the Dead 2”…or “BloodRayne II”…or “BloodRayne 3”…Christ, they’re making an “In the Name of the King 3”??? Okay, who besides me keeps watching these movies?! Although I’m kind of interested in “Seed 2“… Anyway, “In the Name of the King 2” is bad, but much like its predecessor, it’s just generically bad. It’s what I expect out of a direct-to-DVD, low budgeted sequel to a movie that wasn’t even good to begin with- regardless of Uwe Boll’s involvement. If anything, Dolph Lundgren’s surreal performance was sometimes entertaining…But the key word is ‘sometimes’. Usually I was just kind of bored. 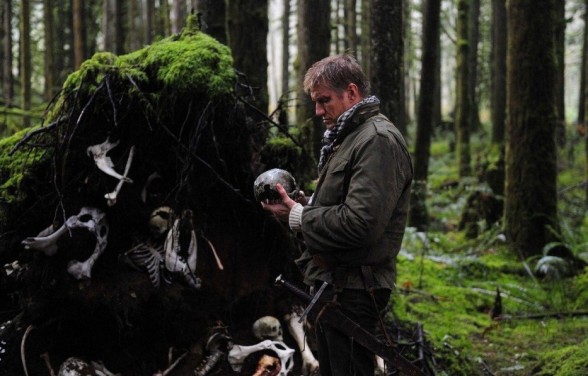 I actually have to give credit to this sequel for trying something different. I imagined a few scenarios for the story, but none of them involved the present day. It opens with these ninja dudes chasing a sorceress in the woods and their attire suggests it takes place in medieval times. But it ends with the revelation that they are currently fighting in 2011, which sort of reminded me of the ‘out of the jungle and into the city’ opening of “Predator 2”- although not as cool. Unfortunately, any semblance of cleverness that scene might’ve had dissolves immediately after that. Very little of “In the Name of the King 2” stands out as atrocious, but none of it can be argued as good either. It’s just kind of stale, but what makes it almost tolerable is that the production values are significantly superior to “Bloodrayne III”. Sure, it’s very low budget. The CGI is terrible, the costumes don’t look authentic or even stylish and there is one real ‘set’ (a crummy looking fortress, which the film even lampshades), the remainder of the locations being the woods. But at least it looks like they shot it with a real camera and used proper lighting. It resembles a normal, low budget, direct-to-DVD movie, whereas “Bloodrayne 3” was so ineptly shot and lit that it felt more like a bad student film- and by bad student film, I mean bad student film produced by high schoolers. I hated that movie so much that I swore off Uwe’s films, only taking this one on because of Dolph’s presence. “In the Name of the King 2” might be bad, but I don’t feel that much vehemence towards it.

Even if the story sounds kind of interesting when spoken aloud, the plot itself is very poorly written. The twists are obvious, the characters are highly conventional. Dolph doesn’t want to be involved, the love interest (Natassia Malthe) is feisty, there’s an asshole who creates conflict with the hero every time he can, etc. Any character development is forced (why did Dolph change his mind again?, Why did the asshole suddenly become friendly?) and the relationships are predictably shallow. Characters exposit information they shouldn’t be able to know and the ending is painfully abrupt and unsatisfying. The film is very talky and kind of slow, although amazingly, the pacing doesn’t burn itself out prematurely like its predecessor did. The problem is that a movie which relies on dialogue needs good dialogue, and the dialogue sucks. They’re obviously trying to use an old, English dialect, but it sounds incredibly phony. It’s obvious that the writer is using words which sound medieval without having a clue as to how they actually spoke back then. This cripples the acting, because it’s difficult enough to deliver these lines with a straight face, much less being allowed to act while saying them. Although something tells me that even if the dialogue was passable, the performances still would’ve sucked. I’ve come to the conclusion that Natassia Malthe just can’t act. Her line delivery at best is wooden, at worst is robotic. I did like Lochlyn Munro as the King though. It’s an odd casting choice, but he’s entertaining and manages to sell his lines…usually. As for Dolph…well…. 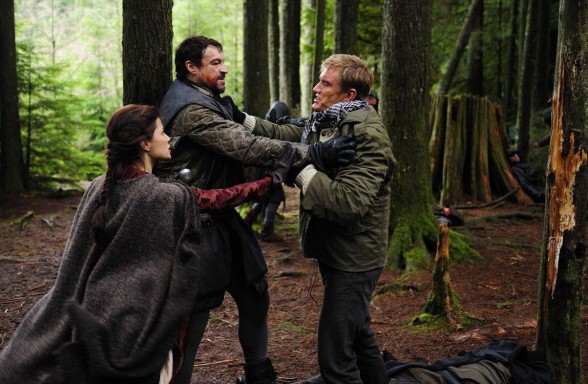 My favorite part of “In the Name of the King” was watching Jason Statham sleepwalk through the entire movie. His performance was interesting because he looked like he had just woken up from a night of hard partying only to realize that in his drunken stupor, he signed a contract to be in an Uwe Boll movie. His delivery is part “What have I gotten myself into?” and part “I am going to fire my agent and then murder him”. “In the Name of the King 2” has Dolph Lundgren and shockingly, he doesn’t look embarrassed…at first. During the first 15 minutes, I thought Dolph was doing incredibly well. He showed a variety of emotions and was having fun, which is a nice contrast to his usual roles (where he’s stoic and kind of boring). But his performance begins to fall apart when he is sent back in time. Instead of conveying shock at being teleported to another world, he looks more like Dolph the actor just walked onto the wrong set. He seems confused and a little amused at what’s going on around him. He also appears to be stoned half of the time. I swear when Dolph hears some of the dialogue, it looks like he’s trying not to crack up with only partial success. It’s very strange to watch, but occasionally Dolph’s acting made me laugh…I’d take that over boringly bad, which sums up most of the movie.

I am grateful to Uwe for having Dolph perform actual martial arts, something Dolph doesn’t seem to want to do in his own movies…or here is a thought, is Uwe a better action director than Dolph is? Maybe, but while the action scenes are too jittery to be enjoyed, I’ve seen more incomprehensible combat in big budgeted, theatrical releases. Really, the battle sequences aren’t bad at all. Fuck this films sense of humor though! The main source of comedy is Dolph using modern day lingo in medieval times. So when he says ‘we’re screwed’, he has to explain it to them and suddenly they’re using that same term in the most awkward fashion imaginable. Maybe I could’ve accepted it if my brain wasn’tb eing invaded by Martin Lawrence “Black Knight” flashbacks. *shudders*. These jokes are annoying, but occasionally I would laugh at the unintentionally amusing stuff. When the fate of the world is determined with a fight between a pan and a flashlight, comedic gold has been created.

The problem with reviewing an Uwe Boll movie is you can never really do it justice. You can spot a problem in nearly every scene, but if you linger on them too much, you make the movie look much worse than it really is. “In the Name of the King 2” sucks, but no more than most direct-to-DVD sequel fodder. Uwe Boll has helmed FAR WORSE films in the past. I’d say it’s on par with “Bloodrayne 2”, which is neither a good thing or a bad thing. Both films felt too ‘small’ in scale and it’s obvious Boll didn’t have a lot of money to play with. But at the same time, everything is competently executed enough to where it’s not unwatchable…while at the same time, none of it is good enough to make it worth watching.

Nudity: There is an off-screen sex scene and mentions of intercourse.

Overall: “In the Name of the King: 2 Worlds” (okay, now I think they should’ve done that. It would’ve been funny) isn’t as atrocious as I had feared, but it’s not worth watching either. Dolph fans, just go watch “One in the Chamber”. Uwe fans, you don’t exist…