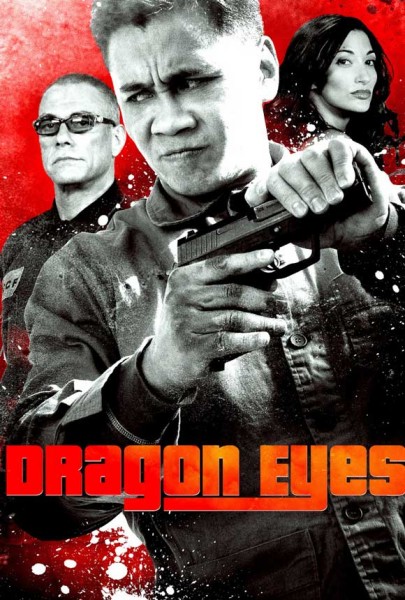 Plot: Hong (Cung Le), a mysterious fighter trained by the enigmatic Tiano (Jean-Claude Van Damme) in Prison, wanders into a corrupt town full of gangs, drugs and corrupt officials. His motivations are unclear, but one thing is for certain: he’s going to kick some ass.

“Dragon Eyes” might boast Jean-Claude Van Damme’s name on the poster, but he only really gets a glorified cameo that probably does not amount for more than 10 minutes of screen time, although it’s spread out so smoothly that he feels fairly prominent. This is actually a starring vehicle for Cung Le, the former MMA competitor turned actor who was awesome in “Pandorum“. I was surprised when he started talking, as I always presumed he couldn’t speak English, considering he didn’t use any in “Pandorum“, “Tekken” or “The Man with the Iron Fists“. I was curious to see how he would handle himself and knew that Van Damme’s role was limited before popping the DVD in, so my low expectations might’ve elevated the movie higher than it deserves. “Dragon Eyes” wasn’t very well received by those who bothered watching it and I can certainly see why. The script is a mess, Cung Le can’t act, the visual style is unappealing and the ending is terrible, but…I saw effort. I felt like the filmmakers were trying their hardest to deliver an engaging story and have a unique look, but it just wasn’t working out. I respect that, although I’ll also admit that the abundance of pretty cool fight scenes allowed me to admire its strengths without getting bored.

Discussing the script is going to be difficult because what “Dragon Eyes” does wrong is plentiful, but at least it wasn’t bland. The only real conventionally dull element of the script comes in the form of the love interest, whose name I didn’t bother to remember because her own movie seems to forget that she existed in the first place. She appears sporadically to have ‘romantic chemistry’ with Hong, but unfortunately it is nearly impossible to have any kind of chemistry with a wooden plank like Le. Plus, she vanishes for long periods of time, so it’s impossible to adequately develop her or the love story. When she shows up as the damsel in distress in the end, I was like: “Oh yeah, she’s in this movie too, isn’t she?“. Otherwise, the badness of the writing is so bizarre and unique that it almost contributes to the films identity. The passage of time makes it very difficult to tell what is going on. The film opens with Hong moaning in pain, which happens shortly before the third act, so everything present in the first two acts is ‘how we got there’. That’s fine, but then Hong has flashbacks within these apparent flashbacks, focusing on Hong training under Tiano. Then Tiano starts having flashbacks within Hong’s flashbacks that are already taking place during other flasbacks, which is pretty hilariously terrible writing, but the problem is finding out what is happening when. Based on the presentation, I actually thought the prison scenes were supposed to take place in the present, whereas the inner-city scenes were flashbacks, but it’s the opposite. “Dragon Eyes” then really takes a surreal turn when Hong is arrested in the present, so there will be present AND past scenes where he is in jail. Eventually everything will start to come together, but since John Hyams doesn’t clue you in whenever the time period is changing, expect to be confused for the first half. The ending is outright terrible on multiple levels. The final battle in itself is okay, if a bit underwhelming, but you’ll find yourself wondering why none of the villains are carrying guns. Then other villains show up with guns, but where were the rest of the gangs? What happened to the money? There are so many unanswered questions and characters start doing unbelievably stupid things, making me wonder if there were some severe budget cuts near the end of production as everything is resolved too abruptly.

But to Tori’s (the writer) credit, he does have some ambitious ideas. At first you’re thinking that this is a simple revenge story made convoluted by some baffling storytelling decisions, but the ambiguous passage of time was intentional. There is a reason “Dragon Eyes” wants to throw you off guard, because underneath this stupid writing rests some pretty shocking twists. The filmmakers do play off your expectations and I liked where the story went…at times. At first, Hong just seems like a vigilante, but then his ploy is brought into the open early on and he ends up becoming a crime boss as well. Was this his plan all along and his early spectacle was nothing but a calling card? Is he trying to redeem these gang members into becoming decent people? Or does he intend to use his position to take them all down? The mysteriousness of the protagonist works in the films favor as he will always keep you guessing. The problem is that just when things start to get interesting, the rug is pulled out from under our feet. One moment, Hongs plan is beginning to take off and the next…It’s over. Apparently the villains figured everything out…off-screen. What the hell? That’s unsatisfying! While “Dragon Eyes” borrows a lot from “A Fistful of Dollars” and even appears to pay tribute by having Hong wear a Poncho (!!!; which is why I don’t credit “Sanjuro“), it also has its own story threads. So I disagree with the ‘rip-off’ complaints. I think the bad within the writing of “Dragon Eyes” outweighs the good, but I believe the good does deserve some mention. If anything, I’d rather the crazy misfired writing of this movie than the boringly bad writing of your typical direct-to-DVD movie.

The acting was rather strange, because the styles of bad acting are very different and seem to be intentional. I can’t tell if “Dragon Eyes” is intended to be satirical because while the director is being cute with the tone, I couldn’t figure out what exactly was being riffed. The grainy film quality and opening titles are reminiscent of Blaxploitation, but what Blaxploitation flick has asian and white protagonists? The only blacks were the villainous gang members. The stylistic cues of that formula dry up almost immediately. But the majority of the acting is so over-the-top that I don’t see how it can be taken seriously, even though the movie often makes the mistake of taking itself too seriously. I’ve made fun of Cung Le a bit because he has no charisma, although his acting isn’t terrible. His line delivery fell flat, but he’s not bad enough to bring everything down around him. Van Damme worked well as his mentor and Peter Weller has a blast as Mr. V. Well had some of my favorite lines and stole the show. Everyone else oversells their emotions so intensely that once again, I can’t tell if this is intended to be some form of parody. The bit with the two junkies was pretty funny and annoying at the same time, but everyone yells too much…or don’t bother emoting at all. There is some clever dialogue,. but its drowned out by the excessive profanity and attempts at gangsta machismo. “Dragon Eyes” did occasionally give me a headache with the noise from its characters… and the soundtrack. That score was painful. The music wasn’t my cup of tea anyway, but it didn’t fit with the tone. 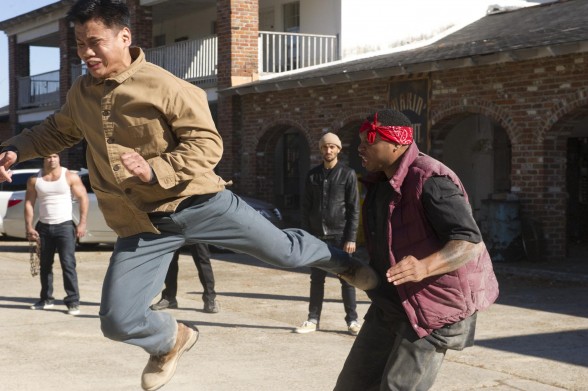 I suspect that “Dragon Eyes” was a failed experiment, although I’m not really sure what John Hyams was going for. He’s primarily known for “Universal Soldier: Regeneration” and “Universal Soldier: Day of Reckoning“, which dealt with very unconventional visual styles and story telling choices. But the difference is…they mostly succeeded in their goals. “Dragon Eyes” goes for that same level of nonconformism and it merely backfired. BUT…there is a reason to watch it outside of curiosity. The martial arts choreography is pretty damn good. There is an animalistic quality to it, an emphasis on brutal violence, relying on bone crunching sound effects and aggressive attacks that reminded me of Jet Li’s “Unleashed“. I felt all the punches, kicks and broken bones. The techniques are grounded in reality, but not in a mundane kind of way. Everything moves very swiftly and the camerawork/editing does not get in the way of the choreography- although sometimes the lighting does. There are some inspired stunts and cool shots, so not all of Hyams ideas failed. As bad as Cung Le is as an actor, he’s awesome as a martial arts performer and his ability to sell his attacks make up for his other shortcomings. One thing I liked was that until the finale, Hong never has a one-sided fight. Whether he’s taking on someone important or battling three random mooks, not all of his strikes will strike gold and he will be on the receiving end of a few good blows. It made him more vulnerable and added more weight to the action. I thought the aesthetics were rather unappealing- murky lighting, grainy film stock- and Hyams tends to draw out a lot of scenes for the sake of padding the runningtime. The ending slow motion was annoyingly melodramatic, but outside of having a third act which drags on for too long, it moves relatively well. I really liked the Van Damme bits and sometimes even enjoyed the rest. “Dragon Eyes” is a misfire, but enthusiasts for the genre can at least embrace the short length and heavy action.

Nudity: You see a pair of breasts during a brief sex scene.

Overall: “Dragon Eyes” is a bad movie, but it contains good fight sequences. If that’s all you want, then it’s worth checking out if you aren’t paying a lot.