Plot: John (Scott Adkins) witnesses his wife and daughter get killed by Luc Deveraux (Jean-Claude Van Damme), who has created a cult based on the Universal soldier program. John swears vengeance and hunts him down, while discovering his own connection to the program.

The film opens with strictly POV camerawork, shown from the eyes of John (Scott Adkins). His daughter complains of monsters during the middle of the night, so he goes to investigate. The slow burn suspense and creepy music make you wonder if you’ve accidentally put in a horror movie instead of a Universal Soldier film, but then BAM! John is beaten nearly to death by Luc Deveraux (Jean-Claude Van Damme), who proceeds to murder his wife and child. Every fan watched this scene with their mandible’s touching the floor. Luc Deveraux was the PROTAGONIST. Imagine if “A Good Day to Die Hard” opened with John McClane butchering an entire family. If this isn’t strange enough, not long after, we are re-introduced to two previous villains: Andrew Scott (Dolph Lundgren) and Magnus (Andrei Arlovski). Both have aligned themselves with Deveraux, who is their leader. So imagine “A Good Day to Die Hard” doesn’t just have John MCclane massacring a family, but Hans Gruber and…another villain from that franchise are working under him. It would be freaking weird! This alone has made “Universal Soldier: Day of Reckoning” polarizing amongst the fanbase, who found these developments to be a betrayal to the continuity. 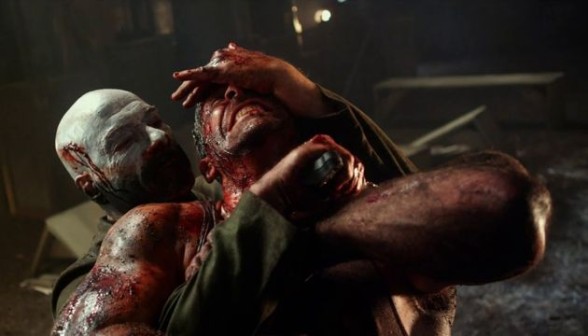 There’s nothing especially inspired about the plot itself, which borrows elements from “Total Recall“, “Blade Runner” and even “Apocalypse Now“, but it’s executed in a fairly unique way. You see, there is almost no set-up to anything. Once John is released from the suspiciously empty hospital, he is immediately thrown into this convoluted and often confusing story. Strangers appear to know him, but John has no recollection as to who they are. There’s very little context for any of the scenes. Without warning, we will be tossed into a sado-masochistic club where people nail their hands into the table. Even though “Universal Soldier” is in the title, “Day of Reckoning” is a mystery about a man trying to figure out his connection to his enemy. Key pieces of information are intentionally missing, so we’re just as lost as our hero. The final twist is easy to spot coming, but I was more impressed with how it was used. By the end of the movie, you realize that you are watching the events unfold from a much different point of view. As the narrative appears to be about Johns descent into madness- or maybe something much worse- you can’t completely trust what you are seeing or hearing. “Universal Soldier: Day of Reckoning” isn’t about these superhuman fighters kicking ass, it’s really about a characters state of mind.

The director made sure to dip every scene in “Universal Soldier: Day of Reckoning” in a bucket of pure surrealism. Even though it belongs in a franchise of action films and was written as a mystery-thriller, it’s shot as if it’s a horror film. The music is haunting, the color scheme is brooding and every camera angle seems to evoke a sense of unease. Even the more low key moments, such as when John leaves the hospital, is framed in a way that reeks of menace. Then you’ll have the more ‘out there’ moments, like the sado-maso club, which allows the director to go all out with style. The violence is gruesome and critics have felt that it was excessive. Personally, I thought the gore was part of its dread-filled atmosphere, so had a context. The director is pretty creative with some of his choices, although they don’t always work. The careless strobe light effect was interesting, but it also was headache inducing (and I’m not even epileptic). The finale is definitely a highlight, its primary action sequence resembling something out of a nightmare. One of the most iconic images will be of Van Damme’s creepy face paint as he has his final confrontation with John. I wouldn’t go so far to call “Universal Soldier: Day of Reckoning” a full blown horror film, but it definitely has the elements of one. 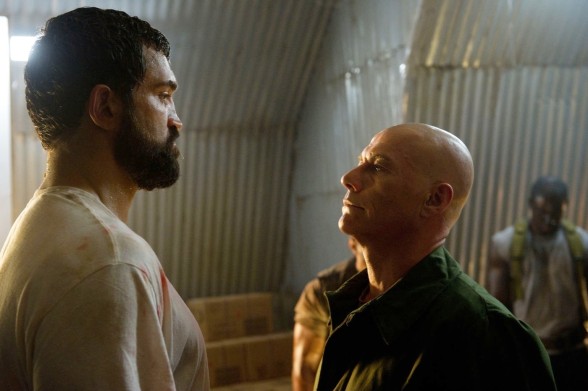 Even though there isn’t a lot of action, when it happens, IT HAPPENS. For those who felt Scott Adkins could’ve done better with his fights in “The Expendables 2” and “Assassination Games“, this is a fine return to form for him. He gets to show off some stylish techniques and the fights have advanced choreography. The camerawork and editing is tight, but it never becomes incomprehensible. Instead, it makes the combat that much more intense and exciting.  My favorite scene has to be the sports center battle, where Adkins and Andrei ‘The Pitbull’ utterly destroy each-other. They even fight with baseball bats as if they were swords! Actually, Adkins has a few confrontations with the Pitbull and I thought there was a nice balance of traditional choreography and graphic violence. The react to each-others techniques smoothly, but the first fight alone has Adkins losing a few fingers and Andrei getting his toes chopped off. Ouch! The finale also allows Adkins to show off his range as a martial artist, using hand-to-hand techniques, grapples, weapons and gimmicks. The director captures all of this perfectly, using few takes as possible. His showdown with Dolph Lundgren isn’t as spectacular as the ‘Van Damme Vs Lundgren’ struggle in “Universal Soldier: Regeneration“, but considering aging has slowed Lundgren down considerably, I thought it was pretty cool. Some have complained about the much anticipated match between Adkins and Van Damme, but I liked it. It’s not as polished as their previous battle from “The Shepherd“, but I thought it flowed well and was incredibly violent. You can’t go wrong with people hacking each-other up with machetes! There are also some bloody gun massacres and a slick car chase, but once again, you CANNOT expect a lot of action. “Universal Soldier: Day of Reckoning” emphasizes quality over quantity.

With all of this said, I don’t want to give you the impression that “Universal Soldier: Day of Reckoning” is a great film. Even if you dismiss fanboy gripes, such as the change in tone, the slow pace, the minimal Van Damme screen-time (it’s pretty much an extended cameo), the unusual development of Luc Deveraux’s character and his sudden alliance with past enemies, there are many genuine flaws. The dialogue is trying to be cerebral and thought provoking, but instead of being that, it just feels like it’s really trying to sound cerebral and thought provoking. There definitely is a lot of talking, but very little of that amounts to real substance. I felt there were a few too many unneeded subplots- like that stripper-love interest- which added very little- despite devouring a healthy amount of time. They convolute the story to such an extent that sometimes it is way too hard to follow. As much as I don’t want to say this, “Universal Soldier” was made to appeal to us simple, action-craving buffoons. I respect that the filmmakers are trying to make a smarter, different kind of film, but maybe they took it a bit too far. I can’t decide whether “Day of Reckoning” is confusing, or if I just hadn’t expected to use my brain, so was thrown off guard. I guess I won’t really know until I give it a second viewing. Had they slimmed down the plot threads just a bit, I think its core ideas would’ve become stronger and more engaging. I also think the director held a few too many shots for too long, although I can’t bring myself to hold this against the movie too much, as I had just previously seen “Kickboxer 2“. That made an artform out of bad pacing, so that mistep didn’t bother as much as it usually would’ve.

Would I say “Universal Soldier: Day of Reckoning” is a good film? I dunno. Maybe. Probably. It doesn’t matter. You’re either going to hate it for changing so much about the franchise, or you will love it for taking the series in a new direction. I doubt the majority of the viewers will even consider the objective quality. I can’t totally blame them, as I’m still weirded out and I always obsess over objectivity. “Universal Soldier: Day of Reckoning” probably should be put in a straight jacket, because watching it will cause your head to explode. But whether fury or elation is responsible for that, I don’t know. It left me baffled, but intrigued. It makes missteps, but also has impressive successes. It’s ambitions are so…cool, that it’s biggest fault is lacking the skill to completely fill that inspiration. But in the end, I liked “Universal Soldier: Day of Reckoning“. I liked the action, the horror, the science fiction, the ambiguity, the madness and the fact that I’m not entirely sure how to respond to it. I look at it as an interesting experiment, but one that probably shouldn’t become the template for future “Universal Soldier” movies. This style is way too easy to f@ck up and even if the filmmakers recreate the films madness, it will get old over time. Yet I am new filled with hope for the franchise, as the filmmakers are clearly willing to take risks and that is a rarity when you have a ‘successful’ formula.

Nudity: Quite a bit during the sado-maso club sequence.

Overall: You will either like or hate “Universal Soldier: Day of Reckoning“, but I’d still recommend it because at least it’s different.