(Written by RZA and Eli Roth) 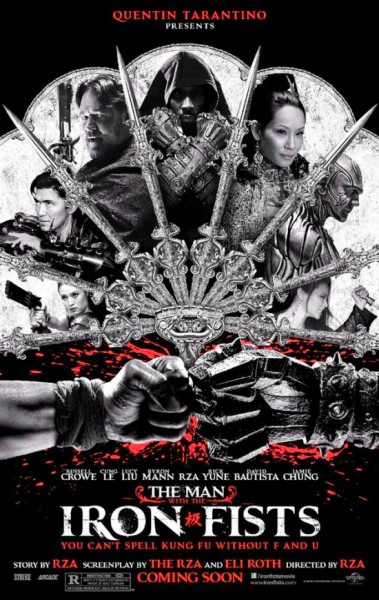 Plot: A Blacksmith (RZA), a rogue soldier (Russell Crowe) and a powerful swordsman (Rick Yune) team up to defeat a deadly gang, who has stolen gold from the Government.

Ah, entertainment, you do have your limitations. “The Man With the Iron Fists” looked like It could either by a lark designed just for me, or a disaster that’s even more frustrating because it seemed like a lark, designed just for me. I mean, how could a kung fu opus filled with blood, guts and tits ever disappoint me? Oh, it’s directed by a rapper? Well, RZA is a huge fan of the genre, so that could work. Wait? He’s also starring in the feature? Now we have a problem. “The Man With the Iron Fists” is unapologetically entertaining, containing just about everything I wanted out of it. It’s also very flawed. You can practically see the fanboyish glee dripping from every frame, but RZA and Roth let their enthusiasm derail the project. Maybe they should’ve spent more time smoothing out the script instead of spending countless hours designing the weapons. Luckily, all I require to enjoy myself is violence, kung fu and naked women. “The Man with the Iron Fists” gave me all three.

I’ve been thinking of a good way to explain the fight scenes and have come to the conclusion that it’s best to make some comparisons. The most traditional form of martial choreography is the gritty dance (Jet Li, Jackie Chan, Donnie Yen), where all of the movements are in perfect unison. Lately, the most popular style seems to be brutal realism (Tony Jaa, Bruce Lee), where we pay attention to how authentic the hits appear. “The Man With the Iron Fists” blends less popular techniques and ultimately does its own thing. It utilizes wire work (which was huge in the 90’s), CGI (a trend Zack Snyder was supposed to have begun) and gore (“Riki-Oh“, but without practical effects). The fighting styles are rather absurd and you can tell that RZA was more interested in fantasy than reality. Instead of the Tiger Palm and Crane Fist styles clashing, it’s “man with literal iron arms” and “dude who can make his body metallic” who are in mortal combat. The movements are all pretty sluggish, but it’s probably because some guy is about to have his head punched off. I say this with complete neutrality, as I am willing to accept most forms of cinematic martial arts. “The Man With the Iron Fists” is intended to be silly and the fight choreography represents that. The action is plentiful too, so enjoying the movie comes down to whether or not you enjoyed the battles.

My issue wasn’t with the action, it was with the erratic nature of the story. I respect that it’s trying to be an ensemble piece, but because they cut down the running time from 240 minutes to 90 (!!), it makes the film seem sloppy and unfocused. The protagonist is the nameless blacksmith (RZA), who even gets the title named after him. RZA’s acting is pretty flat, but it almost feels like he realized this, so dedicated more screen-time to everyone else. During the first half, we’re learning about The Golden Lion’s deception, the Gemini Killers, Brass Body (Dave Bautista), Jack Knife (Russell Crowe), Madam Blossom (Lucy Liu), Zen Yi (Rick Yune) and other side characters who impact the story. The fucking main character feels like a side thought during all of this set-up. Sure, he’s the narrator and it will occasionally cut to him, so we’ll remember that he exists. But I swear, sometimes it feels like the victim fodder (such as the Gemini Killers) had more to do than him. Yet he suddenly becomes prominent during the second half. His back-story was awkwardly placed and his development meant nothing. They should’ve either kept him an enigma, the mysterious warrior who brings everyone together or began with his life as a slave. Instead, the blacksmith is rather obtrusive and when he suddenly becomes the hero, the pacing started slowing down. RZA isn’t even a martial artist and his fight scene is predictably lame, but he GETS THE FINAL BATTLE! Now that I think about it, the final fights involving the protagonists were disappointing. It’s sad when Lucy Liu steals the show at the end. 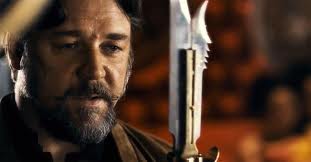 I feel that RZA and Roth did a good job when it came to creating plenty of interesting characters. If they’re not well written, then at least the actors are given a lot of room to have fun with the roles. The acting isn’t always good, although I suppose it fits the context. Russell Crowe and Lucy Liu were awesome, delivering the best performances. I’m thrilled to say that Crowe doesn’t treat the material as if its beneath him. I also loved Rick Yune and Byron Mann (Silver Lion). Each character has their own journey, but compressed in such a short running time, it’s obvious that a lot of material was left on the cutting room floor. I presume the original cut balanced everything much more efficiently, so editing it out was a double edged sword. A movie like this shouldn’t be more than 90 minutes, so what the fuck were Eli and RZA thinking when they were writing the script?! If you’re going to remove anything, remove the Gemini Killer or Wolf Clan scenes. This kind of shit causes the narrative to collapse under its own ambitions, which harms the pacing. I will give the film credit where it’s due though. The score- when it’s not rap- fits nicely. The music has elements of those old chop-socky features, but also will occasionally show off a western-themed tune. While I think reviewers have exaggerated on how gorgeous the sets are, they’re still pretty impressive when you consider the low budget. The brothel is very colorful and looks like something you would’ve seen in an old 1970’s kung fu movie. Since I brought it up earlier, the weapon designs are flashy, but I don’t see why so much time was spent on them. Finally, there is a lot of nudity and sex. RZA seems to know how to please a crowd, but I have to presume his ego demanded that he be in the movie. He just lacks the charisma to carry the weight of a motion picture. His inexperience in writing/directing meant that he crammed all of his ideas into a single film, when it should’ve been a series of films (or a mini-series). Roth and RZA have all the necessary creativity, but have yet to figure out how to use it.

Violence: Rated R. It’s not groundbreaking or anything, but it is pretty graphic.

Nudity: Lots of it. Far sleazier than I expected.

Overall: If you think it sounds like it could be fun, then “The Man With the Iron Fists” is probably for you. Just expect some flaws.