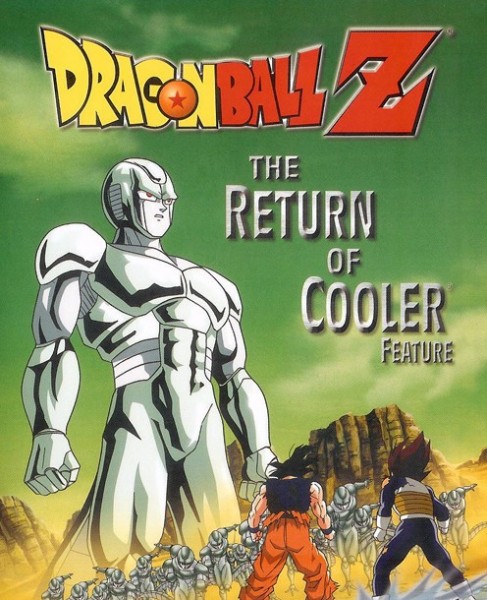 Plot: The Big Gete Star, a robotic planet/spaceship, seeks to consume Neo-Namek. Goku and his allies choose to venture to the planet and stop this malevolent force, only to come face-to-face with an old enemy…

I’ve noticed a pattern amongst these Dragonball Z serial films. I thoroughly enjoyed “Dead Zone” (movie 1), but didn’t care much for “The World’s Strongest Man” (Movie 2). DBZ found redemption with “The Tree of Might” (movie 3), only to encounter damnation with “Lord Slug” (movie 4). Yet positive feelings would return with “Cooler’s Revenge” (movie 5), so does that mean “Dragonball Z: The Return of Cooler” will be the misstep? When I was younger, back during my fanboy days, I actually preferred this over Cooler’s previous debut, so I’d presume the pattern was destined to be broken…I was wrong…”The Return of Cooler” actually does boast a truly awesome premise, but instead of fleshing out what could’ve been an engaging story, it rushes to the fight scenes. The action itself is acceptable, but the movie constantly beat me over the head with its wasted ideas, souring the experience.

“The Return of Cooler” teases us with the idea that it is trying to be a real (short) film, by actually doing a decent job at setting up the primary situation. We see the Namekians being overtaken by the Big Gete Star, followed by a humorous introduction to our heroes. Yet even amidst the joking and goofing around, there is a deep feeling of dread. I could only swoon over the atmosphere present in this serial film, even if I was still scratching my head. Goku has brought his strongest allies to help him in combat, like Picollo, Gohan, Krillin, Master…erm, Master Roshi? Yajerobi? Oolong? Um, why not the guys who are still modestly relevant? Like Yamcha or Tien? But Oolong? You might as well drag along Bulma too! But outside of that stupidity, I was convinced this would be a happy experience until the gang intercepted a direct assault on the Namekians. I just felt they arrived too quickly. More time should’ve been dedicated to the robots terrorizing our poor space slugs, while the heroes land on the planet, only to find it mostly deserted. It would be very foreboding and maybe even a little chilling. Then we have Cooler, who is introduced way too quickly. Yes, his grand entrance does have some oomph to it, but I felt they should’ve dealt with the robots BEFORE running into Cooler. From there, it’s just a lot of fighting even though unlike its predecessor, there is an actual plot to work with. Why were those other robots even there? Cooler or the Big Geti Star doesn’t really need them. I think they were just around so Gohan, Krillin and Picollo would have something to do, but they’re destroyed rather anti-climatically. Ugh, speaking of which, the actual climax was also a big letdown. I liked the idea of it, as it would provide a different kind of battle, but then after so much buildup, it just…stops. Considering that Metal Cooler might be the most broken villain in the history of Dragonball Z, you’d think this would be one of their most intense battles. But victory is only achieved by…really stupid writing. 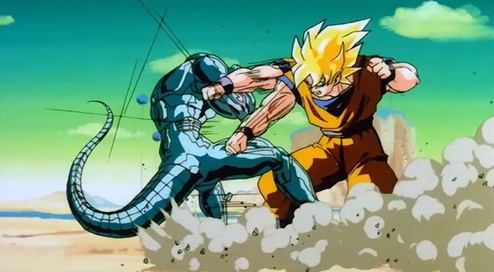 Goku has reverted to be a boring hero…again…I also thought it was strange that he seemed to be more powerful than Picollo- who is a super namek now. Picollo should be MUCH stronger than Goku, but I guess it’s silly to really consider this films placement within the actual canon. Picollo gets to beat up weaklings, but when he gets to have a real fight, it’s off-screen. You’d think he’d play a bigger role when Namek is involved, but whatever…Can’t take away from the Super Saiyan thunder, I guess…Speaking of which, Vegeta has made his official movie debut! Sweet! But he kind of sucks!…Shit! Goku gets to have an epic battle with Cooler, but once Vegeta arrives, he gets beaten up- even though he’s also a Super Saiyan- and needs Goku to save him. That’s just…disappointing…Krillin gets to be the joke once more, although at least he gets to do SOME damage. Gohan is a prevalent character throughout most of these films, but it’s as if the writers have no idea what to do with him. Once again, he takes on some fodder, but doesn’t get any major battle. Actually, Gohan is probably at his least important in “The Return of Cooler“. A random side note, Yajerobi gets a bigger role than usual, but was it just me or did he act out-of-character? He’s shockingly brave compared to what we’re used too. As for Metal Cooler himself, he does get a few good lines and at least this time, he poses a major threat. This variation of Cooler actually gets to show that he is MUCH stronger than his brother by this point, but his intellect has gone downhill and he is utilized very awkwardly. Much of the failure of the character is attributed to the failure of “The Return of Cooler” when it came to exploring its own story.

At least “The Return of Cooler” is still more enjoyable than “The World’s Strongest Man” and “Lord Slug” though.

The animation does occasionally resort to the cutting corner tactics of the TV show and some shots just look terrible. I noticed that the characters often went off-model too. But other times the film is just as lavish as one would expect a bigger budgeted animated movie to be. I never felt like I was watching a compilation of stills and the backgrounds were actual drawings- not just black or obscured in shadows. The fight scenes are good, but I can’t really think of anything to say in that regard. “Cooler’s Revenge” boasted far more creative and exciting battles, but that doesn’t mean “The Return of Cooler” sucked when it came to this. If anything, the techno stuff was kind of cool, but none of the fight scenes really blew me away. There are moments of inspired direction and memorable action spots. I also thought the dubbing was very good and the dialogue was surprisingly clever, considering that there isn’t much room for conversation. Some of the lines were incredibly funny too, like when a robot is talking about chopping people up. But the best part of “The Return of Cooler” is the score. DBZ has always had a strong soundtrack, but for some reason, it stood out much more here. Each tune matched the imagery and it’s the kind of music that I wouldn’t mind listening to on its own. It can be foreboding, evoke hopelessness, can be inspiring and charming. I loved it all and that was my anchor to the film.

Now even though I’ve spent the majority of my review complaining, I have to pull the “even though it’s bad, I kind of like it” bullshit I often criticize other reviewers of doing. As a DBZ fanboy, even if I’m just currently running on nostalgia fumes, I thought “The Return of Cooler” was serviceable. It gave me enough good action (and Vegeta), so I can’t be too angry. The problem is just that I saw so much potential to be more than a cash-in serial flick. This story could’ve been FREAKING AWESOME if it was fleshed out, focusing more on the characters and their reactions as they realize they are facing an enemy who is FAR more powerful than anyone they have ever faced. There were a lot of opportunities for Cooler to leave a hardcore splash on the fandom by his actions, not just the hype. But in the end, the filmmakers didn’t want it to be anything more than ‘acceptable’ DBZ fare. The big geti star idea is wasted, the techno-spin on the action is wasted, Cooler himself is wasted and one of the major selling points are wasted. This movie would be the first time we would see TWO super Saiyans working together, but it almost seemed like Cooler had an easier time fighting two over one. Hell, “The Return of Cooler” has also resorted to recycling past ideas/visuals. Do you really think Metal Cooler would exist if there was no mecha Frieza? At least I will give them credit for creating a different kind of android transformation though. Even when Vegeta kicks Metal Cooler off of Goku in a way that resembled him kicking Android 19 off of Goku, the presentation was different. Yet I was constantly debating with this films’ story choices, which outweighed my appreciation of the action…Still, it never attains the nirvana of stupidity achieved by “The World’s Strongest Man” and it wasn’t as lazy as “Lord Slug“. It’s competent in almost every level, but doesn’t excel in any level…unless you count wasted potential.

Violence: There are a few cringe inducing scenes, actually.

Overall: “Dragonball Z: The Return of Cooler” was a big step down from its immediate predecessor, but is still watchable if you’re a fan. I just wanted more out of it.