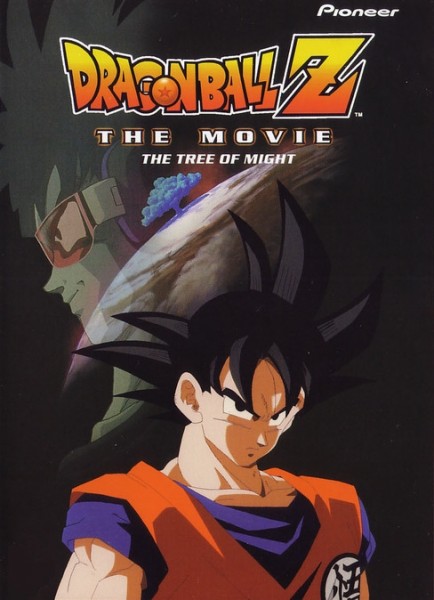 Plot: A group of space pirates lead by a Saiyan called Turles, plant the mystical tree of might on Earth, which will give them power but suck up all of the planet’s lifeforce in the process. Goku and his allies must band together in order to repel these invaders.

“The Tree of Might” holds a special place deep within my heart because it was the first “Dragonball” movie I ever watched and I believe I actually viewed it during my early fandom days. Sure, even then I was confused as to how these movie could exist within the continuity of the TV show, but the writers obviously didn’t care so nor should you. But nostalgia isn’t the only thing that follows around “The Tree of Might“, because I also BURNT myself out on this movie as a kid. You see, DBZ was going through that awkward phase where it was changing hands, so the TV show kept stopping during the Ginyu force arc before starting all over. So I hungered FOR MORE, yet either the internet wasn’t as popular as it is now or I simply lacked access to a computer, so the local video store was the only place I could get my fix…BUT they only carried “The Tree of Might“, meaning I watched this movie A LOT. Eventually I got sick of it, even before I started to get sick of “Dragonball” in general. So did nostalgia or over-exposure effect my feelings regarding “Dragonball Z: The Tree of Might” in the long run? No, not really. It seems like it wants to be more epic than your usual serial film, yet the characters are wasted and the story ends abruptly…yet it’s also more epic than its predecessors and I was consistently entertained- despite its ‘too long, yet not long enough’ runningtime. I have to confess though that I’m debating cutting this month short. I feel like I am going to run out of things to say regarding DBZ and…I’m already getting tired of this franchise.

One thing that sets “The Tree of Might” apart from its predecessors and even many of its followers is how large it is in scale. Whereas Garlic Jr and Dr. Wheelo wished to take over the world, Turles wants to destroy it- seeing it as nothing but food. But what makes this work is that you see the effect these baddies are having on the planet, while Garlic Jr and Wheelo never were able to do anything overtly devestating in the long run. The shots of the planet dying are at times really haunting and there’s a feeling of hopelessness about its atmosphere. It’s funny because you don’t need to have seen the flick to know how it will end, but every time I watch it I’m surprised at how I chew my nails and do all that clichéd criticy stuff whenever it seems like all is lost. There’s an intensity that both “Dead Zone” and “The World’s Strongest Man” lacked. They had Goku overcome their enemy after a brief struggle, but here Goku constantly seems to be on the defensive. Even better, he gets the SHIT kicked out of him. This meant that “The Tree of Might” had suspense, which is pretty impressive considering there isn’t enough time to really flesh out the storyline, which likely would’ve made the suspense hit even harder. 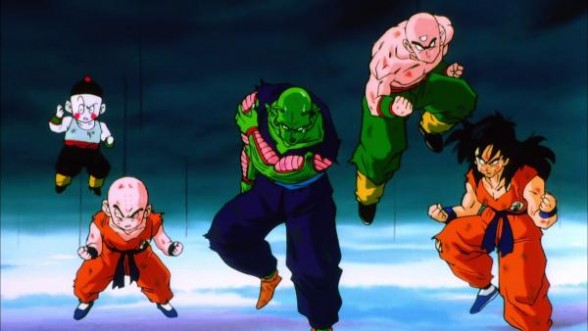 I credit much of the success in this regard to the villains, whom we can actually take seriously this time around. Sure, these guys aren’t as entertaining as Garlic Jr and his cronies, but they are more threatening. Turles is the only villain whom we feel stands a chance at crushing our heroes and unlike Garlic Jr, he isn’t defeated by plot induced stupidity. Even though he does have a tendency to give Bond villain speeches when he should just be killing Goku, it’s sort of justified as you presume that he THINKS he’s killed Goku. He constantly expresses irritation that Goku survived his attacks and even when he does gloat, Goku’s never able to take advantage of it. Turtles’s arrogance and snide remakes give him a personality, which automatically puts him above Dr. Wheelo. My only complaint with him is that he looks identical to Goku. I understand the reasoning, which could’ve been awesome if more time was spent on developing the character, but it ends up being more of a red herring. He’s supposed to be an alternative to Goku, like ‘what if Goku didn’t hit his head as a child and disable his murderous impulses’? But outside of his design, it’s never explored, so I thought it was more distracting than anything. I also found his “Saiyans never perish” line to be really ironic. His henchman all have cool designs and aren’t dull, but I wish they were given more to do in terms of fighting. Most of their battles are off-screen, so even if the pay-off was a little weak with them, at least they sold their nefarious ambitions.

The animation quality is…uneven. At times, it does excel, particularly in the scenes of mass destruction that is caused by the tree of might. In those moments, there would be a lot of detail to the crumbling buildings. Other times though, it can be pretty awful- even moreso than it’s immediate predecessor. During these moments, characters would be treated as part of the backgrounds, as if they’re frozen in place.  Am I watching colored manga stills or an animated movie? But for the most part it’s…acceptable. At least they don’t try to obscure the backgrounds in shadows and the ki effects were cool. Even though speed lines have begun to take over the action by this point, they’re used in a way that did make me think ‘wow, these guys are fast’ instead of ‘wow, these animators are being lazy’. The fight scenes are more intense and violent than usual, especially when Goku takes on Ape-Gohan, but I also felt they were a bit one-sided. The villains dispose of the Z-fighters quickly, Picollo is trashed so swiftly that he almost began to resemble Krillin, and round 1 of Turles vs Goku was a bit uninspired. Having Turles bob his head around while Goku punches is kind of…boring. Round 2 just has Turles tossing around Goku like a joke. The closest thing to an even match is Goku vs all of the henchman. Yet even I have to concede that “The World’s Strongest Man” provided more memorable battles. What makes “The Tree of Might” superior as a whole though…well, include many things…but it’s also much better paced and I found everything else more interesting…The heroes, the villains, the story, the character interactions all kept my interest. Even the inferior fights from “The Tree of Might” still kept me more engaged than what “The World’s Strongest Man” offered. 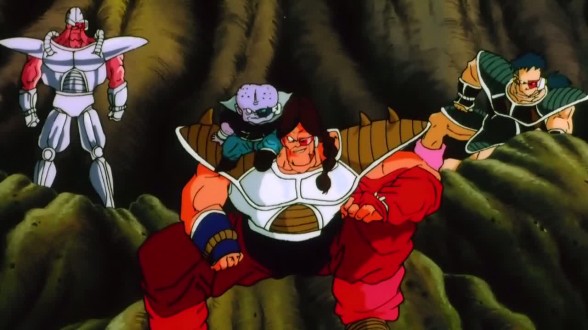 Even though I liked the story, it’s still nothing special. If you’re not a fan of this franchise or aren’t familiar with it, the story will be a shallow excuse for everyone to fight. But it also felt like it was worthy of the Dragonball name, containing what we want out of it and introducing some unique elements while never feeling too out there. There aren’t as many moments of crappy writing as well, like Garlic Jr summoning the one technique that could backfire on him or…anything from “The World’s Strongest Man“. The worst part would probably be how Turles claims that destroying his fake moon would keep him from transforming…which is true, but according to canon, it should also revert Gohan to his normal self. That didn’t bother me too much because it felt more like an oversight, but hawk eyed fans might notice. Goku and Gohan get the most prominent roles, although Gohan drops out of relevance during the final act. Gohan is officially a badass, reacting instead of cowering, but he’s also kind of a prick in this movie. Gohan intercepts a beam that was aimed for an unconscious Chiaotzu, defeats the villain, but only expresses concern for his pet dragon even though the last we saw of Chaotzu had him plummeting from a great distance to the ground. Or what about how his Father’s words can’t reach him when he’s in crazy ape form and he tortures Goku in his madness…only to be calmed down by his newly acquired pet dragon…Maybe this implies some dark internal conflict going on within Gohan, as Goku can be a deadbeat and his Mother can be an overbearing bitch, but something tells me it’s just weak character writing. At least a lot of the other Z-warriors get to help out a bit, with Yamcha, Tien and Chiaotzu (along with Krillin and Picollo) having decent roles. Once again, their fights are mostly off-screen, but I think it’s fitting that a storyline which involves the fate of the world includes all the other fighters.

“Dragonball Z: The Tree of Might” could’ve used some polishing in regards to its often crude animation and the fights were more akin to Squash matches than the epic battles they should be. There is a lot of potential within this story and its characters, especially in regards to Turles and Goku being so alike. If they really wanted to drive that point home, couldn’t they have included a scene of Turles eating like Goku? Or maybe they could emphasize Turles’s love for fighting? Bad saiyans claim to love combat, but evidence suggests they really love bullying, as they tend to get pissy and underhanded when things turn against them. But “The Tree of Might” is fun because the villains are imposing and you feel how much is on the line, based on the villains actions and the heroes reactions. It pulled me into this conflict and never lost me, even when the fights were a letdown and it showed no interested in reaching its full potential. I think I prefer “Dead Zone“, because its surreal visuals and dynamic battles left a deeper impression on me, but “The Tree of Might” is just as entertaining.

Violence: Some scenes are pretty grisly.

Nudity: You see Gohan completely naked, complete with child penis. It’s not as creepy in Japan as it would be anywhere else.

Overall: “Dragonball Z: The Tree of Might” is a lot of fun, but it’s also a missed opportunity as it has some really good ideas backing it that are never properly explored.