Plot: A space nomad named Lord Slug arrives on Earth and intends to convert the planet into a new space ship, so it’s up to Goku, Gohan and Picollo to stop him.

The story almost seems cool in its premise form, as it’s about space nomads attempting to convert a planet into a freaking spaceship. That sounds awesome, but it’s executed in a way that sucks up all originality from the concept. For one, Lord Slug is pretty much Space King Picollo. Seriously, they re-use the ‘eternal youth’ story, although it’s rushed in such a way that I wonder why they even bothered. The focus is more on what he wants to do to Earth anyway, so why rub our faces in the lack of creativity? I guess they had to shoehorn the dragonballs in there somehow…While Turles and Slug have very different plans for the planet, the overall effect is very similar. They are using it for fuel, which causes nature to die off- but the frosty wasteland created by Slug is nowhere near as haunting as the decaying Earth from “The Tree of Might“. There’s no sense of atmosphere about it, nor does it really effect the plot. I suspect it was just an excuse to give the animators less to do for the backgrounds (what’s easier to draw? Ice or cities?). Slug himself starts off kind of interesting, as I like how sophisticated and polite he could be (while also being a complete monster), but once he regains his youth he becomes a rather generic villain. He’s eeeeevil and does eeeeevil things and likes to do his eeeeevil laugh. He’s pretty dull, but having an eeeeevil personality is still three steps above the boringness of Dr. Wheelo. A few versions of this film claims he is comparable to- if not stronger than- Frieza, which is horseshit. Slug struggled against fake Super Saiyan Goku while Frieza was comparable to real Super Saiyan Goku. Maybe King Kai is just unreliable. Slug’s henchman are archetypes, which is hilariously parodied in “Dragonball Z abridged“. Even though they get decent buildup, they’re taken out way too easily and their powers/designs are just kind of…bleh. I’ll take the offensive Native American stereotype, that mutant-robot or Garlic Jr’s fruity lackeys any day over these compilations of yawns.

Somehow, Goku has become an even MORE boring invincible hero at this point. “The World’s Strongest” might’ve begun this trend, but at least even that movie showed scenes of Goku being playful and goofy- a major part of his characterization. “Lord Slug” doesn’t give Goku any time to be Goku. He’s immediately thrown into the action, which never stops, so he’s a prop used to deliver action scenes. I also felt he did too much. Come on, at least let Krillin or Gohan defeat one of the primary henchman. Picollo gets to have a reasonably substantial role compared to “The Tree of Might” and this is probably the last movie where he gets to be more than just the Dragonball equivalent to a jobber. Gohan has reverted to his annoying self, delivering a stupid musical number that made me appreciate his previous forays into music. At least those were surreal and trippy. He also has taken a few steps back in the power department, being unable to take on Slug’s equivalent of Storm Troopers. I thought it was strange that he’s so prominent during the first half, even moreso than Goku or Picollo, but practically vanishes during the second half. That’s bad writing. Krillin shows up to be the token joke once more and this pissed me off because he acts out-of-character in order to sell the gag. Krillin has always been really good at sensing power levels and he’s even better when deducing he has no chance, but he takes on Lord Slug directly? Ugh, this is why I’m not the biggest Krillin fan in the world…It was nice of the writer to have Chi-Chi kick a little ass. It’s nowhere near as amazing as Master Roshi’s nostalgia-driven comeback from “The World’s Strongest“, but her fans should be pleased. The funimation dubbing isn’t very good, although no one has anything to work with as the dialogue is pretty awful…Did Bulma seriously just call someone a geek? I hear the original Japanese version is superior, so maybe you should watch that instead…Or you can save yourself an hour and not watch it at all…

The only thing anyone remembers about “Dragonball Z: Lord Slug” is the false Super Saiyan transformation, although it earned that nickname retroactively. “Lord Slug” was apparently produced before Goku went Super Saiyan in canon, so the filmmakers took a guess as to how it would look. Even if it only distorts the continuity even more, as you will go insane before you figure out when this event is supposed to have taken place, it could’ve worked…except it doesn’t have any fanfare or grand introduction. Whenever someone acquires a new transformation in the TV show, it’s always an emotional and powerful scene. Example, in the next movie, Goku only achieves Super Saiyan form after he has been totally beaten. He has an inner monologue, watches his friends get hurt and a bird fall from the sky as tragic music plays. Here, the focus is on Slug as he attacks Goku and suddenly Goku has his golden aura…I don’t know what’s worse, the lack of build up to this ability or that it peters out after one minute. He beats on Slug a bit before powering down and getting his ass handed to him again. You’d think with Slug entering his Super Namekian form, there would be some sort of ‘Super Namek’ Vs ‘Super Saiyan’ battle, but no…Transformed Goku fights normal Slug and transformed Slug fights normal Goku. If you listen carefully, you can hear the sounds of wasted potential being flushed down the cinematic toilet. Thescript does contain some questionable writing, like how apparently the villains can track down the dragonballs long before the heroes arrive. Where is Tien and Yamcha throughout all of this? The whole whistling plot device was pretty stupid too…We’re really supposed to believe no one has whistled around Picollo before? Also, if characters can transfer their power to someone else, why don’t they do this all the time? Wouldn’t it make sense for the supporting cast to just donate their energy to Goku from the beginning? In the show, they can restore lost energy using this method, but in the movies it seems to make the receiver even stronger than they were before. Ugh, and “Lord Slug” isn’t even the worst offender in regards to this cheap, lazy, deux ex machina skill. Yet I will concede that these holes are minor and didn’t effect my (lack of) enjoyment of the feature. In fact, the previous three flicks had more moments of brain aneurism-inducing stupidity, even if I think they’re superior overall. 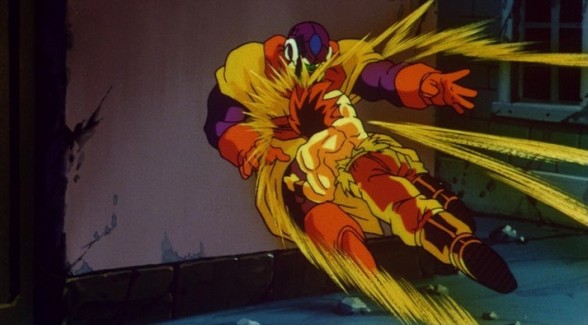 The animation is standard, although there are a few moments where Slug’s carnage does look surprisingly detailed. The backgrounds sometimes just aren’t generically icy. Sometimes Tokyo seems to be the major inspiration, which is a little unique. But it’s never really appealing to look at, unlike “Dead Zone“, where the strange backgrounds are pretty cool. “Lord Slug” was the movie where the filmmakers finally fully embraced cutting corners, which ranges from speed lines to characters resembling manga panels, etc. It’s not any worse than what the TV show delivered, but I expect more from a ‘movie’. The action is typical DBZ fighting, although once again, everything is boringly one sided. The only entertaining fight is when Picollo trashes one of the villains. It’s awesome because it’s brutal and I wish Picollo was able to do more of that. Also, was it just me or did many of these confrontations resemble previous fights- both from the movies and TV shows? The direction is very uninspired. When Goku was introduced in previous films, it was always a cool and fun entrance. Here, he’s just…there! The spirit bomb finale (also derivative from the last movie) is also strangely anti-climactic. Once again, when Goku used it on Turles or Dr. Wheelo, it was a very dramatic and epic sequence. But here, Goku gathers energy in about two seconds immediately after deciding he has to resort to it, which robs the finisher of any kind of impact. “Lord Slug” doesn’t want to leave an impression on you as much as it just wants to get itself over with. There aren’t any memorably cool moments, which were even present in “The World’s Strongest“- another bad serial film. The previous flicks boasted lighting which reflected the mood, but “Lord Slug” is statically lit. There’s no sense of atmosphere or emotional tension. Did anybody behind the scenes even care about this project? Or did they just care about the deadline?

Throughout the entire ‘Goku vs Slug’ battle, I was wondering why Goku wasn’t using Kaoken. That ability became obsolete once Super Saiyan was achieved, but based on the dialogue, Goku has never used that before. I presumed maybe he was doing it all along, but simply wasn’t calling it out, which is what happens during the Frieza arc- which this movie takes the place of. But eventually he does yell “KAO-KEN!” and utilize the technique, which helps him kick Slug’s ass. But he only does it after the tides of the battle have turned in his favor, so why didn’t he do it earlier? When he really needed it? I suspect the icy weather was impeding his ability to pull it off, but why couldn’t the movie say that? I’ll tell you why: “Dragonball Z: Lord Slug” was released the same year as “Tree of Might”, suggesting it was either the B-picture that was being produced at the same time, or it was rushed in development after the success of its predecessor. I’d presume it’s the latter, considering how much this borrowed from “The Tree of Might“. So either way, the filmmakers probably didn’t have the time or resources to make anything special. They had to resort to using previous ideas, battle templates and character designs- obviously not caring about the things which didn’t make sense. To make up for the lack of effort and creativity, they made “Lord Slug” into one big action sequence. But nonstop fighting does eventually get old and the flick burns itself out really quickly.. “Dragonball Z: Lord Slug” is just a cash grab, coasting off of the creative fumes from its predecessors- both the movies and the TV show. I find that level of laziness to be inexcusable…At least it’s short though.

Violence: PG-13 worthy I guess. It does have some grisly moments.

Overall: “Dragonball Z: Lord Slug” is probably the worst animated Dragonball Z movie, but I am actually in the minority here as most fans consider the ‘Bio-Broli’ flick to be inferior.