“A Good Man” is…not a very good movie, although it doesn’t necessarily fit my definition of cinematic waste either. If I had watched this five years ago, I might even have given it a passing grade, because it is a step up from his lower level works of the time period. I mean, yeah- if you watch “Against the Dark“, “Flight of Fury” or…anything he did between 2004 and 2009, you’re going to at least concede that “A Good Man” is the more technically accomplished film. The problem is that my standards have changed since then. Steven Seagal’s awful film output changed the way I looked at cinema in general, giving passing grades to bad films because he set the bar so low for the action genre. Eventually I decided that I was being too kind and the ‘2-star’ Steven Seagal movies- which only earned that rating because they were less awful- did not deserve to be called mediocre. “A Good Man” might be ‘above average’ compared to the majority of Seagal’s direct-to-DVD output, but it’s ‘below average’ as a direct-to-DVD actioner.

I’ve heard that “A Good Man” actually was intended to be a sequel to “Force of Execution“, although I didn’t notice any real connections between the two. However, much like that film, this seems to be more of a vehicle for Victor Webster than it is a traditional Steven Seagal opus…sort of. I liked Webster as he seems to be a reasonably good actor, has a distinct voice and shows off some solid martial arts skills. While his fight scenes are nothing exceptional, the choreography is acceptable and I liked that he constantly gets his ass kicked even in the battles he comes out on top of. It makes him more vulnerable, while never allowing you to forget that he is a bad-ass. However, “A Good Man” is still much more of a Steven Seagal movie than “Force of Execution” was. He has more screen-time, has a more relevant role within the story and participates in the final battle. Seagal’s acting is okay. At least he isn’t dubbed over by someone else and has some conviction backing his lines. I do like how director Keoni Waxman amplifies his presence with those empowering shots and Seagal handles that blade pretty smoothly. The ‘Sword vs Knife’ fight seems very unfair in retrospect, but it was pretty slick and Seagal’s fight scenes weren’t…terrible, I guess. Waxman still speeds up that camera, but if any body doubles were used, I didn’t notice. The problem is…Was it just me or did it seem like “A Good Man” was forgetting who the protagonist was supposed to be? Alexander (Steven Seagal) starts off as our typical main character, participating in boring love stories and bonding with his future girlfriends little sister. But at some point, it’s like Alexander is forgotten and suddenly Sasha (Victor Webster) becomes the primary focus and steals the show from Seagal…before Alexander retains his top spot during the ending. It makes the narrative seem so disjointed and made me personally wish that Victor Webster was the real hero instead of the boringly invincible Steven Seagal. “Force of Execution” might have been a wreck in terms of story, but I did think it was a step in the right direction for Seagal. It’s perfectly acceptable to play a supporting role, while being top billed and allowing a younger, potential action star to carry the bulk of the work. “Maximum Conviction” also did a better job at balancing the leading roles between Seagal and Stone Cold Steve Austin. “A Good Man” just feels indecisive. 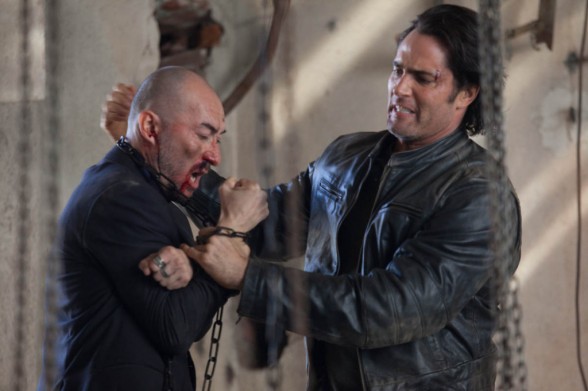 The story is nothing much…although it isn’t as jumbled as “Force of Execution“. We’ve seen this storyline done many times before, but nothing really stood out here- for better or worse. The villains prefer talking over shooting, which is a level of dumb I’m used too. While I kind of respect how they’re trying to focus on the good and evil which exists in everyone, it’s executed on such a pedestrian level that it’s more silly than thought provoking. Seagal is never called out on his actions, although Steven Seagal’s characters often get away with this. The bad guy gives a speech about how he will do bad things because he can, which is followed by an awful speech about how Seagal taught him the error of his ways. I’m not really sure why they needed that cop subplot, although it does tie into the whole ‘clash of the protagonists’ criticism I made earlier. They only interact with Sasha. I’m beginning to wonder if Sasha and Alexander were originally the same character and they were split in two when Seagal came aboard. MAYBE! I also felt that revealing who the ‘White Ghost’ was so early on was a missed opportunity, although I’m sure anyone could have seen that coming. The dialogue sucks, although it’s strange how it goes from overwritten to underwritten. During the first act, the writer is trying to make the lines sound cool and hip, which feels forced. But during the rest of the movie, it becomes so lazy. They never try to mask the exposition, so it also feels forced- but in a different way. The acting is atrocious, but mainly by the bit players. Tzi Ma is pretty good and I’ve already discussed the two leads. The love interest was weak and her little sister either ruined every scene she was in…or redeemed every scene she was in as she provided some unintentional hilarity. Maybe it’s the language barrier though. I’m not going to pick on a little kid and at least she isn’t the worst in the film…The guy who confronted Seagal in the club has that honor.

Otherwise, there isn’t much else to say. Keoni Waxman’s direction is mostly competent, but unexceptional. The action scenes aren’t really exciting, but I could always tell what was going on. The narrative isn’t riveting, but I was never bored either. It’s acceptably paced. The ending is involves Seagal having sex, which is…gross…Why was that there? You really want to go out on that note? That’s the second Steven Seagal flick to end with an unwanted love scene. Generally though, there isn’t a whole lot for me to say. The only aspect of “A Good Man” that stands out is that Seagal has done worse! But I thought Seagal’s projects were moving beyond this as of late, even if they didn’t always work. I enjoyed “Maximum Conviction” and “A Dangerous Man“. “Force of Execution” was sloppy, but I felt everyone involved was trying their hardest to make a compelling movie. “A Good Man” is very bland and uninspired in comparison, while offering little to even make fun of. As I’ve said, in the past it might’ve escaped with a 2-star rating, but my standards have risen from those depths and I am know longer to easy.

Nudity: There might’ve been some considering how many strip club sequences there were. Lots of sexuality.

Overall: If you’re a Steven Seagal completist, such as myself, then nothing I say will stop you from watching it. Just don’t expect much. If you’re a casual fan or anyone else, I wouldn’t bother.