Plot: Two former black ops specialists (Steven Seagal and Steve Austin) are hired to decommission an old prison. But before they can escort the remaining prisoners to their new locations, a trained team of elite killers break in and search for one of the detainees. Who will come out on top? Oh wait, Steven Seagal is here? There’s your answer.

I have an addiction. But it is not to LSD, Meth or Cocaine. My drug is far more destructive. I am addicted too…Direct-to-DVD Steven Seagal movies. Please do not judge me. My family held an intervention, showing me the fine works of Jackie Chan and Jet Li in a futile effort to get me to kick my disease. When those failed, they even showed Steven Seagal’s earlier efforts, such as “Under Siege”. But even that didn’t work, for I did not want to see a lean, mean passionate Seagal participating in good action scenes. I wanted bloated, body double-ridden Seagal participating in poorly staged action scenes that are incomprehensible thanks to bad lighting and cruddy editing. THAT IS THE SEAGAL I KNOW! In all seriousness, Steven Seagal’s direct-to-DVD output has had a negative effect on how I look at cinema. I’ve been way too forgiving in the past, giving passable ratings to “Dragonball Evolution” and “The Last Airbender”, simply because Seagal had lowered the bar so much. Yet in the past few years, something miraculous happened. Seagal actually started to give a shit about his career again and his movies went from unwatchable to…mediocre. Okay, so we’re not quite on the level of enjoyability, but…it’s a start.

“Maximum Conviction” was interesting because Seagal was going to co-star with a fellow direct-to-DVD leading man, (Stone Cold) Steve Austin. I haven’t had a lot of experience with Austin outside of his theatrical releases (“The Expendables”, “The Longest Yard”: He played supporting roles in both) and his wrestling career (I used to be a big WWF fan), but the thought of Seagal sharing screentime with him seemed like an interesting idea. Keoni Waxman, who is apparently becoming Seagal’s favorite director to use, was brought in to helm this collaboration. Waxman had previously directed “A Dangerous Man”, one of the FEW direct-to-DVD Seagal movies that I actually kind of liked. He also did “The Keeper”, which I don’t really remember, but apparently gave a passable rating too….So…looking good! Amusingly, “Maximum Conviction” is actually fairly decent. However, Seagal deserves none of the credit here. The weight of the feature is held up by the supporting cast, the writer and the director. If anything, Seagal kept “Maximum Conviction” from reaching its full potential. Then again, watching him play off of Austin is…interesting. So his presence wasn’t a total loss. 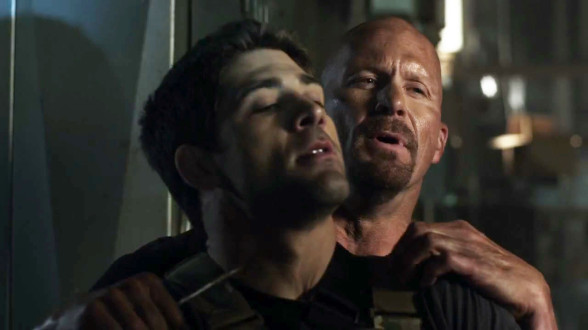 Steven Seagal shows a little bit of personality early on, or at least that’s what I mistakenly presumed. When he’s interacting with Austin, I thought he seemed more lively compared to the former wrestler. Austin really struggles with his more talky moments. Instead of ‘acting’, it really feels like he’s just trying to remember his lines. I guess I have to give Seagal some credit. He lacks energy in his delivery, but Seagal sounds…well, more natural than Austin does. However, over time, I became used to Austin’s performance and he was acceptable when he only had to say a piece of dialogue at a time. Austin probably does get the worst line (“No pain, no gain”), but he redeems himself by having the funniest moment in the entire movie (Hint: “My future ex-wife”). I won’t say they had chemistry, but both men highlight the others weaknesses. Austin’s listless line reading will make you appreciate Seagal’s acting abilities. But Austin’s physical presence magnifies Seagal’s obesity, showing how out of shape he really is. Austin is a much more believable action hero and his action scenes are passable. But Seagal is just doing his normal bullshit and whereas Austin at least gets knocked out once, Seagal is WAY too invincible. I’ve said this many times before, but I’d love to see Seagal get knocked down in a fight. Why does he think that one sided battles are fun?

There’s nothing especially inspired about the action or story, but I’ve always been a sucker for these kinds of plots where characters are trapped in a secluded location. Waxman does a competent- if uninspired job- with the action sequences. The best we can hope for with the fights is one person to be reasonably athletic. But while some of these guys have some good moves, their enemies don’t put up much of a struggle. Oddly, the only evenly matched struggle comes from two minor characters in the control room. There’s nothing refined about the choreography, but it’s fairly intense BECAUSE we aren’t entirely sure who will come out on top. I guess I shouldn’t complain, as at least these confrontations are coherent. It’s become a trademark of Seagal’s films to have jittery camerawork, shoddy lighting and overly tightened editing. Thankfully, “Maximum Conviction” is not guilty of any of those flaws. In fact, the only issue I had with the direction was those weird transitions. Just before a scene cuts away, there will be a post production effect that turns everything orange-y. For some reason, this kind of shit is prominent in the world of Direct-to-DVD actioners.

Yet what made “Maximum Conviction” fairly enjoyable was the pacing. The build-up during the first act is well executed. They tease us with some story, but we’re not entirely sure where the conflict is going to come from…well, at least until Michael Pare arrives. But only because he’s Michael Pare and why else would he be present if he wasn’t the villain? Still, it had my interest, so that’s fine. Once the action starts, it never really stops. There is very little character development, no real love story…just guys kicking ass. But it’s not exhausting either. The film wisely knows when to slow down so we can have a breather, but before long, people are getting shot and punched once again. Pacing is arguably the most important aspect of the action film, but it’s the most difficult to pull off. It requires a certain level of refinement that I don’t believe the director has. Something tells me the filmmakers just got lucky, but even if that’s true, it doesn’t matter. “Maximum Conviction” might not be “The Last Stand” (or the more recent “Olympus Has Fallen“) when it comes to entertainment value, but it was a more enjoyable romp than “Bullet to the Head” or ESPECIALLY that awful “A Good Day to Die Hard“.

The supporting cast was much better than I would’ve expected, although now that I think about it, Seagal usually has done a decent job of surrounding himself with better actors. There will be a questionable casting decision here and there. The female guard was awful, but Michael Pare’s awesomeness made up for it. Poor Michael Pare. He was a failed star, but he is a pretty good actor and definitely delivers the best performance in this movie. Nevertheless, everyone did a pretty good job at keeping the events exciting. Even Steve Austin. But not Steven Seagal. There are a lot of characters, many of them unnecessary, but the writer somehow managed to balance their screen-time fairly well. It’s almost as if you’re watching an ensemble piece, but Seagal and Austin- ironically, two of the weaker actors- simply had the most to do.

I’m glad to state that while my addiction hasn’t necessarily dissipated, at least it doesn’t feel quite as destructive. “Maximum Conviction” is MUCH better than the majority of Seagal’s works, even if Seagal isn’t putting anymore effort into it. Maybe one day I can be proud of my fandom. One day…But I don’t think you should expect much from “Maximum Conviction“. For the most part, the majority of the viewers don’t look upon it any better than the majority of Seagal’s direct-to-DVD works. I do find myself wondering if I am falling back into my old habits, giving the film a reasonably positive review, simply because “Flight of Fury” exists. But here is my defense: I know why I hate Steven Seagal’s films. I hate the camerawork, lighting, editing, the self indulgent stories, the blandness, Seagal’s laziness and his Gary-Stu attributes. While Seagal is just as boring as usual, the other actors/characters were much more compelling. I didn’t mind the camerawork, lighting, editing and story…so I thought it was okay. I do sincerely believe that “Maximum Conviction” is one the best films he’s done in years, even if I wouldn’t call it ‘good’. Sure, “Machete” (if that counts) is better. If I were to compare it to “A Dangerous Man“, I’d say that one had more high points, but also more low points. “Maximum Conviction” fit my definition of harmless, if somewhat entertaining, action-fluff. Nothing spectacular. Nothing horrendous. Just…okay.

Nudity: None. Although there is an attempted rape.

Overall: Watch “Maximum Conviction” if you want to see one of Steven Seagal’s better direct-to-DVD actioners, or if you’re a fan of Steve Austin. Don’t expect anything on par with Seagal’s older films, but it’s better than the majority of his output.